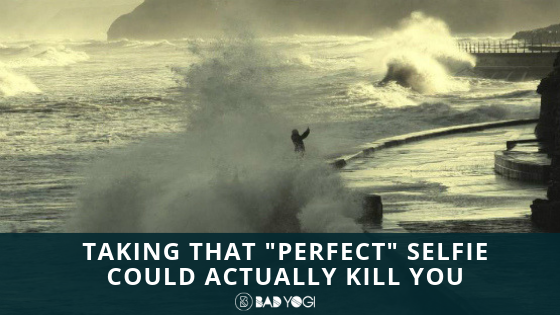 Taking That “Perfect” Selfie Could Actually Kill You

We’ve all been there – going out of our way (and comfort zone) to take that “perfect selfie”. We have to admit that we all like to post super cool pictures on Instagram that will rack up a few likes. It feels good to get a bit of attention, especially when it’s a totally crazy and insane picture, but some people tend to take it a bit too far.

Going to dangerous lengths for the perfect picture

The Independent reports that a man took a life-threatening selfie and barely escaped death in doing so. The unidentified selfie-seeker was seen taking a selfie standing on a narrow sea wall in Scarborough. The moment was captured by Michael Kaggs, an amateur photographer, who witnessed the entire spectacle from higher ground. Kaggs said that he couldn’t believe his eyes when the guy hopped onto the sea wall to take a picture. When a wave broke over the selfie taker, Kaggs thought that the wave had taken the man down with it, and was ready to call the coastguard when he saw the man casually walking away. According to him, the guy is lucky to be alive. 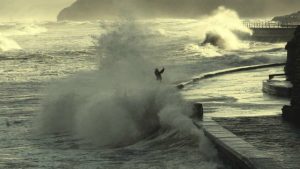 Selfies have been killing a lot of people

This is not the first time someone risked their life for the perfect selfie. Last year, a global study showed that 259 people died taking selfies between 2011 and 2017. Many of these deaths resulted from people taking crazy pictures from vantage points. That’s a shocking number and can definitely be added to the list of “dumb ways to die”.

A spokesperson for the Maritime and Coastguard Agency urged people to remember that no picture is worth risking your life for. The ocean’s fast-moving water knocks you off your feet within seconds after which you could potentially be swept into the sea. Even if you’re a champion swimmer, the cold shock and the action of the waves will only give you a few minutes of survival time, and rescue teams won’t be able to reach you before it’s too late.

There’s no such thing as perfection

This is a good time to remember that the “perfection” we often see on social media is nothing but a ruse. Don’t compare your pictures to other people’s crazy adventure pictures. With the right angle, anything can look epic. Instead of risking your life for the perfect picture on the edge of a cliff, rather take a picture of your beautiful surroundings. You can even try to forget about social media for a while. The pressure of having to share everything to prove that it actually happened is nonsense. It’s probably a good idea to actually start to take in all the beauty around you using only your eyes, instead of seeing everything through a camera lens, because honestly, were you even really there if you were just staring at your phone the whole time?

Think before you act

If in the future you find yourself tempted to take some crazy picture to put on the gram, remember that no “cool” picture is going to matter when you lose your life because of it. Your phone will go down with you and not only will you never be able to post that picture, but you also won’t be around to take another cool, and much safer one.