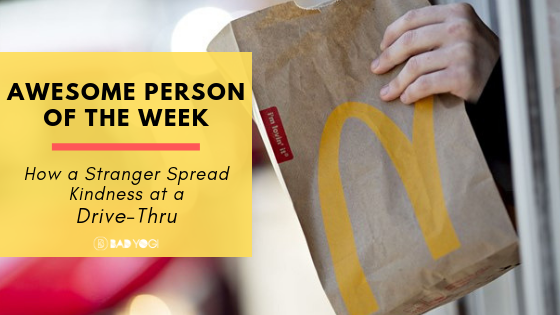 Awesome Person of the Week: How a Stranger Spread Kindness at a Drive-Thru

Heidi Goforth and her son decided to go get breakfast at McDonald’s on an ordinary Sunday morning in Tennessee. When it was their turn to pay at the end of the drive-thru, they found that it had already been paid for by the woman who was before them. They were pretty baffled, until they received their receipt.

Doing something kind out of the blue

We all like to pay it forward every now and then – whether it be because we want to do some good or spread some joy or honor someone we lost. Today reports that Goforth’s meal was paid for by Caryn Scherm Hill, who was missing her son terribly that morning. He is busy with his military training, and far from home. Hill wanted so much to be able to have some breakfast with him, but when she saw the family in the car behind her, she decided to buy them some breakfast, since she couldn’t buy it for her son. She wrote a little note on their receipt that read: “My son is in the airforce [sic]. I can’t buy him breakfast so I bought yours [sic]. Have a blessed day.”

Sharing it on social media

Goforth found the message and gesture so touching that she shared it on Facebook. The caption read: “I just had this happen to me. It touched my heart sooo much! I was buying breakfast for my son at McDonald’s and the sweet lady in front of me, in the drive-thru, paid for my meal. I pray that you see your son soon! He’s lucky to have a mom that loves him so much! God bless you and him! Tell him thank you for his service.”

The post garnered quite a bit of attention, with many people applauding the kind act. Hill also saw the post eventually, and she hopped onto the comment section to tell Goforth that it had been an absolute pleasure, adding, “Kindness can create such a wave of emotion. How extra special that you were getting breakfast for your son!!! My son has 17 days remaining in Basic Military Training, testing this week and BEAST WEEK next. I will see him at graduation very soon.”

It’s clear that Hill was quite touched by Goforth’s reaction, and so were many others. After Hill saw all the amazing comments, she admitted that it had made her a bit teary-eyed. She added that her son is going to laugh when he sees the Facebook post, because her family loves to do random acts of kindness. 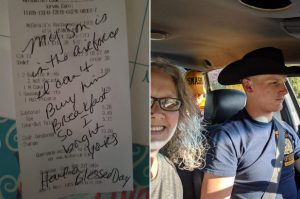 Caryn Scherm Hill with her son, RJ, who is currently in the military.
Image: Facebook

The start of something beautiful

Many other parents who sent their children off to the military responded to the post, with many saying that it had made their day.

What’s even more amazing is that Goforth and Hill have been communicating with each other on Facebook ever since. It seems that Hill’s small act of kindness has actually started a beautiful friendship.

You never know the impact you could have

It’s always amazing when a small act of kindness makes the news. This is another example of how social media can be used to spread a great amount of positivity. This post put a smile on so many people’s faces. Let’s all try to do our part to be kinder, and always look for ways to help others. A small act of kindness is never “small”. It always creates a ripple effect, just like Hill’s did. In the end, she made more people smile than she’d thought possible. Let’s all try to do the same.