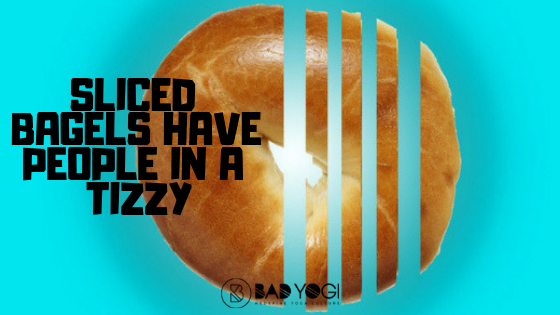 Sliced Bagels Have People in a Tizzy

There’s no arguing that bagels are absolutely freakin’ delicious. We all have our preferences when it comes to what we put on them, but one thing no one ever does is slice them. Well, almost no one, because apparently, the people who live in St Louis love theirs sliced. Yeah, we can hear you screeching with horror right now.

Are sliced bagels the best or worst idea ever?

The Guardian reports that horror over sliced bagels has taken over social media after Alek Krautmon from St Louis tweeted a photo of sliced bagels on Monday, calling it “the St Louis secret”. Before you decide to lay charges against Krautman, take a moment to appreciate the method behind his madness. According to him, slicing the bagels creates more surface area for cream cheese and the remaining slices make for amazing bagel chips with hummus. Hmmm, now that doesn’t sound half bad. Krautman called it a hit, saying that he took some to his office to share with his colleagues.

Today I introduced my coworkers to the St Louis secret of ordering bagels bread sliced. It was a hit! pic.twitter.com/XNGbljtpYz

Social media was buzzing with opinions about the bagels

People on social media freaked out when they saw the sliced bagels, even Senate minority leader Chuck Schumer didn’t buy into the idea, tweeting: “On behalf of the New York Delegation: St Louis, fuhgeddaboudit.”

Most thought that sliced bagels are the worst idea ever, and proceeded to make their thoughts heard on Twitter, with some users coming up with somewhat hilarious comebacks.

Were you immediately fired?

we’re gonna need to have a chat pic.twitter.com/99MytojJtY

Some people were so upset by the sliced bagels that they threatened to report the “crime” to the authorities.

Officer, I would like to report a crime. https://t.co/s4oFU1dNW7

I believe this is a Class A felony in New York City. And if its not, it should be. https://t.co/ngbbPFvnya

Even Dictionary.com weighed in on the situation, trying to clarify what exactly a bagel is and why it should under no circumstances be sliced.

Another user that works at a bakery tweeted that they’d refuse service to anyone who asks for a sliced bagel.

I work in a bakery that makes bread & bagels every morning…. If someone asked me to “bread slice” bagels I’d refuse service. I have standards and a healthy respect for bagels.

Then there were those who responded to the situation with a bit of wit.

1. If you didn’t buy them in New York City or New Jersey, those are not bagels.

Despite the fact that a lot of people were super upset by the sliced bagels, there were some who actually bought into the idea.

this is a good idea.

do not @ me or ill call the cops

they wont show up but my seriousbess will be illustrated https://t.co/xqHZtZ84iF

Everyone on my TL is so disgusted by this and it’s warranted but consider all that incredible surface area for butter or cream cheese https://t.co/ub91n9jwTr

Some people were delighted by the idea because it meant that bagels would work better for their dietary needs.

Hey but as a diabetic I have been told to _never_ eat bagels but with a bread sliced one I could pick out a reasonable portion and keep my blood sugar down, And anyway I don’t get why a big wodge of dough is so sacred!

As with all things that run wild on social media, some hilarious memes followed the bagel debacle, showing just how wrong it is to eat your bagels sliced.

Made some St Louis-style cereal for breakfast this morning! pic.twitter.com/vfR5CF8621

Today I introduced my coworkers to the St Louis PBJ pic.twitter.com/yEkBusJx6G

HuffPost reports that the bagels in Krautman’s photo seemed to have come from Panera Bread. They reached out to him to let him know that the next time he gets bagels from them, they’ll be on the house – and he can even have them sliced.

Hey Alek, next time bagels are on us, sliced however you’d like. 😉 Can you DM us?

Krautman definitely deserves a free bagel after accidentally promoting Panera Bread and honestly, he must still be reeling from shock after people’s reactions.

Sliced or whole, bagels are delicious

On a more serious note, slicing bagels might seem like the biggest sin ever, but if that’s your preference, you’re free to enjoy it that way. From all the posts on social media, it’s clear that most people are freaking out about the idea and don’t want a bread slicer anywhere near a bagel. Others seem to think it’s a fresh and new way to enjoy something that’s been around for ages – and don’t forget the part where you get to put more cream cheese on it. Who doesn’t love cheese? The more, the better, right? Whether you like your bagels sliced or not, there’s no judgment here and if you secretly try them sliced after reading this, know that your secret is safe with us.

Over to you – are sliced bagels the worst thing ever or is it a pretty cool idea and the perfect opportunity to get your cheese fix? Share your thoughts in the comments.