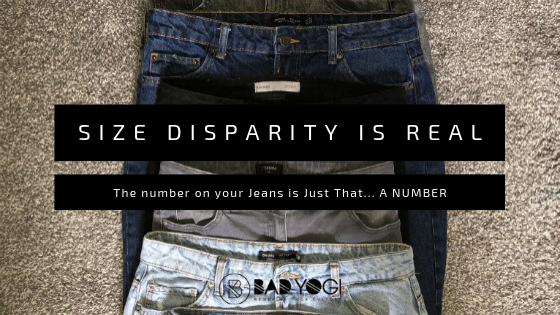 Size Disparity Is Real: The Number of Your Jeans is Just That – A Number

We all know the feeling: walking into a store, seeing a pair of jeans we fall in love with instantly and frantically rummaging through them all to find our size. Then we go and try them on, only to find that they are too small or, sometimes, too big. Frustration doesn’t begin to describe the feeling. If you wear, say, a size 12, you’d expect it to fit wherever you buy it, right? So what the heck is going on?

18-year-old Chloe Martin from Glasgow, Scotland found the answer to your burning questions. Getting ready to go out with some friends, she tried on a few of her jeans, trying to decide on one to wear. While trying them on, she noticed that some fit perfectly while she had trouble getting some of the others over her hips (we’ve all been there). Guess what, you don’t have to feel bad about that anymore. Cleary confused and frustrated, Martin took 7 pairs of jeans, all a size 12, and laid them all out together. Then she took a picture. When looking at the picture, it seems that you’re looking at different sizes of jeans, starting from the biggest size to the smallest. Guess what? They’re all the same size.

Incase you’ve ever wondered why women get so frustrated with our clothing sizes – every pair of jeans pictured, is a size 12 pic.twitter.com/V88JAPQZTI

Martin shared the image on Twitter and it has gone viral since, with many women, and even men, voicing their frustration about clothing sizes. Speaking to Today, Martin said that many people told her that the size disparity makes shopping a real issue. She added that even though the tag on jeans doesn’t affect her purchases, she knows that it’s a factor for many women when they buy new clothes.

“A lot of people wouldn’t buy something say, two sizes bigger than they normally would, even if it fits perfectly, because you could go to another store down the street and get a different pair, two sizes smaller which fit perfectly too. It’s really inconsistent.”

People all around the world have had the same experience

Anyway, back to the original tweet – I know exactly what you mean, I have clothes in my wardrobe ranging from a size 8 to a 16 – all of which fit me. Cannot figure out what size I am. I daren’t buy any clothes without trying it on – so no internet shopping for me

Honestly same!! No wonder women feel so insecure, I’ve had size 10 dresses, fit fine, then I’ll try on size 14 jeans that won’t even go past my hips, it’s not right

Welcome to “Whose Pants Are These Anyway?” Where the sizes are made up and the numbers don’t matter

Clothes sizes in general are a weird thing. I’ve had shirts ranging from M-XXL which were more or less the same size. How does that happen? oO

Martin is not the first one going public with the size disparity of clothes. Back in 2017, blogger Mira Hirsch posted side-by-side photos of herself in which she was wearing the same size pants from the same store. One fit her snugly while the other was loose. She used these images to encourage women to not let the numbers on a tag define them. Back then, another woman voiced her unhappiness about H&M’s sizing, saying that their sizes are unrealistically small when compared to other brands. Martin agrees with this, saying that she’s also found their clothes to be much smaller than those at other retailers.

“I can’t shop there, I can never find anything that fits in my size, and even if they did fit at the waist, the thigh sizes on their jeans aren’t good at all.”

Founder of Retail Prophet, Dough Stephens, says that Martin’s photo shows that there is a much larger problem. He says that it makes sense that there will be some inherent sizing differences between styles and manufacturers. The size disparity as shown in Martin’s picture, however, is a sign of the fashion industry’s pervasive and unhealthy attempts to tell women how their bodies are supposed to look and how it should be proportioned. Stephens added that “the very fact that women feel the need to size down, shows the insecurity around body image that the industry has manifested”.

Martin says that she hopes her tweet will inspire change in women’s apparel. She added that retailers should start to take a look at their sizing and settle on a set of measurements for each size. We couldn’t agree more. Having to buy a different size depending on where you shop is honestly one of the most frustrating things and it’s something that can be fixed.

There’s no denying that the fashion industry still has some ways to go when it comes to including women with all body types and sizes when designing clothes. We all want to own a pair of jeans that are just as comfy as leggings and look super awesome. The fact that most of us probably only own one or two pairs of those is proof that something needs to change. Why can’t all jeans fit like that? If the fashion industry starts to become more realistic about the proportions and sizes of women’s bodies, we’d probably have fewer women feeling the need to go on a diet or feeling like they’re not thin enough.

Martin’s tweet is a reminder that your clothes should never make you feel like your body isn’t good enough. The problem is with the clothes, not your body. Remember that. The number on that tag is just that – a number. We officially declare it null and void.