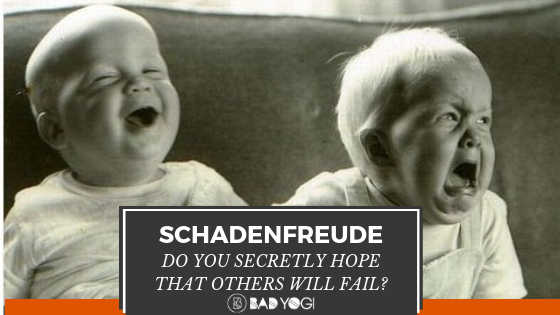 Schadenfreude: Do You Secretly Hope That Others Will Fail?

I’m going to share an unpopular opinion: People secretly want others to fail. What a gut punch. Nobody wants to think of themselves as harboring low self-esteem, hatred, negativity or sinful envy. But it’s there just beneath the smile, the “congratulations,” the attention one gives to achievers of success and happiness.

The good fortune, abundance and joy others experience can feel like there isn’t enough left over. You cling desperately to this empty bowl, terrified you’ll starve in the name of others getting more from the pot. When others fail or misfortune comes upon them you sit in the corner, gleeful smile on your face watching them trip and spill that big bowl of prosperity all over the floor.

Admitting this very secret attribute can feel like showing the grittiest parts of the human condition. It feels better to plaster a fake smile on one’s face and tuck those feelings of envy and wishful failure into a hiding place only brought out when you’re alone, not allowing even those closest to you to see it. It feels embarrassing.

I recognize this trait in myself despite my repeated efforts to push it down. When bad things happen to me or I fail, I often wonder if others are secretly happy too, sighing in the relief that it wasn’t them.

Who didn’t love watching Mark Zuckerberg face questioning from senators, squirming in his chair after all those years of making the rest of us feel inadequate for not becoming billionaires by the time we were 25? It felt like somewhat of a redemption.

As I’ve digested these feelings in myself and admitted to having them, I feel a sense of freedom from a self-imposed prison of heaviness and shame. But regardless of the fact that I’ve forgiven myself for being a human being in the most raw sense of the word, I have no desire to keep these feelings or my attachment to them.

Schadenfreude is a German word that describes the feeling of joy one feels when another person fails or experiences misfortune. Arthur Schopenhauer said that to feel joy at the misfortune of others is an evil trait in human beings and it’s related to cruelty. After reading this I wondered if Mr. Schopenhauer experienced this emotion so often he decided to denounce it in others hoping nobody would accuse him of such a diabolical emotion.

Scientists have studied schadenfreude in hopes of figuring out neurologically where it originates. In “Exploring the When and Why of Schadenfreude” scientists came up with a few theories to explain it, one of them being envy.

Let’s say you’re scrolling through Instagram and you see one of those girls with a perfect outfit, pearly white teeth on display, sexy boyfriend with his arms wrapped around her, and in her bio it says she’s going to study abroad in Italy for a year. How do you feel? I’m going to guess a little envious, wishing it was you, and secretly hoping her trip to Italy gets cancelled.

The same paper also talks about the Apollo 13 movie: “The astronaut Jim Lovell wants another opportunity to travel to the moon, but the chance has been given to fellow astronaut Alan Shepard and his crew. However, Shepard later develops an ear infection, and his crew is replaced by Lovell’s crew. This is bad news for Shepard, but Lovell’s reaction is exuberant when he rushes home to give the news to his family. Lovell shows no hint of sympathy for Shepard. The focus of his attention is on the anticipated thrill of another trip to the moon for himself. The good news happens as a result of another person’s pain, as Shepard is frustrated, even angry. Yet, for Lovell, because the end result for him is something that he craved, he experiences joy (Howard, 1995).”

It forces you to ask the question, “If something good happens to me at the expense of someone else’s happiness, does that take away from my own experience?” Most likely, not. So, not only do we experience envy related to Schadenfreude but we also experience it when it comes to rivalry.

Is schadenfreude really an “evil” trait? Or is it just a matter of the human condition just as we can’t always control jealousy or insecurity? Either way, it’s not something to beat yourself up about but a call to look inward and self-reflect on the circumstances of your life that are causing you to wish failure on others rather than feeling genuinely happy for people who have a reason to smile.

It’s harder than it looks, but how can you turn things around?

1. Pay attention to the types of failure you are wishing upon others

Is it career related? Then it may be time to re-asses your goals at work.
Is it financial? Then maybe it’s time to look at a savings plan.
Is it romantic? Hop on a dating site and put yourself out there.

2. Focus on your own life

Schadenfreude seems to come about more often when you’re focusing so much on others lives that you get stuck in a self-destructive comparison cycle.

3. Appreciate what you have

The more you focus on your own happy circumstances the less you will need others to fail to bring yourself above them.

I don’t believe schadenfreude is a some kind of diabolical, cruel trait as Arthur Schopenhauer says. I believe it’s one of those parts of human nature that we would all prefer to keep concealed behind a wall of politeness and societal expectations.

But admitting to yourself that you feel this way can be the first step in turning things around and bringing more happiness to your own life.