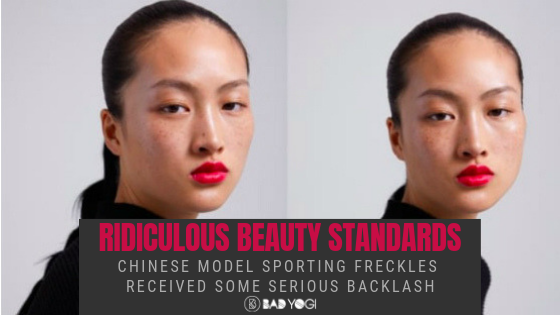 We are living in an age where women are trying to embrace their natural beauty and it seems that most cosmetic and fashion companies are trying to do the same – they have to keep up with the times after all. It does seem, however, that not all countries are as forgiving of “imperfections” as was proven a while ago when China bashed an ad from Zara featuring a Chinese model with freckles.

If you’re thinking “what the heck?”, we’re with you. Even though freckles were frequently seen as an imperfection in the past, the Western culture has pretty much accepted it, with some even calling it angel kisses. More celebrities are showing off their freckles too – but if you’re in China, it seems that you’re still required to cover them up. BBC reported that Chinese model Jing Wen attracted a lot of attention when she appeared in a campaign for a new range of cosmetics for Spanish fashion retailer Zara. She sported her freckles like a boss, but the Asian nation did not appreciate the gesture. 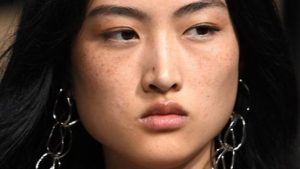 Jing Wen has accepted her freckles as a part of her and no longer hates them or feel the need to cover them up.
Image: Getty Images

The campaign sparked controversy on social media, with many saying that it was “uglifying” the Chinese people. Luckily, there were those who thought that Wen looked beautiful and used the opportunity to call for more to be done to help people in China embrace their natural beauty.

It is rare for Chinese people to have freckles and Wen, who is from the Chinese city of Guangzhou, admitted a few years prior to the campaign that she used to be very insecure about her freckles. “When I was little, I really hated them because normally Asian people don’t have them. In high school, I always tried to cover them, but now it’s ok. I like them, and that’s enough.” 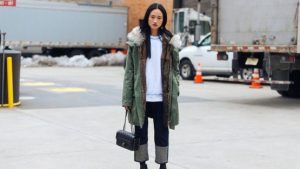 Wen has become a familiar face in the modeling world in the past five years and has modeled for famous labels like Calvin Klein and H&M. She has not responded to the controversy about the ad and we also don’t think that she needs to. Apologizing for appearing in a campaign where not even one bit of you is photoshopped is something to be proud of. It’s a brave thing to do and we’re pretty sure that Wen might have expected the controversy – being a model in China, she must know what their beauty standards are like and she must’ve guessed that showing off her freckles will offend some people. She went ahead and did it anyway. Now that’s a model to look up to.

Doing something out of the ordinary will always spark criticism

When you do something totally out of the ordinary, you usually, unfortunately, face some backlash and after the campaign launched, many said that Wen’s appearance looked “ugly” to them. Some took it even further, saying that Zara was trying to “insult” or “defame the Chinese”, saying that “such pictures featuring an Asian model with freckles and an expressionless pie-shaped face mislead Westerners’ impressions about Asian women, and can lead to racism against Asian women”.

The Zara campaign that sparked all the controversy.
Image: Zara/Sina Weibo

There clearly wasn’t a lack of criticism, but let’s be real, people are always resistant to change and this is no different. Luckily, there’s always a silver lining and in this case, it came in the form of people applauding Zara’s decision not to photoshop Wen. Thousands of Weibo users voiced their anger at her seemingly being bullied by people from her own country. Many praised Wen’s natural beauty and said that China should start doing more to show different perceptions of beauty. “The ideas of what is aesthetically pleasing is too narrow to so many people,” one user said, while another added that there should be “more aesthetic diversity” in the country.

Zara refused to apologize for photographing a model naturally

Zara also spoke out about the campaign in an interview with the popular Pear Video website. A representative from the company said that the advertisements featuring Wen weren’t just targeted at China, it was targeted at the global market as well. They added that they don’t photoshop pictures of their models and dismissed suggestions that Wen was “uglified” in the images, saying: “She has always looked like this, her face has not been photoshopped, she was photographed naturally.”

Isn’t that how it’s supposed to be? Shouldn’t this be celebrated rather than being dismissed as trying to “uglify” a certain group of people? If you have freckles and cover them up every day, it doesn’t change the fact that you have them. They’re not going anywhere. So why hide them at all? Whenever women feel like they have to hide a part of themselves, no matter how small, it’s a sign that there’s a bigger problem that needs to be addressed.

A call for change

Clearly, many among the Chinese population are ready for a change in the country’s beauty standards and if this Zara campaign can start the right kind of conversations and help people to perceive beauty differently, it was definitely worth all the controversy. Who knows, Wen might end up becoming a historic figure for being the first model who ever appeared in a campaign without covering up her freckles.

What are your thoughts on this? Do you have freckles? Do you sometimes feel like you need to cover them up? Tell us in the comments!