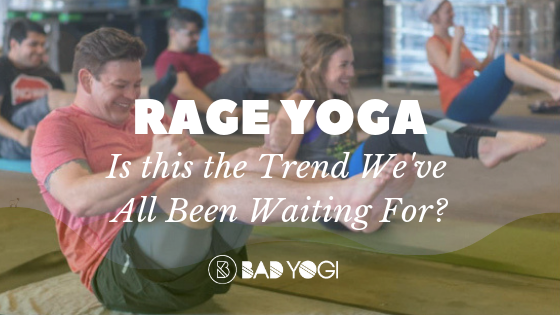 Rage Yoga: Is this the Trend We’ve All Been Waiting For?

There might be a new trend on the rise in the yoga community and if you’re a bad yogi already, you might absolutely love this. If you’re still in a place where you can’t commit to yoga or can’t bring yourself to try it because you think it’s boring, you’re about to change your mind.

Rage Yoga is here for you

Curious yet? This rising trend is anything but ordinary. Brought to you all the way from Houston, Texas by Ashley Duzich, this new form of yoga is bound to leave you feeling completely de-stressed and ready to take on the world. Get ready for Rage Yoga, where you are free to drop an F-bomb and have a sip of beer after. Yes, seriously, there’s no judgment here.

The main reason many people do yoga is because, for them, it is the key to their inner happiness and peace. If the key to your inner happiness is dropping the occasional F-bomb and shouting out the things you keep in all day, you’re going to love Duzich’s approach.  According to CBS DFW 21 News, Duzich started the initiative because she saw people’s need to have a proper place where they can just let go of all their rage and negativity.

What will Rage Yoga make me do?

So, except for dropping some F-bombs, what does Rage Yoga entail? Duzich’s description sounds much like the original approach – breathing, stretching, mudras (hand gestures used while practicing breathing exercises), and yoga postures. The difference? It involves a lot of bad humor.

The classes will help you to face what’s really bothering you head-on and release it. We all hold on to F-bombs throughout our day – whether it’s your boss being totally unfair, a colleague working on your nerves, or simply because it’s Monday, there’s always an F-bomb waiting to be dropped – and holding it in can cause you to feel super frustrated and irritated by the end of the day. Having a safe place where you can get rid of all this frustration out loud in a healthy way and then have a drink to your efforts after, can’t be anything less than good for your mental health.

It is completely legit

Even though this approach might sound totally way out, it is still real yoga taught by qualified teachers. Speaking to Scary Mommy about what inspired her to start Rage Yoga, Duzich said that she needed an outlet for all her negative energy. “I was inspired to do this when I was in a low point in my life and my regular yoga practice of 10 years was no longer serving me and allowing me to release all of the negativity I was feeling,” she said. She added that yoga itself means union, which translates to being in union with yourself, and that doesn’t always have to mean that yoga has to be a super calm practice with deep breathing. Sometimes it can be quite the opposite. That’s some serious bad yogi vibes right there.

You get to un-bite your tongue

Duzich also shared some of the funny things the people in her class have released during their Rage Yoga practice. Phrases like “I told you to do the dishes!” had her in stitches. We can totally get behind that, adding phrases like “Put your laundry in the basket, not next to it”, “Close the door behind you!”, and “You’re a complete arse!” (aimed at anyone that made you hellishly mad during the day).

Despite all the fun the practice entails for some, Duzich admits that it definitely isn’t everyone’s cup of tea. Some yogis might faint at the thought of what Duzich is doing. Mixing yoga with beer and swearing might be a hard pill to swallow for some, but we’re totally here for it. Not only will it promote your mental health substantially, but you will also get a physical workout while getting rid of all that frustration. Duzich also doesn’t recommend bringing your children to this practice, so for those who just need a kid-free moment sometime during the day – you’ve found your happy place.

Here’s hoping Rage Yoga becomes a trend, and fast too, so we can practice it all over the world – because swearing and having a beer (or a glass of red wine) and doing yoga all at the same time sounds like the stress-release we didn’t know we needed.

What are your thoughts? Is this the next big yoga trend?