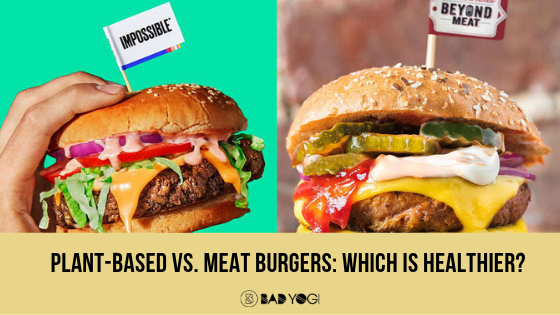 Plant-Based Vs. Meat Burgers: Which is Healthier?

It’s summer, which means that grilling season is upon us and whether you’re vegan, vegetarian, or just your typical omnivore, you probably like burgers. Recently, more plant-based “meat” options have been made available to vegans and vegetarians, but do these options really make “better” burgers? As in, are plant-based options really healthier than their meat counterparts?

The plant-based craze is real

Currently, America’s meat-free hamburger industry consists of the Impossible Burger and the Beyond Burger. According to Yahoo News, both of these products mimic the look of a normal beef patty. Whether the taste is the same is debatable. Some argue that it’s pretty good, while many people who are used to consuming meat would argue that it’s really not. Impossible Burgers are created using soy, while Beyond Burgers mainly consist of pea protein.

With many people looking to live a healthier lifestyle, plant-based products are becoming increasingly popular. Earlier this month, KFC even released its first vegan burger in parts of the UK, which, according to the Independent, sold out within four days. This new addition is called The Imposter burger and it’s made from Quorn, which is then coated in the Colonel’s famous secret recipe. The burger is served with vegan mayonnaise along with fresh iceberg lettuce and a soft-glazed bun. People were incredibly excited about it – KFC reported that the vegan burger’s sales were 500 percent higher than that of their normal burgers. The plant-based craze is clearly very real. 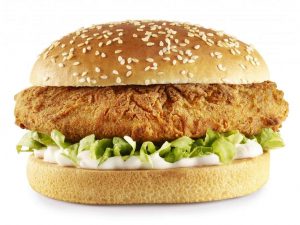 The new KFC Imposter Burger sold out within four days after its launch in the UK.
Image: KFC

Amid all the excitement surrounding plant-based meat, many are begging the question of whether these options are really healthier. According to the National Institutes of Health, part of the appeal of plant-based burgers is the fact that they don’t have any of the documented health risks associated with a normal beef patty, but just because there aren’t any documented health risks associated with plant-based meats just yet doesn’t mean that there aren’t any. According to CookingLight, the Impossible and Beyond Burgers do indeed have less cholesterol than a meat burger, but they are high in saturated fat and sodium. Plant-based foods are also a relatively new invention, which means that we don’t yet know what the long-term health effects of consuming these kinds of foods will have. 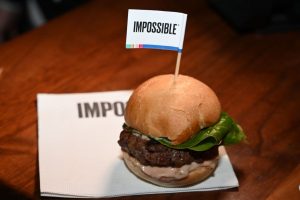 Why are they so appealing?

Something else that makes plant-based burgers more appealing to the general population is the fact that they’re completely cruelty-free and the process through which they are created is a lot more environmentally friendly because there’s no cattle farming involved. According to the Washington Post, many people switch to plant-based burgers because it’s better for climate change in the long run – replacing beef is a huge carbon win. But, ultimately, it won’t make much of a difference if cattle farming isn’t replaced by it entirely.

People who love plant-based products need to keep in mind that it’s not health food, and that a plant-based burger must be seen as an indulgence, just like any other normal burger. It can’t be consumed as a normal, everyday meal. According to Vox, a plant-based burger is about as good for you as its meat counterpart – so better keep that in mind next time you want to indulge. If you’re only switching to plant-based burgers because you think they’re healthier, you’re kidding yourself. Men’s Journal states that plant-based foods are rarely made from whole vegetables. Many of them contain protein isolated from plants – and that’s all. No vegetables there. The Guardian has also raised some concerns about consuming plant-based products, saying that it might still be a bit of a risky business since its effects on human digestion haven’t really been tested yet.

It’s all in the dressing

Ultimately, the makeup of calories in your burger will depend on how you dress it – do you top it with cheese or lettuce? Do you use a ton of mayo or just a pea-sized dot? According to USA Today, this is where the real amount of grams and fats sneak in, and when you compare a plant-based patty to a normal patty, the calories are basically the same. Both a 4-ounce Beyond Burger and an Impossible Burger add up to 270 calories each, while a lean traditional burger adds up to 287. Not much of a difference, right? If you’re looking to save up some money this summer, you’d also want to keep in mind that plant-based meats cost a lot more than traditional meat. 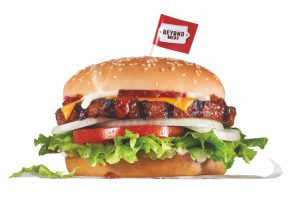 The Beyond Burger, along with the Impossible Burger, contains almost the same amount of calories as a traditional meat burger.
Image: Beyond Meat

So, is plant-based burgers really healthier than their meat counterparts? We’d say that, at the moment, they’re pretty much the same. The only difference is in the cost and the amount of research that’s been done on each of them.

We all know the health risks of consuming too much meat. We don’t know the effects plant-based products can have on our digestive systems in the long run. The calorie counts of both are basically the same, which means that neither is really worse than the other when it comes to how much calories they add to your daily diet. If you’re an avid vegan or vegetarian, these options are amazing to have. If you’re an omnivore and have been wondering for a long time whether plant-based burgers are healthier, you now have your answer. You can enjoy your meat patty with no guilt whatsoever. You and your vegan friends are getting the same amount of calories out of it, and the same amount of joy. So, go ahead and get yourself that burger and enjoy it completely guilt-free in true Bad Yogi fashion.

Over to you: Which do you prefer? Plant-based or meat burgers? Which tastes better? Tell us in the comments.