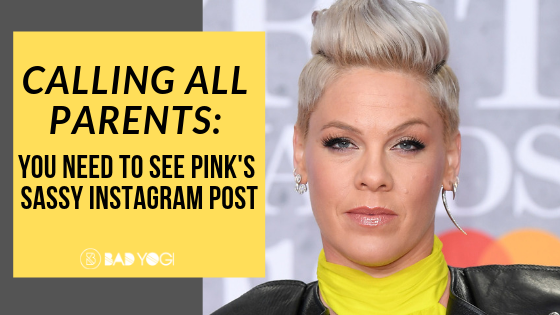 Every parent out there knows that taking on the role of parenting is no easy task. You only want what’s best for your kids and you raise them as best you can and with as much love as you can. Most parents would welcome advice from their family and close friends, but one thing most people don’t like is to have strangers tell them how bad they are at raising their kids. Well, famous singer Pink had to go through exactly that, but now she’s taken to social media with a snarky post that’s most certainly leaving the “parenting police” red in the face.

Being criticized for the silliest things

If you’ve ever been in a situation where strangers told you how bad of a mother or father you are, you’re not alone. Pink feels you. In fact, she’s had to deal with comments about her children more than once this year alone. According to Today, the flood of negative comments regarding Pink’s parenting skills started back in March, when she posted a photo of her and her kids feeding a pelican. In the picture, her 2-year-old son, Jameson, was not wearing a diaper. This infuriated people. Why exactly they were infuriated is not clear. 2-Year-olds walk around without their diapers all the time. It happens. They’re kids. They’re gonna do crazy, stupid things. That’s what 2-year-olds do. They’re a handful. They don’t care if they’re walking around naked. They don’t give a damn. In fact, we can actually learn quite a bit from 2-year-olds.

People on social media didn’t think it appropriate for little Jameson to walk around without his swim diaper, and Pink received some harsh criticism. Some people went as far as saying that someone had to call child services because his mother let him walk around without his diaper. How ridiculous is that? A bunch of complete strangers thought that they had the right to criticize Pink and her son. Really?

Pink wasn’t having it

Pink lashed back in another post later on, saying that like any other normal mother at the beach, she hadn’t noticed that he’d taken the swim diaper off.

That’s not even the most ridiculous part. March wasn’t the best month for Pink – when she shared a picture of a private family meal on Instagram, there was a fan who had an issue with that as well, and Pink ended up having some words with them. Gee, people share pictures of their families on social media all the time. Hell, some people take very frisky pictures of themselves in their bedrooms, but a celebrity posts a picture of a simple family meal on Instagram and it’s oh so bad.

Even her husband gets criticism

Pink’s husband, Carey Hart, also didn’t escape the parenting police. He got some serious backlash from fans last December after posting a picture of Jameson eating chocolate. Hell, so when you’re a celebrity’s kid you don’t even get to have a bite of chocolate? What kind of cruel world is this?

Pink admitted that the comments were hurtful

When Pink recently appeared on Ellen, she talked about the picture that sparked all the hateful comments – the one with Jameson missing his swim diaper. She admitted that the comments had been really hurtful, saying, “People went as far as saying, ‘Someone should call child services,’ because he didn’t have a diaper on, and ‘How dare I?’ — just some of the nastiest things… I cried so hard after that, because I like to share my family. … I’m prouder of my kids than anything I’ve ever done. And I just won’t share them anymore. I won’t do it.”

Give ’em a taste of their own medicine

Flash forward to the present, and Pink has decided to give the parenting police a taste of their own medicine. Her latest Instagram post features her daughter Willow, 8, running through water. Pink seemed to have decided that this was the perfect picture to clap back at all the critics, adding a bunch of sassy hashtags at the end of the post. The caption reads, “Here’s a picture of my child running through water. It wasn’t even filtered. What a waste of water. And no helmet? I hope she had sunscreen. If she slips and falls she may be traumatized for life. And her mother wasn’t even there. I was….. gasp…. working!!!! In another country!”

Here’s a picture of my child running through water. It wasn’t even filtered. What a waste of water. And no helmet? I hope she had sunscreen. If she slips and falls she may be traumatized for life. And her mother wasn’t even there. I was….. gasp…. working!!!! In another country! 🤘🏽👎🖕#instagramisfun #fucktheparentingpolice #ifyoufeellikeunfollowingpleasegoddoitquickly #opinionsarelikeassholes #somanyassholes

We think the parenting police needs some aloe vera for that burn. Pink’s husband also clapped back at critics in a similar way last year when he posted a picture of him and Jameson on a jet ski. The caption was pretty cheeky, saying, “Don’t worry parent police, he is safe and I put him right back in his bubble when we were done.”

Jameson and I idling around yesterday in ft. Lauderdale. Short ride since he was getting splashed and not to stoked. Don’t worry parent police, he is safe and I put him right back in his bubble when we were done.

All you can do is try your best

It’s not easy being a parent, especially when the whole world has its eye on you waiting for you to make a mistake and criticizing you for the most ridiculous things. The fact that Pink is defying all the haters is great. It’s a shame that she has to do it in the first place, but it’s great that she’s not allowing them to get her down.

Pink going on and doing her thing and just loving her kids as best she can serve as an inspiration to all the other parents out there who sometimes feel like they aren’t enough. Yes, we’re all human, we make mistakes. There’s no such thing as a perfect parent, but at the end of the day, all kids really want is your love and undivided attention. Give them that, and you already gave them everything they need to live a happy life.

Have you ever been a victim of the “parenting police”? Tell us in the comments.