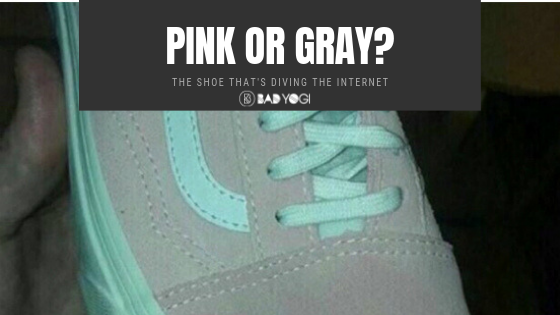 Pink or Gray: The Shoe That’s Dividing The Internet

If you were trudging around the internet this past weekend, you might have seen that there’s a brand new debate going on – and hey, was it even a productive weekend if there wasn’t a heated debate on the internet over something? This time, people are divided over the color of a sneaker that went viral back in 2017. Well, needless to say, no consensus has yet been reached on the color. 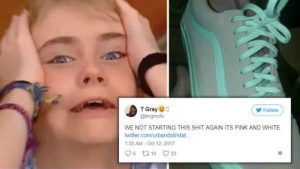 An accurate description of how we’re feeling right now.
Image: The Hook

What color is this sneaker?

Today reports that the sneaker is back for another round after CNYCentral, an NBC affiliate station in Syracuse, New York, took to Twitter on Friday to post an image of it – and it’s been keeping people busy all weekend. Some say that the sneaker is pink with white shoelaces, while others say that it’s gray with green laces. According to CNYCCentral’s tweet, people whose right brain is dominant will see the shoe in pink and white, while those whose left brain is more dominant will see it in gray and green. This is seriously cool –  there are even some people who see both colors.

Social media users are divided over the color

Twitter exploded with people all around the world saying which colors they were seeing, and of course, there’s the pink team and the gray team. But who’s to say either team is wrong?

One user said that they saw it in pink and white first, but was now seeing it in green and gray.

Actually yeah it is. When I first looked at the photo I saw teal & grey & now I'm seeing pink & white and it looks exactly like this photo. Idk how my brain did it. It's freaking me out.

Others said that the color of the shoe depended on the brightness of their phone’s screen. Interesting.

Then there were those who saw what they saw and couldn’t understand how it could possibly be a different color.

the stripe is white the pink is the entire shoE

Two years later and we still don’t have an answer

Another funny thing is that the shoe seems to be a retro women’s Vans sneaker, which, as fate would have it, is no longer available. It was once listed as “mahogany rose” (in other words, a shade of pink) on the Vans website. Then there’s the Dutch Twitter user who originally took the photo, who says that the shoes weren’t hers, but she believes it was gray and teal. Alright, so WHICH IS IT THEN?

This is not the first time the internet has been divided over the color of a certain item of clothing – let’s not forget the heated debate in 2015 over #TheDress, where no one could decide whether it was gold and white or blue and black.

From this day on, the world will be divided into two people. Blue & black, or white & gold. http://t.co/xJeR7GldwP pic.twitter.com/i6BwVzPzSZ

This makes one wonder whether people actually perceive colors differently. Perhaps we don’t see anything exactly the same way. It’s an interesting concept, but kind of impossible to wrap your head around.

Apparently, it’s all about perception

When #TheDress went viral back in 2015, eye surgeon Paul Dougherty said that it’s all a perception issue: “Everyone’s brain is different, so even though it’s the same stimulus coming in, which it is, everyone processes the information differently.” Well, it’s pretty mind-blowing. We still don’t know what the true color of that sneaker is though. Perhaps it’s both. We might never know.

What color do you see when you look at that sneaker? Let us know in the comments!