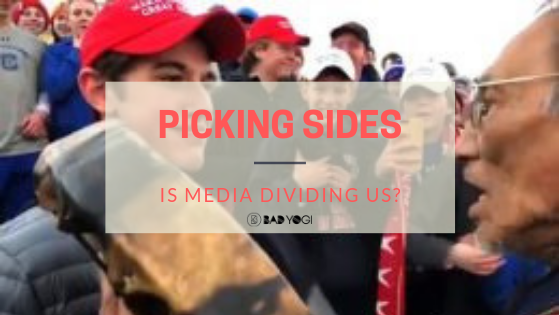 Picking Sides: Is Media Dividing Us?

Last week, students from a Kentucky Catholic School who were seemingly mocking Native Americans after a Washington rally on January 18, made headlines. After a Twitter user posted a video on their account that showed only a part of the events that took place, the situation sparked a lot more controversy than it probably should have.

The media, especially social media, have taken over our lives – whether we like to admit it or not. Looking at what took place at the march, it seems that many allow their ideas and opinions to be dictated by what they see and read without having all the facts  – and when people don’t have all the facts, misunderstandings tend to occur. 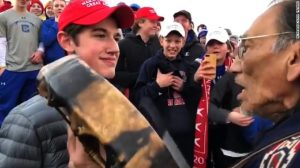 The above mentioned event took place when the Indigenous People’s March coincided with the March for Life, drawing thousands of people together. The Guardian reported that during the march, some of the Covington Catholic High School students clashed with some Native American demonstrators. A video of the confrontation started circulating on social media that appeared to show students wearing “Make America Great Again” apparel taunting the Native American demonstrators.

According to CNN Business, the video that caused all of the controversy that followed was posted by Twitter user @2020fight. It was a minute long video of the confrontation with the caption “This MAGA loser gleefully bothering a Native American protester at the Indigenous People’s March”.  This video did not show what had happened before the infamous incident took place. It also turned out that the account used a fake profile picture and reporters who asked about it was blocked by the user.

Information warfare researcher Molly McKew said that she herself shared the tweet, but realized shortly after that there was a network of anonymous accounts working together to amplify the video. She added that we have all gotten used to reacting to and engaging with social media posts in certain ways and everyone once again did with this specific tweet, spreading it far and wide. Twitter suspended the account shortly after news outlets started asking questions about it.

The bigger picture was revealed

CNN later reported that a new video had surfaced which showed what had happened before and after the incident. This put the events in an entirely new light. Looking back, there was no way anyone could have made any sort of good judgment based on a one-minute long clip that was part of something much bigger. This brings us to a very important question: does the media, especially social media, divide us?

A lot of us see a one-sided article or a one-minute video clip of a moment that is part of a much bigger event. We pass our judgments without knowing the full story. In this case, one party was made out to be guilty without anyone having all the facts. We saw the video, we saw that it seemed like the students were mocking the Native Americans, but we had no idea what happened before it or what had led to the confrontation in the first place.

Is the media dividing us?

So, when trying to answer the question of whether the media is dividing us, the answer can be quite simple: the media can most definitely divide us, but only if we let it. If we believe everything we read and see without keeping in mind that there is always more to the story, we will bump heads with people who feel differently about the situation or who actually know the whole story because they were there when it all happened. And yes, the media does tend to put us in a position where we feel like we have to pick a side. It is important to remember that we don’t have to, and if we do, we don’t have to tell everyone about it.

What can we do to change things?

We are all different, we come from various places and backgrounds and therefore we will always have our differences, but we don’t have to allow the media to draw a wedge between us as well. Sometimes it is hard to get to know the full story, sometimes we will never get to know the full story, which brings us to mindfulness. Being mindful of what you say and post on social media. You are entitled to your opinion, but before you put it out there always ask yourself these three questions: Is it kind? Is it mindful? Is it helpful?

We don’t have to allow the media to divide us. It is one of the most powerful entities in the world because it can control the minds of the masses. Perhaps it is time we start controlling it and use it to unite with one another, rather than bumping heads about events we had no control over in the first place.

What is your take on all this? Sound off in the comments!