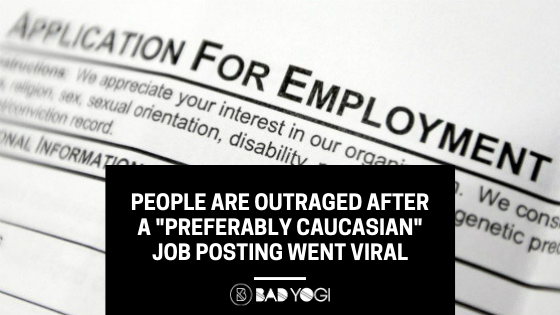 Twitter has a way of exposing all the wrongs that are going on in the world, and this time information technology company, Cynet, is facing some serious criticism for a very controversial job advertisement.

According to ABC News, the IT firm, which is based in Virginia, received some serious backlash after posting an ad for a job as a pharmaceutical accounts manager in Tampa, Florida. The ad stated that the company was looking for a candidate that is preferably Caucasian: “Preferably Caucasian who has good technical background including knowledge of RPA,” the job description read.

People were upset, and with good reason. Why should your race determine whether or not you can apply (and get) a job? There are, however, still countries where this is perfectly normal, like South Africa, but it’s usually not blatantly put in the job description. It’s also not legal to do this in America. According to NBC News, Title II of the Civil Rights Act of 1964 “makes it illegal to discriminate against a person on the basis of race, color, religion, sex, or national origin.” This is according to the Equal Employment Opportunity Commission.

People took note of the unfair job description when Twitter user Helen McCabe posted a screenshot of it, asking Cynet how they could possibly think it’s okay to post a job description like that. Twitter users quickly took to the comment section and the outrage grew. One user wrote, “That just confirms for me the conversations that are really happening that led to a posting having that content. Insane. No sympathy for the ‘mistake’ from me. This is deeply rooted.”

Uh, hey @cynetjobs – what's with this?

How could you POSSIBLY think that's okay? pic.twitter.com/DPWzpgXqqE

Another said that they are tired of companies making these kinds of mistakes and then thinking that apologizing after fixes everything: “Anyone else tired of these companies doing this and claiming it ‘does not reflect our core values.’ Just excuses. If the above is true how did this even happen?! Did the person who posted it not read it before posting?!” That’s a valid question: either the person who posted the ad didn’t think it through (or there was a massive misunderstanding), or they purposefully wanted to put the company in a bad light. Guess we’ll never know.

Cynet released a statement after the post went viral, saying that the people responsible for the discriminating job ad had been fired. They ensured the public that they will be reviewing all upcoming ads to make sure that this kind of thing doesn’t happen again.

“The individuals involved in this case were terminated immediately for a significant violation of company policy, and we have already begun a review of all currently existing and upcoming ads to ensure no similar issues exist. We are also looking at measures that could help us catch offensive or outside-of-policy ads before they ever go live to ensure this can’t happen again.”

People should be appointed according to their qualifications, not their race

The company did not reveal any specific details about the employee responsible for the ad and didn’t say whether they actually did request Caucasian candidates. Thing is, whether you put it in the ad or not, appointing someone based on their race instead of their qualifications or work ethic is just wrong. Yes, diversity in companies is important, but if you’re fair during the process of appointing a suitable candidate, the rest should take care of itself.