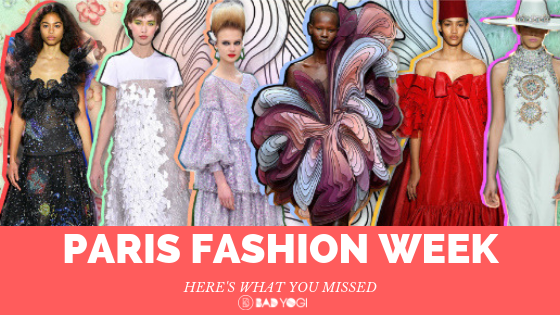 Fashionistas all over the world are well aware of the fact that Paris Fashion Week (Haute Couture) took place this week. If you are the leggings and sweater type of person with not much of an interest in fashion, you’ve probably unwillingly seen the hype on social media.

Fashion Week is known for it’s magnificent, flamboyant, and somewhat strange creations. If you are a fashion lover, you’ve probably gotten loads of new ideas to spice up your closet or wear some of your favorite accessories in a brand new way. If not, you are about to see what all the hype was about. Are these outfits worth looking at? Definitely. Practical? Absolutely not, but that’s no reason not to have a look.

Here are some of my favorite creations that were seen on the runway. Get ready to feast your eyes on some and roll your eyes at others. Either way, it’s worth looking at.

Cool and Casual with a Bit of Sparkle, Yes Please! 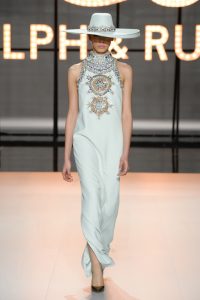 A model walks the runway during the Ralph & Russo Spring/Summer 2019 show as part of Paris Fashion Week. (Photo by Francois Durand/Getty Images)

This Ralph & Russo piece is sleek, it’s simple, and you can actually walk in it. The sequencing detail might seem a bit too much for some, but take away that and the massive hat, and this outfit could easily fit in at a formal gathering. 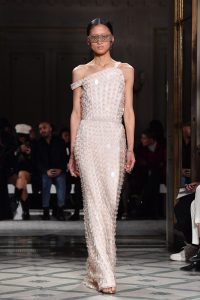 A model walks the runway during the Antonio Grimaldi Spring/Summer 2019 show as part of Paris Fashion Week. (Photo by Stephane Cardinale – Corbis/Corbis via Getty Images)

This piece from Antonio Grimaldi, caught my eye because it’s probably one of the most practical outfits that were featured. It’s an easy, not-trying-too-hard look that will turn heads. 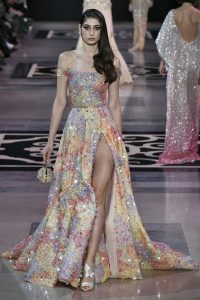 For anyone who loves all the colors of the rainbow, this dress from Georges Hobeika is worth feasting your eyes on. Just look at all that sparkle!

A Gown Fit for a Princess 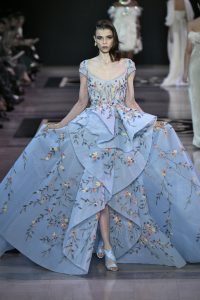 This piece, also from Georges Hobeika, looks like a Disney Princess-inspired gown. Seriously, every woman should have a chance to dress like this.

Mirror, Mirror on the Wall, Who is the Fairest of Them All? 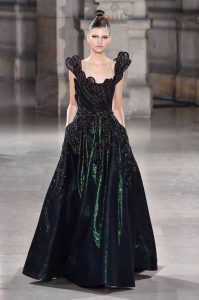 A model walks the runway during the Tony Ward Spring/Summer 2019 show as part of Paris Fashion Week. (Photo by Peter White/Getty Images)

This Tony Ward creation looks like it could’ve come straight out of a fairytale. The prettiest “villain” dress you’ll ever see.

Sassy, Classy, and a Bit Bad-Assy 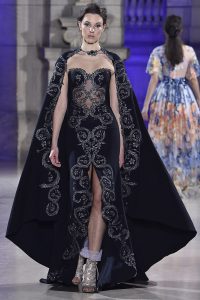 When you look at this Dany Atrache creation, two words come to mind: totally badass. Nothing makes you walk a little straighter than a dress that makes you look like a total goddess.

Leggings are for Everyone, Everywhere 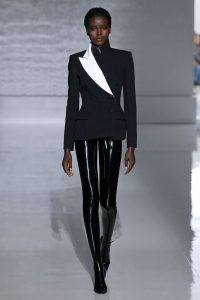 A model walks the runway during the Givenchy Haute Couture Spring/Summer 2019 fashion show as part of Paris Fashion Week. (Photo via Getty Images)

This Givenchy piece is for all the Bad Yogi’s out there who love to live in their leggings and sigh at the thought of having to put on something remotely formal. Who said you can’t wear leggings and still look super put together?

Something else that popped up at Fashion Week were dresses featuring bold messages from designers Viktor & Rolf. The Indian Express reported that these dresses quickly went viral online with women around the world loving them. The phrase “wear something that makes a statement” has now become the most literal it has ever been.

These avant-garde styled dresses in pastel colors, featuring voluminous layers of ruffles and tulle, bore various statements like “Sorry I’m late, I didn’t want to come”, “Give a damn”, and “I’m not shy, I just don’t like you”. Social media users jumped on their accounts to give their two cents about this new trend.

this right here… this is what I was meant to wear… my closet has always felt empty and I never understood why but now all is clear… bless u viktor & rolf spring 2019 couture for opening my eyes pic.twitter.com/VesqP2qMMW— sandro bitchicelli 💫✨ (@tofudoom) January 24, 2019

Lol, should I have this printed on business cards? At Viktor & Rolf SS19 Couture. https://t.co/oJQR7Bx4jd pic.twitter.com/uKwPiguA2n— Samantha Powell (@sdpowell1) January 23, 2019

One can’t deny that this is a pretty cool trend. Now, all we need is some of these dresses featuring messages like “Namaste” and “I like Bad Yogis and I cannot lie”, right?