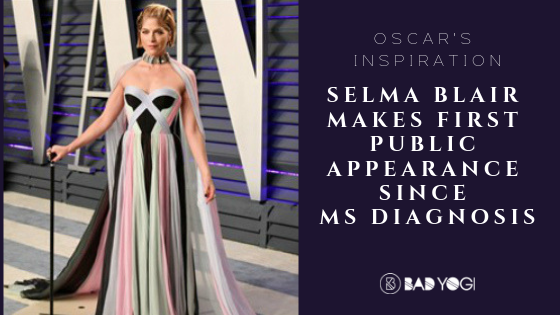 The Oscars took place on Sunday night and film enthusiasts around the world were watching the award show as it unfolded. If you’ve ever watched the Oscars, you know the only thing better than the award show itself is the red carpet looks. Today reported that this year, 46-year-old American actress Selma Blair stole some of the spotlight when she made her first public appearance since she had been diagnosed with Multiple Sclerosis (MS) in August of last year.

What is Multiple Sclerosis (MS)?

If you’ve heard of the disease before but have no idea what it entails, you’re not alone. Healthline explains it as a progressive, immune-mediated disorder. Still confused? In plain English, it basically means that the system that keeps your body healthy starts to attack the parts of your body that you use to function normally on a daily basis. The disease attacks your nerves and cells’ protective coverings which in turn leads to a decrease in the function of your spinal cord and brain.

What makes the disease truly awful to live with is its unpredictable symptoms, which often lead to patients being misdiagnosed at first. The symptoms can also vary in intensity. Common symptoms include fatigue and numbness and in severe cases, it can even cause vision loss, paralysis, and a decrease in brain function.

Selma Blair is not backing down

Blair’s appearance on the red carpet at the Vanity Fair Oscar’s Party was proof that she’s not allowing her disease to rule her life. Just last month, she admitted on her Instagram page that her illness can sometimes make it difficult to be out in public. According to Everyday Health, MS can make walking a challenge, which makes getting a cane to help you make your way around essential. Today reported that Blair appeared on the red carpet, dressed like a queen, and the cane she was using looked more like a fashion statement than anything else. 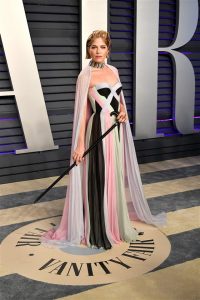 Blair had the cane custom-made for the event and gave thanks to the people who helped make it so special. She gave a shoutout to all of them on her Instagram page, thanking David Lyons for finding the perfect leather, Bic Owen for stitching it on, and Tom Bachick who put on the final magical touches. He added a pink diamond and stitched Blair’s monogram neatly onto the cane, making it truly unique. Blair was especially thrilled by this little addition, saying that it brought her to tears.

This is love 💓. @tombachik customizing my cane with my monogram and a real pink #diamond. How did I get so lucky? I wanted a special cane for #vanityfair dinner. So… @lyon_hearted went out and found patent leather and @bic_owen and he stitched it on. Hours of love put in. And then #tombachick made it especially magical. I burst into tears. These gifts to get me through. #subtle #chic #love. I can’t thank these three enough. There are angels. 🖤 #oscars2019

After being diagnosed with MS last year, Blair admitted that she regretted all of the things she had taken for granted before, like being able to do cartwheels for her son, recalling how she’s always been the most “gymnastic mom” she knew. Now she can no longer do them, her body just refuses – and it’s hard to deal with.

Thanksgiving is dwindling down for me. I stayed home. It was the right place for me today. And tears came. And lost myself in Joan Didion and the beautiful documentary by @griffindunne . Sublime. Her dedication to her life’s work ,her way of observing humanity and her ever present dignity through her writing and her presence… cracked me. I have always been grateful to her. She is so much of a person. Thank you #griffindunne and #joandidion for making this film. Thank you to @collectivemetals my forever friend for gifting me these precious gold warrior rings. @james.kennedy_ you have a 💛 of gold. Thank you @mazzhannabeauty for giving my hands some #crystallove . I want the world to have more Joan didions. More Griffin Dunnes. More James Kennedy’s and Mazz Hannah’s More Carrie Fisher , (because I just miss her every day. Knowing she could be there )More connection. More honesty. I have been grieving recently. For the things I took for granted. A cartwheel for my son being one. I was the most gymnastic mom I knew. A cartwheel was just as easy as taking a breath. But when I began to turn one yesterday on an impulse to show my son who had forgotten, it went all wrong. A jumble of confusion for this body I knew so well. A heap. A heap on the ground. And I tried to laugh. As did my son. But it was a turning point. Part of the grim realization. Is this just #ms or Is this still an exacerbation ? Five months and still same way. Or is this my new normal? And then more gets taken away. As Joan has written. The center will not hold. And as I write… neither will the rest of it. So I thank you all for propping me up. We all have something. Now how do we handle it? What do we do when the news is old but dramatically altering our lives every day? Still grateful.

Your disease doesn’t have to define you

Dealing with MS is no joke, but Blair seems to be taking it in her stride. Putting herself out there in the public eye at the Oscars just proved once again that no disease needs to keep you from living your life, and most importantly, it shouldn’t be something you are ashamed of – ever. She is surely inspiring many others who suffer from MS and other similar diseases to step out and banish the fear of appearing in public with a cane when you’re only in your 40s. We can get behind that.

Are you someone who suffers from MS or know someone who does? How do you/they deal with it? Tell us in the comments.