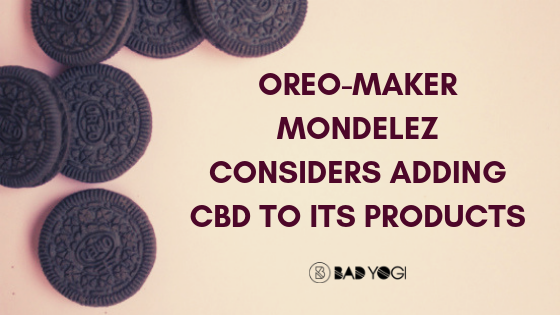 Cannabidiol (CBD) is gaining popularity at a massive speed, from adding it to your yoga practice, to some medications containing concentrated amounts of the famous compound. Now, food and drink companies are starting to look at their options, because if there’s one thing the public wants right now, it’s CBD.

Mondelez wants to add CBD to its products

Cannabis enthusiasts might see their latest wish come true after Orea-maker Mondelez announced that it considers selling CBD-infused snacks. CNBC reports that Mondelez CEO, Dirk Van de Put, said that the company is getting ready to add CBD to some of their products. “Yes, we’re getting ready, but we obviously want to stay within what is legal and play it the right way,” he said.

The popularity of CBD reached its peak after President Trump signed the farm bill into law, legalizing most products containing the compound. Companies selling products like lotions and creams jumped at the opportunity to add the oil to their respective brands. Currently, the Food and Drug Administration prohibits adding CBD to any food or beverages, but it seems that this might change sooner than most think. After facing pressure from Congress, the regulator has set a date for public hearings on the matter, which are taking place next month. Van de Put is hoping that these hearings will shed more light on the use of CBD in food, but is positive that it will hit the mainstream food market in the near future.

If the Food and Drug Administration wants food and drink companies to keep up with the public’s demand, it would probably be wise to legalize the use of CBD in some products – even if it is in small amounts. CBD and cannabis-infused food have been named the top food trend of 2019 by professional chefs. Most people turn to CBD because it is known for a number of health benefits, such as managing anxiety and easing pain. Not enough scientific research has been done to prove any of these claims, but Van de Put says that his company is looking into it.

Those hoping that Mondelez is considering adding some CBD to its famous Oreo cookies will be disappointed to hear that it’s not in the cards. Van de Put said that he doesn’t see it fit to add the compound to the company’s family brands, but the company may add the ingredient to some of its other products, or start an entirely new line.

For those who swear by CBD, the future sure is looking bright, and a bit more stress-free. Hopefully, an agreement on the use of CBD in food and beverages will be reached pretty soon.

Are you a fan of CBD? Are you disappointed that it’s not going to be added to Oreo cookies? Let us know in the comments.