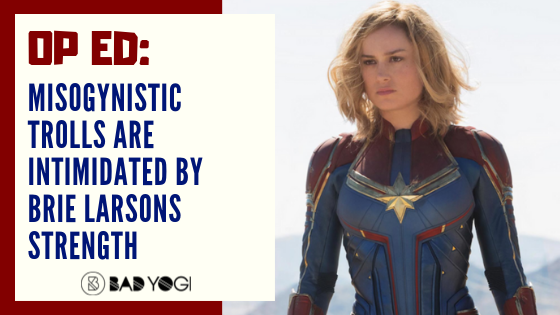 As a longtime follower of Marvel movies, of course I’ve already seen Captain Marvel. In fact, I’ve also already pre-ordered it on iTunes, and will see it again in movie theaters. While I loved the movie, that’s not what will bring me back into the movie theaters to see it again.

Rather, I’ll be going to see how anyone can possibly be leaving some of the ignorant and sexist reviews on Rotten Tomatoes that are flooding the movie review website.

As of press time, Tomatometer is giving the movie 80%, but audience reviews are just below 60% (currently 58%). This is actually an increase from 34% on Friday, March 8, when the movie opened worldwide.

It’s not uncommon for critics and fans to have different reviews, but more often than not, it’s actually the other way around. Critics will review something lower, but fans will still enjoy the movie. So why is this suspicious? Hollywood Reporter points out that the score was coming from over 58,000 reviews (by the day of its theatrical launch) which is more than Avengers: Infinity War received during its entire theatrical run. In short, most people flooding the movie review website are voting down Marvel’s first female-led superhero film without even having seen it!

The backlash towards this movie actually stems as far back as June 2018, where Larson called for more diversity in film critics.

Naturally, this pissed people off, with many criticizing Larson saying that she has it out for white dudes. But this is simply not the case. She was calling for more diversity in a currently male-driven industry. A study from the USC Annenberg School for Communication and Journalism finds that film reviewers are predominantly white and male.

How predominant, you ask? The study looked at the 100 top-grossing films in the US box office in 2017. They found that, in 19,559 reviews by critics, 77.8% were written by men and 22.2% by woman. The statistics get even worse when you start to factor in ethnicity.

In short, she’s not wrong, and she makes an absolutely valid statement. But leave it up to trolls and twisted media to allow this discussion to take a nasty turn.

If you have the stomach to read through some of the reviews on the website, you’ll see a very common theme. Rotten Tomatoes is working overtime to delete purposely hurtful reviews, so there are fewer comments literally calling for Brie Larson to “smile more” and all “SJW” (social justice warrior) reviews have been removed, but here are a handful you can find in a quick review. 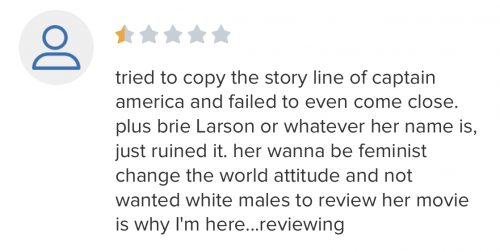 As mentioned above, many critics of the movie call for Larson to “smile more” and call out her lack of emotion in the movie. Here’s the thing, trolls, that’s literally called out in the movie. In the movie, a male motorcycle rider says to Carol Danvers (the character in the movie who becomes Captain Marvel) those exact words. There were rumors that this was a late edit add into the movie, but writers confirmed that’s not the case.

Larson commented on this during her press tour, suggesting the reaction is “part of why art that depicts the female experience is so important because on the one hand, for women and girls, it allows us to go, ‘Oh, I have that experience too.’ And those that aren’t in our bodies can look at it and go, ‘Wait, that happens to you? We gotta do better.’”

If you’ve seen the movie, there is an entire plot that explains why Captain Marvel does not show emotion- she’s literally been trained by Yon-Rogg (portrayed by actor Jude Law), who is an alien military commander “whose weakness is his jealousy of the accomplishments of others”. Yon-Rogg tells her that, because she can not control her emotions, she can not step into her own power. She works tirelessly to be able to do so, and ultimately, this is what allows her to transform into Ms. Marvel.

Rotten Tomatoes literally had to change their scoring system as a result of the misogynistic reviews. The site recently made it so that users could not post reviews before a films release. That’s because Captain Marvel was receiving 0 percent fresh audience scores long before the movie even hit theaters.

Have no fear, though. Brie’s likely sitting at home laughing herself straight to the hypothetical and literal bank. In its opening weekend, it received the 18th highest opening in history. The movie brought in $153 million in its three-day opening weekend.

My Opinion: Misogynistic Trolls Are Intimidated by Brie Larson’s Strength

It’s a shame to see that people out there are still intimidated by a strong woman using her position and voice to speak up for inequality in women’s rights. (Am I doing that exact thing right now?) Character Carol Danvers (Captain Marvel) does this through encouraging women to be anything they want to be, do anything they want to do. Brie Larson does this in stepping into this role and identifying that she is now in a place of obligation to speak up for women, and be a role model to those who need it.

I’ve never considered myself a feminist (!!!) but by definition, I absolutely am. Perhaps it’s because I’ve seen it used as if it were a bad, or super extreme, thing one too many times. In reality, the definition is “the theory of the political, economic, and social equality of the sexes”. I guess I really never considered that I was more than just human to believe that women and men can and should have the exact same opportunity, without there being some hidden entitlement/ agenda. Period. The fact that people are upset by Larson’s calls for more equal representation in film review is simply sad, and displays the equally sad truth that there’s a whole lot of sexist opinions out there.

I applaud Marvel for releasing Captain Marvel on International Women’s Day, as it’s certainly a movie showing that women can do anything that they truly set their mind to. Time and time again in the movie, Carol Danvers (Captain Marvel) finds herself in a position of failing- but she always gets back up. It’s this drive and determination that allow her to find her true (superhero) power.

More than anything, this is an empowering movie for girls and women alike, showing that women ARE strong and powerful beyond their wildest dreams. My nieces will be seeing this movie next weekend, and I’m proud that they’ll have Brie Larson, Carol Danvers and Captain Marvel as role models and inspiration as they grow up. If you believe that women’s place should still be the kitchen, this movie won’t be for you. But spoiler alert: Captain Marvel’s going to save the entire Universe, so enjoy swallowing that pill and dose of reality.

Not only does this movie set the stage for Avengers: Endgame, but it also fills in a lot of the necessary plot for movies to come. Politics or whatever aside, I thoroughly enjoyed the movie, only checking my watch 1 hour 42 minutes in, simply because I felt that time had really flown by. The movie lands around two hours in total and is a light-hearted, empowering and funny movie that I will come back to time and time again.

We see you, Brie, and we like what we’re seeing. Thank you for being a strong voice for women, especially those who are under-represented, as well as being a role model for our female youth. Have an opinion? Voice it in the comments, below.