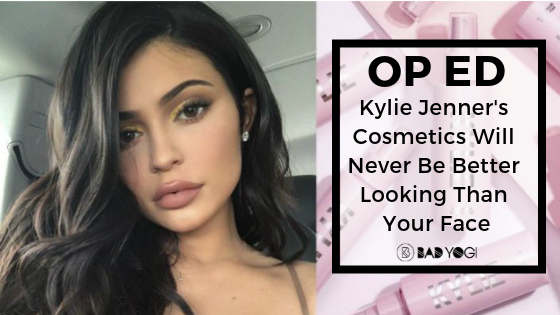 Op-Ed: Kylie Jenner’s Cosmetics Will Never Be Better Looking Than Your Face

There is no denying that the Kardashians are one of the most popular families on the planet and when Kylie Jenner started selling her own makeup, people were flocking to stores to get their hands on it. So far, Kylie’s cosmetics have been doing very well, receiving raving reviews and, according to Forbes, the cosmetics line is worth about $900 million. That’s not too shabby. I’ve never used any of it myself, so I honestly can’t say whether it’s really worth all the hype.

Earlier this week, Kylie announced a brand new addition to her cosmetics line – setting spray. This new addition comes in a small, pink bottle and news outlets wasted no time in spreading the word. That’s great. It’s great that people love Kylie’s cosmetic line. There’s one thing that bothers me though. When Yahoo Lifestyle reposted Seventeen Magazine’s article about the new setting spray, it added its own headline, reading: “Kylie Jenner is Launching Her First Setting Spray and the Bottle Alone is Prettier Than My Face”. Uhm, it is? I don’t have to physically hold one of those bottles in my hands to know that that is so not the case. Not for anyone. Yeah, yeah, I hear you – people say these things when they get really excited about stuff, they don’t really mean it that way. Or do they?

The things we say come from somewhere

When you claim that a setting spray bottle is prettier than your face just because it’s from Kylie Cosmetics, it’s coming from somewhere in your subconscious. Somewhere in the darkest crevices of your mind, you probably don’t only enviously admire her, but you also might secretly judge yourself for not (in your opinion) being as pretty as she is. The second you start to think or even just consider that something as materialistic as a setting spray bottle is prettier than your unique human face, we have a problem.

Young girls and women all around the world admire Kylie – they buy her makeup, they follow her on Instagram, they watch “Keeping Up with the Kardashians”, which, in my opinion, is not a very good show to watch, simply because it’s an unrealistic depiction of what real life actually is. These people are superstars. They have tons of money. They have luxuries some people don’t even know exist until they watch the show. Looking at everything they’ve got, it’s hard not to be a little jealous and start to compare your own life to theirs – which is ridiculous, because you’re not part of a super complicated, very rich family who has cameras recording their lives almost 24/7. And guess what, not all of it is even 100% real. Speaking of realness, Kylie will look just like any other normal person out there when she’s not wearing makeup, and that setting spray bottle is just colored plastic, which, by the way, is very bad for the ocean. Just saying.

When you take admiration too far, it could be damaging to your self-esteem

When keeping in mind that most people know Kylie from KUWTK, it makes sense that some might start to idolize her so much that they could get to a point where they think even the products she’s putting out are somehow prettier than they are. That’s just not good for anyone’s self-esteem. This headline is insinuating that Kylie is so much better than everyone else that even her products are prettier than the general population. This is hero worship at its worst. Admiration for a person is one thing, worshipping them in such a way that you put yourself down to do it, is another.

Now the question is – could people really get to a point where they worship someone so much that they don’t even realize how bad it is for their self-esteem in the long run? I’d say yes. Absolutely. The moment you put yourself down to lift up some famous person or brand, there’s a problem. We talk a lot about how women should be lifting each other up and working to empower one another. I think sometimes we don’t realize that we’re actually disempowering ourselves in simple ways such as these. Sure, I’m assuming it’s a woman who wrote the headline, but even if it was a guy, the situation doesn’t change. It was still a person who felt that it was justified to say that something materialistic is better looking than they are.

I honestly think that putting out headlines like these are doing more harm than good. Sure, a lot of people are probably going to click on that article, because let’s be honest, a lot of us would be wondering how awesome a setting spray bottle would have to look for it to be prettier than the human face. I was expecting more, to be honest. Way more. But some might buy into the idea – the headline puts the idea in people’s heads that something materialistic that was created by a very famous and successful human being is much better than the general population.

These kinds of articles are mostly aimed at younger readers and having young girls reading a headline like this, feeling like they’re not pretty enough or will never be as pretty as Kylie or her products, is quite disconcerting. Of course, none of this is Kylie’s fault. She didn’t write that headline, but I’m going to say it anyway – a little realness goes a long way every once in a while. I, for one, have never seen her without makeup. And I’m not talking the bare-faced no-makeup look she’s sporting in some pictures. I’m talking a bare, naked, no-makeup-in-sight face. Then again, I don’t watch KUWTK, so I might have missed it if it ever happened on there.

The thing is, I think media outlets have to be more considerate with what they put out there and how they put it out there, especially when you know most of your readers are going to consist of young girls and women. That headline could’ve gone a million different ways. The fact that it turned out the way it had just goes to show that we still have some issues to address regarding the perception of beauty and self-worth.

I’m not dissing Kylie or her cosmetics (people are going crazy about it for a reason), but I do think that she could perhaps do more to show young girls that there’s no such thing as perfection and that makeup is actually just there for you to have fun with – not to slap on layer by layer to cover up so-called imperfections. Perfection is an illusion, and trying to achieve it will drive you crazy. Thinking that a setting spray bottle is more perfect than your face is even crazier, but I pretty much already covered all of that.

Over to you: what are your thoughts on this? Is it a harmless headline? Am I going on about nothing at all, or should media outlets be more considerate with how they put things out there? Sound off in the comments!