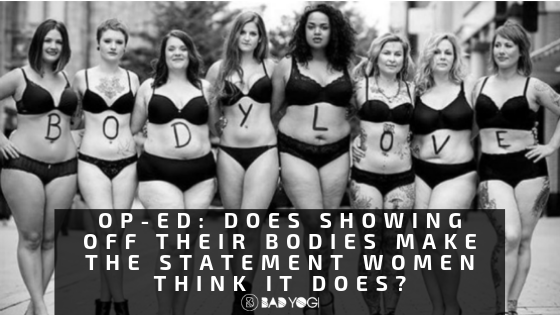 Op-Ed: Does Showing Off Their Bodies Make the Statement Women Think it Does?

Women are sick and tired of having to hide their bodies. They want to be able to do with their bodies as they please – whether that means walking around in leggings all day, or wearing a bikini on the beach even though they don’t have the “beach body” everyone expects them to have. Quite frankly, women seem to be done worrying about what everyone is expecting them to look like. They are showing off their bodies to make a statement: look, we’re here, we feel good, we are trying to love ourselves just the way we are and don’t want to be slaves to society’s standards anymore.

This year kicked off with a lot of controversy surrounding Cardi B‘s twerking in the music video for City Girls’ song Twerk. People were saying that she is hurting the #MeToo movement by expressing her sexuality so publicly. Then there was the woman who nearly got kicked off a plane for wearing a crop top. There was a food blogger who got awful criticism for eating out at a restaurant wearing what looked like a bralette. Last week 800 women ran the Vitality London 10k in their underwear to promote body positivity, and some people weren’t happy with that either. Guess what? It was all those negative comments and opinions that made these stories go viral.

Feedback means you made a statement

Perhaps the negative feedback women get for the way they choose to dress and show off their bodies is a good thing – it raises awareness of the issue and it spreads the word to other women around the world that your body can be your armor and your voice. When looking at all of the above some might pose the question of whether women showing some skin makes the statement they think it does. Well, when looking at all of the media attention women get every time they do, I’d say hell yes. You’re not making a statement if no one is talking about it, are you? 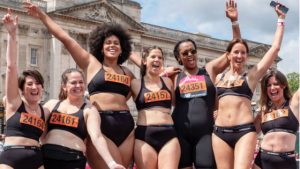 800 Women took part in the Vitality London 10k in their underwear and said that it made them feel empowered.
Image: Getty Images

Jessamyn Stanley loves to show her body to the world

When you google body positivity accounts to follow on Instagram, the name Jessamyn Stanley pops up a few times, especially when you’re searching in yoga circles. Don’t know who she is? Well, she’s anything but an ordinary yogi. She’s not skinny, she’s not pretentious, and she is not ashamed of calling herself fat. There are a number of interviews in which she talks about women showing off their bodies and the issue of body positivity and how it can so easily be misinterpreted. She’s a yoga teacher too and focuses on creating an environment where women of all shapes and sizes can feel welcome, because she didn’t have that privilege when she attended a yoga class for the first time.

Showing off your body just the way it is

When you visit Jessamyn’s Instagram page, you’ll see her showing skin like a supermodel, reveling in her body, loving it, embracing it, and showing it off for all the world to see. Of course, the comments aren’t all kind. Stanley told Health in April that she couldn’t even begin to list all of the negative comments she’s received about her body.

“They go from ‘You’re fat,’ ‘You’re ugly,’ ‘You’re disgusting,’ ‘You’re promoting obesity,’ ‘You’re a horrible person.’ Everything that you can think of to say, and more specifically to a fat person, has been said to me.”

All of these comments commonly appear on pictures of Stanley dressed in a bikini, her underwear, or her yoga leggings and crop top. In an interview with Wear Your Voice Magazine, she said that it’s ridiculous that people expect of bigger-bodied people to behave or dress in a different way from those who are skinny. She added that when skinnier people are feeling hot, they take off their clothes and practice yoga in their crop tops and shorts. Why can’t she do it as well?

The haters made her famous

Despite all the haters, Stanley has an amazing career and is an inspiration and voice for many people. You can probably thank the haters for that – without them, no one would’ve been talking about her and she’d probably not be as famous on social media as she is. She clearly made a statement with her underwear and bikini pictures, otherwise, no one would’ve taken any notice of her.

Is showing off your body making a statement?

Next question: why do women feel the need to show some (or a lot) of skin, regardless of their shape and size? I think the answer is pretty simple – they are looking for ways to empower themselves, and their choice of clothes is one of the ways to do so.

No one can tell a woman what to put on in the morning – that’s her choice. She gets to choose. In a world where women’s rights are still a constant struggle, they are taking hold of any opportunity they can get to empower themselves – and it’s not for nothing. People talk about it, they comment on these women’s Instagram posts, and whether what they say is positive or negative doesn’t really matter, because the goal has already been reached – people noticed and they either loved or hated the post enough to take the time and energy to comment on it. This is how things go viral, this is how statements are made.

My body, my statement

Using your body to feel empowered 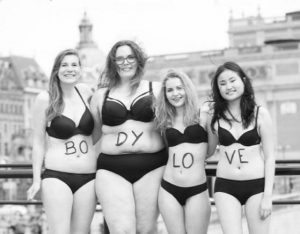 Showing off your body does make a statement, and if it makes you feel empowered, do it.
Image: Getty Images

Women feel empowered by the choice to show themselves just the way they are. No one should deny them that right – and the negative commentary is all cool. That means you made a statement. It means you made someone sit up and take notice. Keep making statements ladies. Keep empowering yourselves in any way you see fit. If that means finally slipping into that bikini you’ve been too scared to wear for fear of what others might say, do it – and then do it again and take pictures.