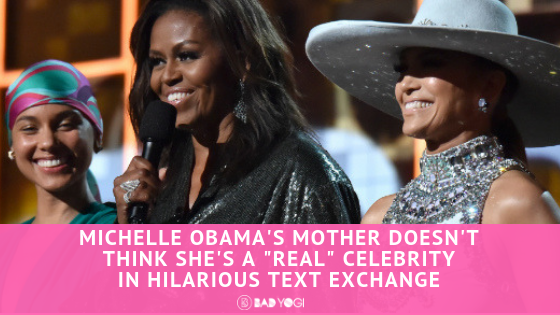 Michelle Obama is no ordinary person. Not only is she the former First Lady of America and married to former US President Barack Obama, but she has also recently released her inspiring memoir Becoming, and was named the US’s most-admired woman. She’s definitely a force to be reckoned with, not to mention a massive inspiration to many around the world. There’s only one thing she hasn’t yet been able to do – convince her mother that she’s famous. 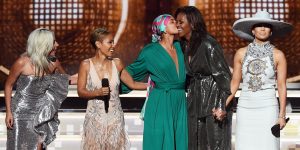 Michelle Obama made a surprise appearance at the Grammys and received a 25-second standing ovation from the entire arena.
Image: Kevin Winter / Getty Images

Your mom can either be the type of mother who will say anything to make you feel better and boost your confidence, or she can be the one who keeps you grounded when you find worldwide fame. Michelle’s mother is the latter.

Did you meet any of the “real” stars?

Today reported that the First Lady attended the 61st Annual Grammy Awards on Sunday as a special invitee and when she appeared on stage, she received a 25-second standing ovation from the entire arena. When she texted her 81-year-old mother, Marian Robinson, to tell her about it, she was unimpressed, asking “Did you meet any of the real stars or did you run right after you were done?”

Not the kind of reply one would expect, right? What more does one have to do to get your mother to say “Wow, you’re actually that famous?” But Michelle knows her mom all too well and found the entire situation quite funny, sharing the texts on Instagram with the caption “When your mom doesn’t think you’re a ‘real’ celebrity.”

When your mom doesn't think you're a "real" celebrity…Tonight in Phoenix, I shared this text thread from my mom from #Grammys night, and I just had to share it with all of you. #TextsFromMom 😂

Michelle is on her way to world domination

Despite her mother’s dismissal of her fame, Michelle Obama is indeed a “real” celebrity. Time reported that the nationwide tour for her book Becoming has sold out stadiums from New York to Los Angeles. She’s also been interviewed about her story by the likes of Oprah Winfrey, Reese Witherspoon, and Sarah Jessica Parker. She’s definitely been making the rounds in the “famous circles”. At the Grammys, she delivered a message about the power of music alongside Jennifer Lopez, Lady Gaga, Jada Pinkett Smith, and host Alicia Keys, so it’s safe to say that she had indeed met some of the stars, as her mother put it.

For me, a big part of friendship is showing up for your girls—whether that’s for a birthday, a quick catch-up after work, or a major milestone. So I was thrilled to be there for the one and only @aliciakeys at the #GRAMMYs. She is one of the most genuine, caring, and thoughtful people I know—there’s no one better to help us all celebrate the unifying power of music!

We’re pretty certain that Michelle’s mother is secretly very proud of her daughter. You can’t possibly have raised the first African-American First Lady, who in the end conquers the world and makes a difference, without secretly smiling to yourself about it every once in a while. We see that smile, Marian, we see it. 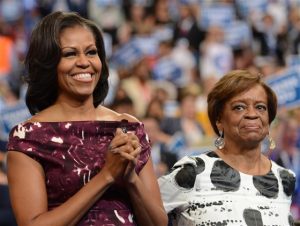