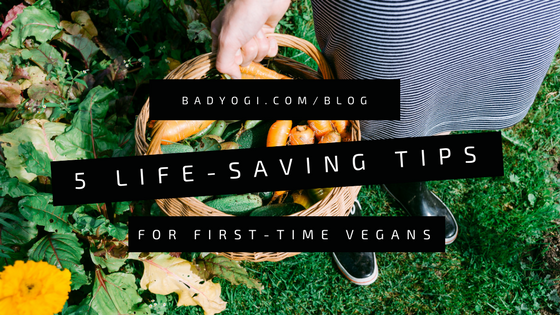 Whether you’re doing it for your health, the environment or just for the hell of it, going vegan for the first time can be daunting.

Trust me, I’ve been there.

Around the time I thought trying veganism for Lent was a good idea, I was also in the less hippy habit of eating Nutella straight from the jar and grating half a family-sized block of extra-mature cheddar onto my pasta every night.

I tell you this not to boast (but seriously, just you try making a wheel of edam last less time than me), but to reassure: if I can do it, the most dedicated meat lover can.

And do you know what? It’s not nearly as difficult as you might think.

Naturally, before I embarked upon my vegan adventure I did exactly what you’re doing now: scoured the internet for advice on how to do veganism ‘right’. I learned a lot along the way, too, so here just for you are my five life-saving tips for the first-time vegan.

1. Look at what you already eat

One reason going vegan seems so terrifying is the idea that it involves a complete overhaul of your diet. Ok, you’re going to need to make some changes, but if you take a closer look at your weekly food shop, I bet you’ll be surprised how much of your stock cupboard favourites can stick around.

For me, the realisation that baked beans and spaghetti hoops were both still on the menu was a revelation. Knowing that I could just microwave something up on a lazy day made the whole thing seem instantly more accessible.

Of course, there are some things that just aren’t going to make the cut. While I found dropping meat out of my diet fairly straightforward, there was a period of panic when I wondered how I would cope without my soul mate: Dairy.

Let’s all take a moment to be thankful that we decided to try veganism after a bunch of activists made it cool: the non-dairy options in mainstream supermarkets are INSANE. Soy is the obvious affordable choice, but one way to keep things exciting is to branch out. Hazelnut milk on oats with banana and maple syrup is a ridiculously luxurious way to start the day.

3. Make veg the centre of attention

Another trap it can be easy to fall into? Trying to replace each individual item on your plate with a vegan alternative. Somehow ‘Tofu and mash’ doesn’t have quite the same ring to it, and my boyfriend looked so aghast when I mentioned ‘lentil bolognese’ that I hadn’t the heart to continue down that road.

A much easier way to adapt? Plan meals where vegetables naturally take centre stage. Stuffed peppers are a great go-to dish here (you can microwave them for goodness sake!), but the meal that really changed everything for me was this sweet potato and chickpea buddha bowl. Trust me, once you’ve tried this, meat cravings will be replaced with an insatiable longing for cumin.

This is probably the most valuable thing you can do when you’re first starting out – either get a newbie buddy on board, or tap into the vegans in your life and their plant-based knowledge. Seriously, one pal even made me a shopping list!

Having someone go vegan at the same time makes you feel like you’re in it together, and their eyes won’t glaze over when you start your fourth rant in two days on how much you miss cheese. Which segues me nicely into…

5. Have a healthy scepticism of vegan cheese

I’m serious about this one, guys. Approach that stuff with CAUTION. While I was only vegan for a short time and have by no means tried every vegan cheese out there, from my experience you are infinitely better off forgoing the thing altogether, if only out of respect for the real deal.

When mainstream pizza chains are offering delicious dairy-free options, the prospect of drizzling some poor excuse for protein over an otherwise tasty pizza fills me with dismay. But worry not, the pain will pass, and the void can easily be replaced with peanut butter or sweet potato fries.

So there you have it: five tips to make the move to veganism that little bit less daunting.

Got a tip that I’ve missed? Add it in the comments below. Happy world-saving, everyone!