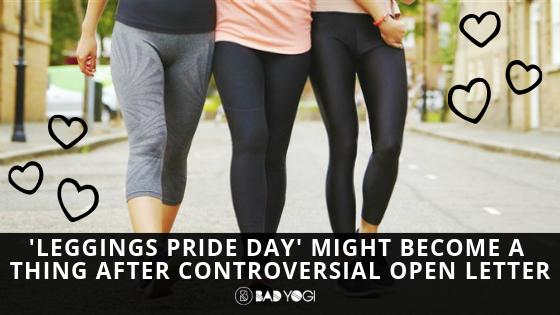 If you’re a yogi, chances are good that you love your leggings. You probably live in them [editors note: at least] half of the time. There’s no big secret behind why most women love to wear leggings – they’re super comfortable and when you dress them up with a nice shirt and a stunning pair of shoes, you can feel totally comfortable and still look super presentable. Unfortunately, as is the case with most things in life, not everyone agrees.

Earlier this week, Today reported that a woman, identified as Maryann White, wrote an open letter to the Notre Dame student paper to complain about women (especially young students) wearing leggings. Her main reason for the complaint was that, being the mother of a son, she felt that leggings are immodest and can attract unwanted male attention. She added that she’d seen some girls wear leggings and short tops to church and that she was ashamed for them because all the men behind them couldn’t help but see their behinds. “I didn’t want to see them, but they were unavoidable. How much more difficult for young guys to ignore them?” she said. Uhm, so when you’re wearing jeans (which White suggests women should rather do) men can’t see your behind? Really? Will super baggy tracksuit pants do the trick then? The second women start wearing that, they will probably be shamed for not looking presentable enough. What do people want from us?

There are mothers who want to protect their sons from women

White continued to urge women to stop wearing tight-fitting leggings for the sake of their own self-respect and safety. “I’m fretting both because of unsavory guys who are looking at you creepily and nice guys who are doing everything to avoid looking at you,” she wrote. “For the Catholic mothers who want to find a blanket to lovingly cover your nakedness and protect you – and to find scarves to tie over the eyes of their sons to protect them from you!”

Wait, hold up a second, mothers want to protect their sons from women simply because of the way they dress? If there’s one thing that’s non-negotiable it is that men are, in fact, not animals, which means that they have the intelligence to keep their sexual urges and desires under control.

This is not the first time the way women dress are being criticized because of the way men react to it. Why should you look in the mirror every morning wondering if you’re dressed “appropriate enough” to not have any guy looking at you? First of all, women will probably never understand how men think, which renders the aforementioned action useless and secondly, there’s probably not many guys who stand in front of the mirror in the morning wondering if they’re dressed appropriately enough so they won’t fall victim to the catcalling of women in public. So, how is it even fair? Yes, there’s definitely a sort of “dress code” for wherever you go and there are definitely limits but leggings? Are you kidding us?

How about mothers teach their sons to respect women?

White went on to say that leggings are “so naked” and “exposing”, adding that women should think of the mothers of sons next time they go shopping and rather wear jeans. Here’s a thought, why don’t mothers of sons teach them to respect women’s bodies from a young age? Look, when we see a guy with sexy legs in skinny jeans we’re going to steal a look, perhaps even tell our friends. Wed’ probably privately rant about the fact that way too many guys got the pretty long legs, but that’s where it ends. Most women won’t make a point of staring at the guy or even worse, result in sexually harassing him. So, there’s nothing wrong with a guy appreciating a woman’s beauty, or even stealing a look at her, as long as it’s done in a respectful way.

The letter got a lot of backlash on social media

In her letter, White added that even though women have every right to wear leggings, she would recommend they do not and look into other options. Of course, White’s letter sparked a lot of controversy online. It barely took a day before Irish 4 Reproductive Health, which is a non-profit organization run by students, organized a Leggings Pride Day in response to White’s letter. The group invited people of all genders to post pictures of themselves rocking their leggings on social media. Anne Jarrett, who was one of the organizers of the protest, told Today Style that they wanted to remind people that it’s totally okay to wear their leggings and dress their body in whatever way they see fit.

People jumped on social media to support the campaign, rocking their favorite pair of leggings and making their opinions heard on the matter.

a Catholic mom published an opinion in ND’s newspaper that leggings Lead Men Into Sin so we’re protesting our right to not be responsible for men and to not be constantly policed by morals or femininity #LeggingsDayND pic.twitter.com/bN7oTNheIc

Other parents also weighed in

From all the responses, it’s clear that women really love their leggings, and it’s not only the students. A female student’s mother, Heather Piccone, pushed back against White’s letter in the same newspaper, saying that if nakedness is wrong, White’s sons better have been fully clothed every time they’ve ever gone to visit the beach adding, “By her own definition and logic, any male out playing on a sunny day at the park with his friends should be ashamed of himself, and as a mother she should have properly raised her son not to tempt my daughter with his body.”

Conrad Palor, who is a sophomore at Notre Dame, made his opinion heard on the matter by also writing a letter to the newspaper. “While White’s comments were likely intended to be innocuous, they contribute to and further the narrative that women need to dress in order to not distract their male peers, which only furthers the sexualization and subsequent subjugation of women’s bodies,” he wrote.

Can we have a hell yes? Palor summed it all up pretty nicely and this is proof that men are in fact perfectly capable of respecting women and the way they choose to dress.

Leggings Pride Day has been receiving a lot of support

In the meantime, more than 1,200 people on Facebook have shown interest in the Leggings Pride Day and the hashtag #LeggingsDayND has been making its way around the Twitterverse.

Anne Jarrett is really happy with the response Leggings Pride Day have been receiving, saying that she really appreciated Piccone saying that it is a mother’s job to tell their sons not to do something and to respect women. She’s hoping that Leggings Pride Day will serve as a reminder to people everywhere that what you wear does in no way define your worth. She added that women should remind themselves that they are not just bodies, they are people and can be people regardless of what they choose to wear.

Women should be supporting each other

The saddest thing about this story is probably the fact that it was a woman who had these views. Of course, everyone is entitled to their opinion, but shouldn’t we be trying to lift each other up? Shouldn’t those of us who have sons teach them how to respect and love women? Isn’t that what’s most important?  At the end of the day, women need to have each other’s backs. The change has to start with us. We need to support each other.

If there’s one good thing that came out of all this it must be Leggings Pride Day. Our inner bad yogi is jumping for joy at the thought of actually turning that into an official thing. Even though for us, basically every day is Leggings Pride Day – but hey, let’s make it official already.

What are your thoughts on this? Are leggings way too “revealing” or are some people just looking for things that aren’t there? Sound off in the comments!