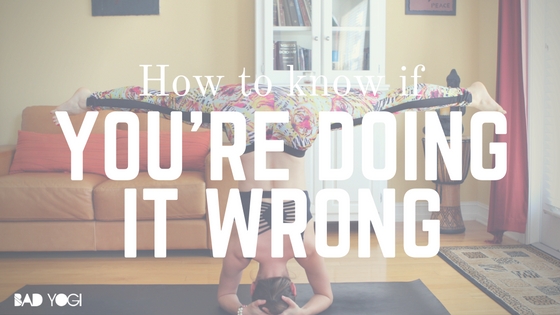 How to Know If You’re Doing it Wrong

If you’re struggling, you’re doing it right. Just hear me out.

Sometimes we get influenced by the illusion of ease. We see people who do yoga every single day or who workout all the time and think, “it’s easy for them because they LIKE doing this!” Nine times out of ten, this is false. Sure, they may ultimately like the results of yoga or working out or whatever it is they do, but mustering the sheer willpower to do it when they don’t want to has nothing to do with liking it.

I’ll use myself as an example. I’m a former Pro Quitter. I quit everything I started. I had no follow through whatsoever until I decided that I was tired of disappointing myself. I was tired of letting myself down and not sticking with habits that would ultimately get me to where I wanted to go. So I redefined myself as someone who was Disciplined. I totally scratched lazy and quitter off my list. I didn’t want to identify with those words anymore. To that end, I’ve been doing yoga and working out regularly— without fail— whether I “feel” like it or not. The inspiration to do it isn’t always there (often it isn’t). But through muscling through the “not feeling like it” and doing it anyway, I’ve learned that the quote from Picasso is true: “inspiration exists, but only when it finds you working.”

Inspiration has to be earned. It doesn’t just show up randomly all the time. So you’ll notice that if you really really REALLY don’t feel like doing yoga but you get on your mat anyway, after a few minutes you start to find your groove and you’re so glad you did it, right? Same goes with anything that requires any sort of commitment! We have to get over the hump of, “I don’t feel like doing this right now” to bask in the presence of inspiration.

Literally this morning the LAST thing I wanted to do was clean my house, but I’m so glad I did because now I feel like I can be in a clear space and have a productive week. See? This works with everything 😉

Progress is what makes us happy and fulfilled. And progress requires discipline.

So decide to be one of those people that others can look at and say, “Wow, it must be so easy for him/her.” And then YOU can be the one to think to yourself, “Oh you have no idea…” as you nod along and smile 😉 Over to you! Have you ever felt like you were “doing it wrong” if you were struggling?