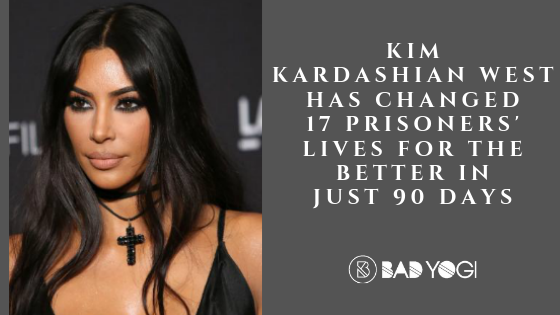 Kim Kardashian West has been a really busy woman – not only has she recently announced that she’s busy studying to become a lawyer, but she is also putting into action her pledge to fight for prison reform. Last year, CNN reported that Kardashian West was working with the White House to help lessen the sentence of first-time non-violent drug offenders. Despite many advising Kardashian West against working with President Trump, she decided that freeing people from prison who didn’t really belong there was more important.

“(Kim) has provided financial support to cover legal fees so that we can travel the country. Our relationships with our clients don’t end when they are freed. (Kim) is truly dedicated to the issue. I work personally with her, we are really grateful.”

Legal fees are not the only thing Kardashian West has been covering – she’s also been helping people who were imprisoned far away from home to get back to their families. According to Barnett, these are little things people don’t always think about when a prisoner is released, but Kim is, and she’s taking care of it all.

The 17 inmates that have been released isn’t Kardashian West’s first success story – it all started last year after she had a talk with President Trump about Alice Marie Johnson. Johnson was a first-time non-violent drug offender who had already served 21 years of her life sentence. Flash forward a week later, Trump commuted her sentence and she was released. This must definitely have motivated Kardashian West to take on more cases like these, and now 17 more people have their lives back thanks to her good work.

Even though all eyes in the world are constantly fixed on Kardashian West – she is, after all, a massive reality television star – she hasn’t really tweeted about her success stories. Clearly, she doesn’t feel the need to brag and is leaving her actions to do the talking. Barnett said that Kardashian West has mainly not been tweeting about all the recent success stories because she’s so busy making them all happen:

“(Kim) has been on the phone as we’ve told clients they are coming home. I think one, she really wants to be taken seriously, so she is really focused on learning the system and the people who are directly impacted. That takes a lot of focus, too. It’s not always amplified with social media.”

Kardashian West faced some doubt from many people after her announcement last month that she’s studying to become a lawyer, but both Barnett and Cody believe that she’s going to get that qualification and will be a dedicated lawyer. According to the two of them, Kardashian West is very interested in the field and eager to learn. Well, last time we checked that’s all you need to reach your goals.

Kim Kardashian West might be one of the biggest reality TV stars on the planet, but she’s proof that you don’t have to let the world define you. Many people thought that she wouldn’t be able to pull off being a TV star and studying to become a lawyer. Guess she’s about to prove them all wrong in a few years. Sure, it definitely can’t be easy, but all of us can draw some inspiration from her endless ambition.