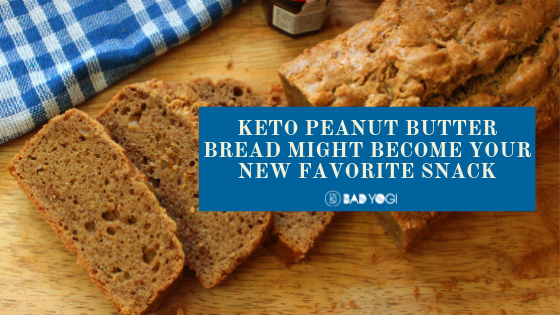 It seems like the keto diet is absolutely everywhere these days. Even though it’s gotten some serious backlash from people like personal trainer Jillian Michaels, people don’t seem ready to give up on it just yet – in fact, it seems that the craze is only growing. The lastest? Keto-friendly peanut butter bread.

For those who absolutely love peanut butter, this latest development is really good news. Even though it was originally created for those following the keto diet, anyone can enjoy this, and according to those who tried it, it tastes really good and is ridiculously easy to make.

According to Today, the peanut butter bread recipe went viral after food blog Headbanger’s Kitchen posted it on their website. It soon took the internet by storm. The reason behind this might very well be because it’s bread made from peanut butter, but the fact that it’s fast and easy to make definitely contributes to its popularity. In today’s extremely busy life, we rarely have time to bake bread at home, but this awesome bread only takes ten minutes to prep. The fact that it’s easy enough for a 4-year-old to make doesn’t hurt either. It consists of only five ingredients, and you’re bound to have them in your pantry.

It won’t cost you a fortune

Many other keto breads use almond flour and pricey, hard-to-find ingredients like psyllium husk. Ain’t nobody got time for that. The peanut butter bread asks the minimum: eggs, vinegar, baking soda, stevia powder, a pinch of salt, and, of course, peanut butter. You whisk all these ingredients together until you have a cake-like batter. Then you let it bake for 25 minutes at 350 degrees and voilà! Peanut butter bread is served. 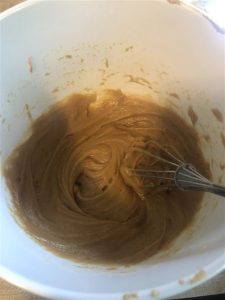 The keto peanut butter bread’s batter is more liquid than dough and mixes easily with a whisk.
Image courtesy of Erica Chayes Wida

For those wondering whether it tastes any good, reviews all seem to agree that it does. According to Today, the taste will remind you of a peanut butter cookie. Another perk is that the bread is moister than your typical loaf – and you don’t need to use any specific type of peanut butter. According to Headbanger’s Kitchen, they’ve tried all types of peanut butter in the recipe, and all of them worked. They’ve tested peanut butters like Teddie, which consists of only peanuts and salt, as well as freshly ground peanut butter bought at local stores, and none of them caused any flops. 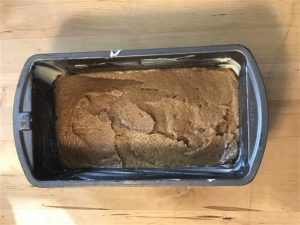 This is what the batter should look like right before you put it in the oven.
Image courtesy of Erica Chayes Wida

If you’re not a fan of the keto diet, you’re probably wondering if this bread is actually healthy. After all, the keto diet requires a high fat and low carb intake. Keri Glassman, who is a licensed nutritionist and the founder of Nutritious Life, says that in order to create a true state of ketosis, most people on the diet need to eat less than 40 grams of carbs per day, but it could also be as low as 20 grams. The peanut butter bread was created to provide you with 30 grams of carbs.

Should you cut your bread into 20 slices, each would have 86 calories and 2 grams of carbs. If you cut it into 10 slices, you’ll be left with 4 grams per slice, which will work well for those who are on the keto diet, as long as they control their carb intake during the rest of the day.

While a slice of wholegrain bread is probably healthier for those not following the keto diet, the peanut butter bread should work great as a treat or breakfast bread, since it’ll keep you full for longer. It’s recommended that you eat it with a thin coating of hazelnut spread, some chia seeds, and sliced bananas. Sounds like the perfect treat for a Saturday morning.

Have you tried this bread? Any comments or recommendations? Drop them in the comments!