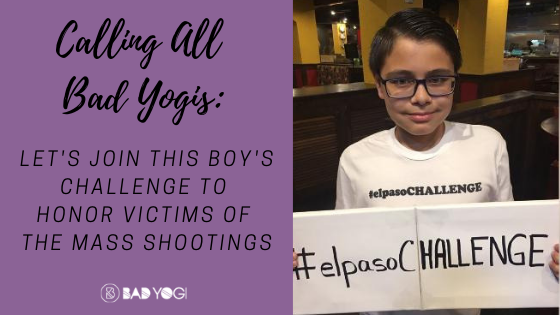 Calling All Bad Yogis: Let’s Join This Boy’s Challenge to Honor Victims of the Mass Shootings

After the devastating mass shootings this past weekend, Americans are trying to pick up the pieces – and it’s no easy task. An 11-year-old boy from El Paso, Texas, where one of the two shooting incidents took place, decided that he was going to do something to help people deal with what happened – and it’s brilliant.

Finding ways to cope with what happened

We all need something or someone to put a smile on our faces right now, and sixth-grader Ruben Martinez is trying to do just that. After telling his mom, Rose Gandarilla, that he didn’t want to go shopping at stores anymore and that they should try to find a delivery service instead, his mother realized that he was having some trouble dealing with the events of the past weekend. “I explained to him that we could not live in fear and that people in our community are caring and loving. I told him to try and think of something he could do to make El Paso a little better,” Gandarilla told CNN.

Ruben took his mom’s advice and used the rest of his Sunday to think of a way he could make things a bit better for his community. He came up with something that will definitely put a smile on everyone’s faces. It’s called the #ElPasoChallenge, and it challenges everyone in El Paso to do 22 acts of kindness – one for each person who died in the shooting at Walmart on Saturday. 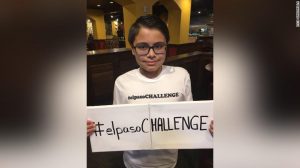 Ruben Martinez came up with a brilliant idea to spread love after the weekend’s devastating mass shootings.
Image: CNN

Ruben even made a list of suggested acts of kindness, like holding the door open for everyone that crosses your path, mowing someone’s lawn, visiting a nursing home, leaving a dollar in the vending machine for the next person, taking some flowers to someone in the hospital,or even writing someone a letter telling them how amazing they are. The aim is to be kind to everyone around you – every day. 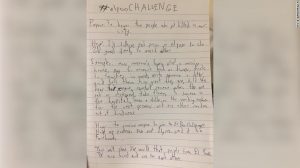 Ruben and his mom are spreading the message of the challenge, and Ruben even includes some suggestions for acts of kindness.
Image: CNN

Gandarilla says that Ruben went ahead and did his first act of kindness on Monday, delivering dinner to their first responders. After Ruben kicked off the campaign, he and his mom went to multiple places to spread the message, like Walgreens, Barnes & Noble, and Sprouts. They passed out flyers and is also promoting the challenge on Facebook.

Healing yourself and others

The world most certainly will be a better place because of him. In times as trying as these, the best we can do is be kind. Being kind is the only thing that matters when everything else goes to hell. It will help you to heal, and it will help those around you to heal.

We’re challenging you to do this too

So, go ahead. We here at Bad Yogi challenge you to take on Ruben’s challenge: Write down 31 acts of kindness (that’s the current number of victims from both shootings), throw them in a bowl and pick one for every day. Then go ahead and implement those small acts of kindness in your day. Let’s spread love and hope. It’s a resource that never runs out. As Martin Luther King, Jr. so famously said, “Hate cannot drive out hate, only love can do that.”

Help another Bad Yogi out – what suggestions do you have for acts of kindness? Drop them in the comments below and let’s get started on spreading some love and positivity wherever we are.