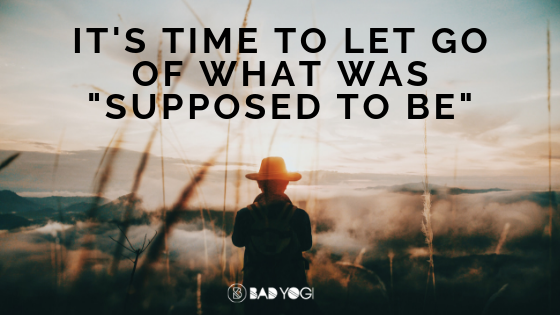 On Friday morning I was in the middle of a particularly deep stretching yoga routine when an email popped up on my Ipad telling me my driving lesson was cancelled for the fourth time (yes, I’m taking driving lessons for the first time at age 27, better late than never!) Irritated, frustrated, and in a rage I called them up and cancelled all my driving lessons and set up a trial lesson with another school. My plan for a tranquil, productive day was lost but it got me to thinking.

We do everything we can to plan our lives down to every minute detail and there are myriad ways to do it. Grocery lists, Pinterest, bullet journals, day planners, notepads, post its. All designed to make sure what is “supposed to happen,” happens.

Weekly goals, monthly goals, yearly goals, and five year plans are all there to grant us that content sense of control in life while continuing on with that deep down knowledge that something or someone else is really calling the shots.

When things are going well and that thing which we want so desperately is granted to us we don’t question it. We tell ourselves it was meant to be and bask in the glow of a universe that seemingly has our back.

However, when we encounter the harsh, sorrowful, somber part of being human we curse the universe, the world and everyone in it. We tell ourselves it wasn’t “supposed to be” like this. We decide that job was supposed to be ours, that relationship was supposed to be the one, that person wasn’t supposed to die. Sometimes we even beg the universe or try to make a deal like it’s a criminal in a dark alleyway.

But the thing is, we can’t control fate. What was meant to be, what was supposed to be or whatever you want to call it. All we can do is let go, and allow. You see, what is “supposed to be” isn’t our decision. You can make your lists, your plans, your goals, and future prospects. But the final decision is not ours, it’s not in our hands. To be human is to be okay with that, whether you like it or not.

I told my husband on our first date that plans never work out. I was in the midst of traveling throughout Europe and was drugged by a haze of trains, Eastern Europe, and new experiences. I didn’t realize it at the time but I had finally come to that point in my life where I put my trust and faith in the universe to teach me what I’m supposed to learn, where I need to go, and what I need to do. It was the beginning of a life long relationship with that which I can’t see but feel every second of the day.

God, Universe, intuition, whatever one chooses to call it is guiding you. You can walk through this life with a blindfold on and whatever happens, good or bad, you’ll still end up where you’re supposed to be.