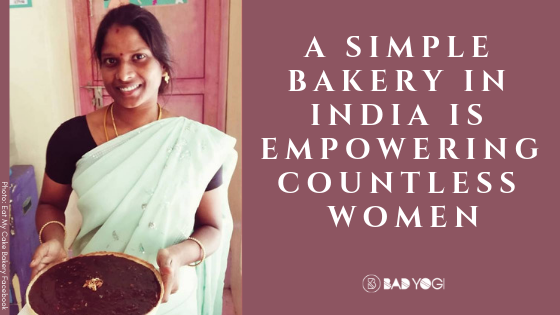 Every year on March 8, people around the world take a moment to celebrate International Women’s Day. This year’s theme is #BalanceforBetter and the initiative is aimed at gender equality and a greater awareness of discrimination. It also focuses on celebrating the achievements of women all over the world.

Empowering the women who need it most

When we take a moment to look at how far women have come, we’re filled with pride, but we also see that we still have a long way to go. Luckily, there are women out there who are making it their life’s mission to empower other women and those are our favorite kind of stories. On this International Women’s Day, let’s take a moment to appreciate the work of French Graphic designer Saloua Sahl, who is making it her full-time job to empower the women who need it most. What she did and continues to do highlights perfectly what this year’s theme is all about. 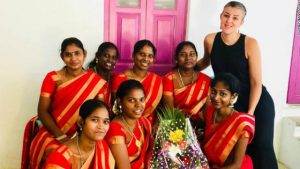 Saloua Sahl (pictured far right) with the women who work at “Eat My Cake”.
Image courtesy of Eat My Cake

Sahl’s journey to help lift other women up started four years ago when she was on a mission to find ways to give back to others. CNN reports that her goal took her to a special-needs school in Pondicherry, India. Working among the women there, she saw that some of them are stuck in a life of poverty and male chauvinism. This inspired her to create an educational program to help these women rise above their circumstances. The idea took on the form of a bakery, called “Eat My Cake”, which is currently providing various women in the area with useful skills and an income.

Taking a leap of faith

Despite what you might think, opening the bakery was as much of a learning experience to Sahl as it was to the women who started to work there. Sahl admits that she isn’t a formally trained pastry chef and that she had to learn along with all the women working at the bakery. She knew it wouldn’t be too hard though, because most of them grew up cooking, so learning how to bake pastries wouldn’t be a tough transition. Sahl was determined to give these women the necessary tools to make something of their lives and break the mentality that women don’t need to be educated. 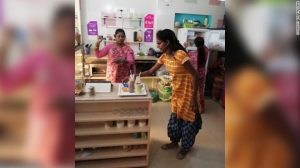 Women hard at work in the kitchen of the “Eat My Cake” bakery.
Image courtesy of Eat My Cake

The start of a solution

Sahl used some of her personal finances to start the bakery, but also received donations from a crowdfunding platform for female-focused projects and the Women’s World Wide Web. Garnering enough funds, the bakery opened its doors in December 2016. Since then, Sahl has helped many women to defy the odds and rise above their circumstances. What drives her to keep the initiative going is the fact that it is the start of a solution.

Sahl can still recall the day one woman didn’t show up at the bakery for work and later told her that her husband had smashed a coconut on her head. This is what keeps Sahl going – she wants to make a change so these things will no longer happen. She says that women who have an income and can send their kids to school start to feel like they are worth more and that is where the solution starts. Sahl adds that every woman who works at the bakery has a key and that they are super proud to be a part of their city again.

Women who have never worked before now has a job

Many of the women who work at the bakery have never been employed before. Among them is Janaki, a widowed mother whose husband did not want her to work, but she went ahead and did it anyway to take care of her two daughters. Her biggest dream for her girls is to be able to chase their own dreams. She loves working at the bakery, saying that she is excited to return to work every day because of her strong female co-workers. 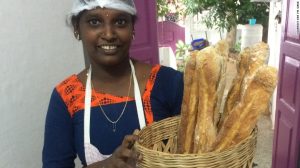 Janaki has been working at “Eat My Cake” for two years and also delivers bread to local restaurants in the area.
Image courtesy of Eat My Cake

Teach a (wo)man to fish and feed her for life

The bakery provides its female employees with the opportunity to learn many new skills. It is divided into two groups – the factory team and the sales team. The factory team is responsible for the baking, while the sales team takes care of the storefront. This creates a platform for women to learn different skills and find out what they are good at. Those who work with the customers and manage the money are offered basic math and English classes. Sahl says that it is all about finding each woman’s unique skills and pushing them to work on it.

Sahl firmly believes that when women are given the opportunity to grow, their community and families will be positively affected. This proved to be true when one woman’s husband stopped drinking after he saw how hard she was working at the bakery. That same man also went on to witness the death of two of the bakery’s women’s husbands due to alcohol abuse. He is now sober. Sahl says that the bakery hires him to paint every now and then.

Eat My Cake is doing pretty well so far and Sahl is planning on expanding the menu and opening another store in a larger city nearby called Bangalore. Her dreams don’t stop there – she also wants to send one of the employees of the bakery to France to receive formal training after which they can share their newfound knowledge with the rest of the team. 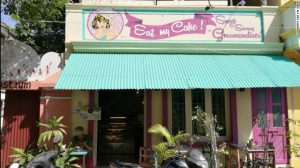 Eat My Cake bakery is located near the tourist district in Pondicherry, India.
Image courtesy of Eat My Cake

This is what #BalanceforBetter is

Sahl is truly making a big and lasting change. Women who have never worked a day in their life now not only have a job, but also have the opportunity to learn new skills and pass them on to others. They are changing the narrative in their community, they are proof that gender barriers can be overcome no matter where you live. They are refusing to be discriminated against just because they are female and they are achieving more than they ever thought possible. This initiative perfectly embodies #BalanceforBetter and yes, if they can do it, everyone can do it. Here’s to beating the odds and to women supporting and lifting up other women. If we don’t do it, who will?