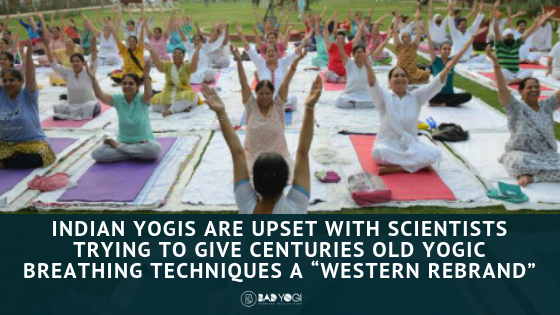 Since its development in ancient India over 5,000 years ago, yoga has grown into a global phenomenon. You find studios almost everywhere and even your local gym might be offering some classes. A recent article published by Scientific American sparked some criticism, with native Indians saying that the West is rebranding century old yogic breathing techniques. 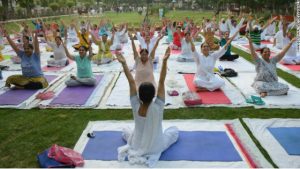 Some of us might take the Indian yogis at their word – they’re literally living in “yoga territory” if one might call it that. Nevertheless, the allegations are worth investigating.

What’s all the fuss about?

If you’ve ever been to any sort of yoga class, you are familiar with pranayama, which is Sanskrit for “breath control”. The technique basically consists of breathing in for a set amount of seconds and then breathing out for the same amount. The Scientific American referenced this technique and then proceeded to explain that German psychiatrist Johannes Heinrich Schultz developed “autogenic training”, which they described as a technique that focuses on slow and deep breathing, adding that this is still the best-known breathing technique the Westen culture uses for relaxation until this day.

The abovementioned statement might be what had upset some of the critics. It could be understood that the American Scientific is claiming that Schultz’s method is something entirely new, whilst it is very similar to and mostly seem based on pranayama. But what really caused an uproar was a tweet the site posted containing a picture of a man appearing to be practicing Nadi Shodhana, which is more commonly known as alternate nostril breathing. The caption read “Cardiac coherence breathing exercises can stabilize the heartbeat and have a powerful ability to dampen anxiety.”

Cardiac coherence breathing exercises can stabilize the heartbeat and have a powerful ability to dampen anxiety. https://t.co/jHA8djKOsB pic.twitter.com/Ve7hM0myoW

The picture, along with the caption, made it seem as if the site was rebranding the ancient practice of pranayama as cardiac coherence breathing exercises, thus reclaiming the ancient Indian technique as a new, modern Western one.

Yogis spoke out on social media

The tweet led to many Twitter users voicing their opinions regarding the matter, with user Renuka Govind saying, “Next thing we know, it will be patented and sold back to us terming it as a superior way of living.”

Another case of Turmeric Latte. Pranayama of Yoga called as “Cardiac Coherence Breathing”. Next thing we know, it will be patented and sold back to us terming it as superior way of living. Just saying it existed in ancient cultures is not enough. https://t.co/d7K2DKj6kK

She wasn’t the only one who felt this way. Opposition politician and author Sashi Tharoor, promptly said that the article was simply dressing up the benefits of a 2,500-year-old Indian technique in the scientific language of the 21st-century.

Detailed description of the benefits of the 2500-year-old Indian technique of pranayama, dressed up in 21st c. scientific language as “cardiac coherence breathing”! It’s taking the West a few millennia to learn what our ancients taught us millennia ago, but hey, you’re welcome… https://t.co/LLltRZ3pP5

Another user was less critical and simply encouraged scientists to stick to the ancient techniques’ original names.

Wonderful to see that the West is recognising the benefits of the ancient indian techniques of Pranayama – Nadi Shodhan, Anuloma Viloma among others! Let’s stick to their original names not Cardiac Coherence Breathing Exercises! https://t.co/uVhJMStjgA

The article mainly focused on how making use of controlled breathing exercises can help to promote relaxation and relieve anxiety, focusing on what they called cardiac coherence. It went on to explain how a typical cardiac coherence exercise works – inhaling for five seconds and then exhaling for five. That sounds a lot like pranayama, doesn’t it?

The author references yoga multiple times when explaining techniques like cardiac coherence, and while the name might be different, the technique doesn’t seem to be much different from its yogic origin, so why rebrand it all? There is nothing wrong with doing scientific research on how these unique techniques work, but as all the Indian yogis said – there’s no need to give these techniques another name and rebrand them as something entirely new.

Recognizing the benefits of yoga and backing them with scientific proof might just encourage more people to try it out, but if you’re a yogi you already know that you don’t need any proof – yoga does work wonders and for most of us, our personal experience is all the proof we need.

What do you think? Is all the fuss about nothing or are scientists trying to “rebrand” some of yoga’s ancient techniques?