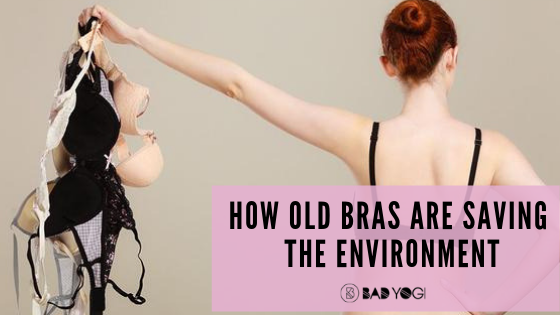 How Old Bras Are Saving the Environment

Ladies, if you’ve been wondering what to do with your old bras, we’ve got you covered. You can now make extra space in your closet without the guilt and donate those old bras to a good cause. As it turns out, there are injured turtles out there that can do with a couple of bra clasps. Who knew?

Bra clasps can help to save turtles

Today reports that animal and wildlife rescue groups have found a new innovative way to help treat injured turtles with damaged shells, and they need your bra clasps to do it.

Last week, the Wildthunder Wildlife & Animal Rehabilitation & Sanctuary in Iowa took to Facebook to ask people to donate their bra clasps and the post has gone viral since, with many people promising to send their old bras along.

Tracy Belle, who is the founder of the organization, says that she was completely amazed at how popular the post had become. The Carolina Waterfowl Rescue, which is a North-Carolina-based volunteer group, also shared the post, which then went on to garner over 11,000 shares on Facebook. Keenen Freitas, who is one of the staff rehabilitators at the Carolina Waterfowl Rescue, says that the bras have been “pouring in” and that they’ve been getting an insane response from people in as little as two days.

How do they use it?

It’s great to see that so many people are eager to help the environment and its beautiful creatures. Many were surprised to discover that a bra clasp can be used for treating turtles’ wounds, but according to Bette Zirkelbach, who is the manager of the Turtle Hospital in Marathon, Florida, it’s actually not as uncommon a medical tool as some might think.

“What we do with them is when you have a wound that you can’t close or a shell that has a fracture that you need to stabilize, you adhere them to the shell, one on each side of the fracture, and then hook that hook and it helps stabilize the fracture and give it time to heal.” 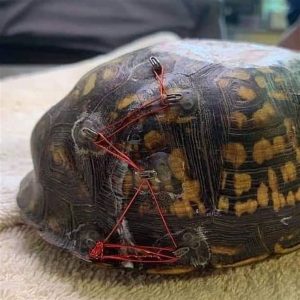 Who knew bra clasps could be so cool?
Image: Carolina Waterfowl Rescue

Bra clasps are amazing tools to treat turtles who have suffered from severe injuries, especially in cases where their shells are so damaged that the tissue underneath can be seen. According to Freitas, the method to treat these damaged shells with the bra clasps are simple – they weave wire through the eyelets, and as the shell starts to heal, they tighten it. He adds that the bra clasps are the most effective tool they’ve used so far. Zirkelbach agrees, saying that there aren’t many specialized tools available to treat injured turtles, so they had to get creative. We think the bra clasp idea is fantastic. Instead of having to throw it away with the rest of your old bras, it can now be used for an amazing cause. 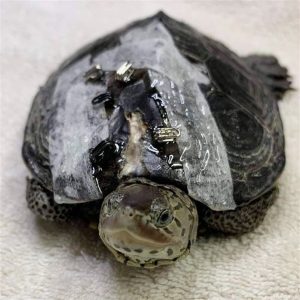 Bra clasps are the ideal tool to use when turtles have severely injured shells.
Image: Carolina Waterfowl Rescue

People are eager to help

Since the Facebook post has gotten so much attention, Carolina Waterfowl Rescue went ahead and shared a wishlist on Amazon of other supplies they need to treat injured animals, and the response to that has been amazing as well, with a care package from California arriving shortly after with many of the requested items. Freitas says that it’s overwhelming to see how much the community is willing to help them out.

What should I do if I ever find an injured turtle?

Belle, Freitas, and Zirkelbach also took the opportunity to share some helpful advice with people for when they find an injured turtle. They say that first of all, you need to call a licensed rehabilitation center or an expert. Should you find an injured turtle in the water, you need to radio the Coast Guard for help. Something very important people need to do when they find a turtle is to write down the exact place they found it. Turtles spend their lives in one place, and once they’re all healed up, they need to be returned to the place they call home.

It’s amazing to see people working together to save the environment and its creatures. Now that it’s as easy as donating your old bras, we can all hopefully help to make a difference and create awareness. So, go clean out that overflowing underwear drawer you’ve been dreading to sort out for ages – it’s for a good cause and then you’ll have loads of new space for some new additions.