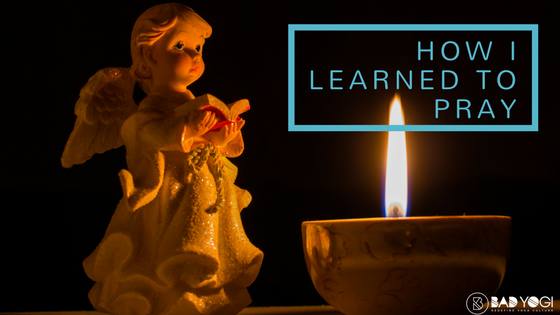 How I Learned to Pray

I was raised a Christian. And even though I practiced that religion to some extent, something always felt a bit odd.

Believing in some God in the clouds wasn’t working for me.

Because I always felt that the higher power was inside of myself.

And throughout the years, I felt that this couldn’t work, everything was such a mess.

Years pass, and I got to my YTT. On the second day, one of my wonderful teachers is talking about the history and theory behind yoga.

And there it was. My jaw dropped.

Finally, what I had thought all this time, was making sense to me.

I learned to dedicate my yoga practice to that higher power. To dedicate my work to the universe and to the happiness of all people. To believe that I was being helped through this wonderful life and thank for all the great opportunites and challenges I got.

And by dedicating my own time to the universe, both my own practice and the yoga classes I taught, I learned that it was alright to ask for something else in return.

That it was alright to ask for help.

To ask for assistance.

To ask for what I needed, there and then.

And that, is how I learned how to pray.

Not the rehearsed prayers I had learned as a child, but to pray from my heart.

To thank for all that I had gotten, and to ask for guidance and strength to take on the next challenge.

And by finally feeling that the world made sense, I could connect better to my own religion.

I will believe in the power of the universe.

I will believe in myself.

And I will believe in the power of love.

How has your spiritual practice developed from what you learned as a child? If you want to share, let’s talk in the comments!