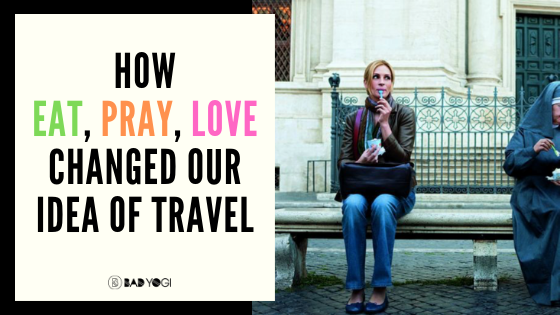 How Eat, Pray, Love Changed Our Idea Of Travel

In 2006, Elizabeth Gilbert’s memoir Eat, Pray, Love was published and in 2010 the movie adaptation came out, starring Julia Roberts. The film and Gilbert’s story became a worldwide phenomena and suddenly women were leaving behind their lives to re-trace her footsteps. Almost a decade later, the idea still lives on.

For those of you who have been living under a rock (or in modern times, away from the internet,) Eat, Pray, Love is based on Elizabeth Gilbert’s travels through Italy, India, and Indonesia after her divorce.

Her adventures struck a chord with women all over the world, myself included. The idea that you can leave your life behind (especially when it’s in pieces) and jet off to foreign countries to stuff your face, meditate, spend time with your own thoughts and get to know yourself again is completely appealing.

The trip wasn’t about wanderlust or seeing new places, it was a way for Gilbert to get away from her life at home and explore who she really is, alone. In Eat, Pray, Love she writes, “It wasn’t so much that I wanted to thoroughly explore the countries themselves. This has been done. It was more that I wanted to thoroughly explore one aspect of myself set against the backdrop of each country, in a place that has traditionally done that one thing very well. I wanted to explore the art of pleasure in Italy, the art of devotion in India and, in Indonesia, the art of balancing the two.”

What is interesting to note is Gilbert’s use of the word “backdrop.” Her adventures don’t have as much to do with the places themselves, but with the idea that she can somehow forget her troubles and find herself while traveling or being on the adventure of a lifetime. It’s the ultimate appeal; to escape, to leave behind one’s mundane life where everyday looks exactly the same.

In her book, Gilbert is married (and wanting a divorce,) feeling like her and her husband are only accumulating things while he wants a baby, yet she is on a completely different page. It’s not surprising that her story resonated with so many women who are married with children and feeling like they could use a break.

After the movie came out, women were so desperate to re-create Gilbert’s stories that they went to the exact same places. Ketut Liyer, the healer Gilbert went to see in Bali, is extremely busy these days.

A Time article states, “On a still road in Penestanan Village in Bali’s central foothills, a dull, blue-stained signboard points toward the house of the medicine man. Ketut Liyer is a ninth generation healer of undecided age — ‘maybe 90?’ he shrugs — who has never been off the Indonesian island. But the dozen or so women who crowd his compound this afternoon, their chatter in competition with the peeping of caged birds suspended from clay-roofed pavilions, have come from all over. One by one they approach the small, weathered Balinese seer with the brilliant, near-toothless smile, and have him interpret their palms, their legs, sometimes even their spines. Today, the ladies all are ‘very lucky.’ They will each live to be one hundred and ten. In fact, most days visitors to Ketut can expect the same reading, with minor variations, but few mind. ”

Apparently there are packages available at various resorts in Bali where one can get the full Eat, Pray, Love experience (at least the yoga and meditation part.) And, Ketut Liyer now charges 25$ for a palm reading.

Clearly, Eat, Pray, Love has given a whole lot of women the idea that traveling can somehow “fix” you and they think Gilbert has given them the exact formula.

In her memoir, she writes, “If you are brave enough to leave behind everything familiar and comforting (which can be anything from your house to your bitter old resentments) and set out on a truth-seeking journey (either externally or internally), and if you are truly willing to regard everything that happens to you on that journey as a clue, and if you accept everyone you meet along the way as a teacher, and if you are prepared – most of all to face (and forgive) some very difficult realities about yourself, then truth will not be withheld from you. Or so I’ve come to believe.”

The concept of re-building oneself through travel became so trendy it spawned other similar memoirs like Cheryl Strayed’s “Wild.” Traveling, adventures, and the idea of “wanderlust” is perpetuated on Instagram as complete perfection. We’ve perfected the idea of travel, as if it’s the cure-all for every problem in life and that it’s this fantasy that will all end in happily ever after.

Traveling has a huge amount of benefits; it gets you out of your comfort zone, introduces you to new people, food, places, and cultures. However, traveling seems to have taken on a persona in our generation. It’s the perfect looking girl standing on a mountain top, her hair blowing in the breeze, smiling, looking like the happiest person in the world. It’s the group of friends laughing, sitting in the back of an old VW van on a beach at sunset. It’s no wonder we think of traveling as something that will fix our lives and make our problems go away.

But, don’t forget that traveling to another country is not the only thing that will give you insights into who you are and what you want. Make travel and adventures just one aspect of figuring things out, not the cure.