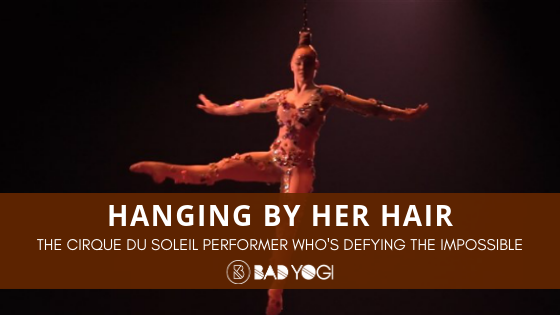 Hanging by Your Hair: The Cirque du Soleil Performer Who’s Defying the Impossible

Anyone who’s ever done aerial yoga will know how amazingly liberating it is. You kind of feel like an acrobat in the circus without the commitment. There is, however, a Cirque du Soleil performer who is very committed to her job. Suspension artist Danila Bim has taken the art of suspension even further – she hangs by her hair.

We can already hear your reaction to that and we’re saying it with you – ouch! According to Bim, it was indeed no easy job to get to the point where she could become airborne using only her hair. Today reports that she was looking for a way to diversify her work as an aerialist, and her search led her to become interested in hair suspension.

Proving that the impossible is possible

When you think about it at first, it seems practically impossible that someone would be able to bear all their weight on their scalp, but Bim was determined to make it work. She trained tirelessly for four months to strengthen her scalp and she managed it – when the six-month mark rolled around, she finally managed to go airborne.

It seems like a very crazy endeavor and Bim admits that it’s a painful learning process, but so is every other discipline in the circus, so it was the last thing that was going to put her off.

“There’s a pain of adapting to every discipline we learn. For me, it was when I could lift myself off of the floor. It was magical to fly and not be holding (on to) anything and being able to dance with my own weight. That was the best feeling.”

Bim is giving a nod to women with her performances

For Bim, the act of using her hair to hold her up in the air is very special because it’s a nod to all women out there. She wanted to make a show about women and there’s nothing more personal to them than their hair. We think it’s pretty badass. It goes to show once again that women are strong (and can endure a lot of pain).

So how the heck does she manage to hang by her hair?

You’re probably wondering how the heck Bim still has all her hair. Strong scalp aside, we’re all pretty cautious when it comes to taking care of our hair and breakage is not something anyone wants. So how does she manage to use her hair as a suspension tool while still maintaining her lovely locks? It’s actually quite simple. Bim knows as well as anyone that one strand of hair on its own is pretty weak, so she makes sure all of her hair is together and tied up in a tight bun. She spends 25 minutes prepping her hair for a show, tying it into a set of knots that allows it to sustain her body weight. 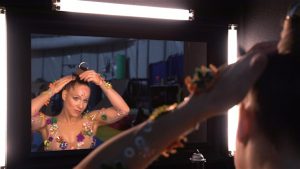 Bim ties her hair in a series of knots before tying it all up into a bun to make sure it can carry her weight during performances.
Image: Today

You have to be mentally strong too

Bim’s performance isn’t all in the hair though, she also has to be fit and flexible, but she stresses that that’s not the most important thing in her line of work – your mental level is the key to everything, it’s what makes or breaks your performance.

“Because we have to do shows sad, happy or (sometimes) sick. We deal with so many people, with their expectations. And if you’re not in your right mind, even if your body is, you won’t be able to do so.”

Does she have a few tips for maintaining a strong sense of mental health? Absolutely, and it’s not hard to do at all, it just takes some self-discipline. Bim says that you need to be mindful of what you eat, take care of your body, and get enough sleep.

Love what you do, do what you love

Bim is currently touring with Volta in San Diego, California. She performs six days a week, but doesn’t mind the tight schedule at all, saying that the hard work is totally worth it.

“When [the audience] applaud and they show me that they really liked the act, I feel like, ‘OK, you did your job today. You may go home.’ They liked it. They are with you. They’re clapping. They are here.” 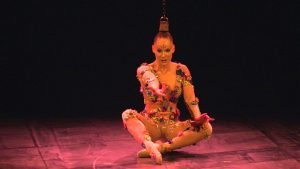 Bim is a stellar example of what one can achieve if you have the willpower. We’re not saying that you have to hang by your hair, but it’s cool to know that sometimes what we think might be impossible is, in fact, very possible once we set our minds to it.