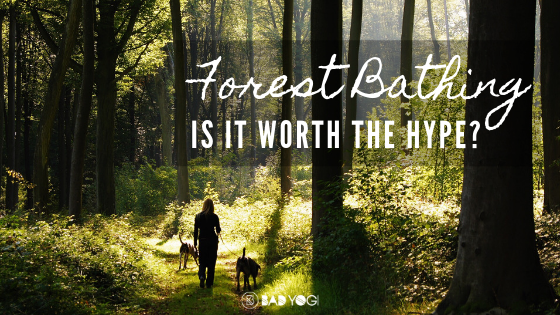 Forest Bathing: Is it Worth the Hype?

We’re nearing the end of August, and that means that the end of the year is almost upon us. As we all know, this time of year brings with it tons of new stress and concerns. You might as well gear up for it by spending the last few days of summer wisely. May we suggest a forest bath?

Yeah, it’s as cool and relaxing as it sounds. Perhaps you’ve heard the term before, but for those who haven’t, rest assured that we’re not suggesting you go take an actual bath in the forest. It’s more of a bathing of the senses.

Many people will tell you that spending some extra time in nature will help you to be less stressed, but you’ve probably often wondered whether that’s actually true. Well, now we have some science backing it up. A recent study that was published in Scientific Reports has found that spending at least two hours a week in good old nature can have wonderful effects. You don’t even have to do it all at once – you can spend short amounts of time outdoors every day, as long as it all adds up to about two hours. 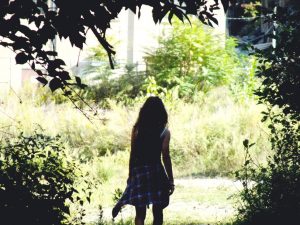 This study seems pretty legit. Its findings are based on data gathered from almost 20,000 people in England – and let’s be honest, if the people of England can find some time to spend outdoors with their usually gloomy weather, so can you. The study found that those who spent two hours of their time in nature per week had consistently higher levels of mental and physical health as opposed to those who didn’t. The reason? Being outdoors usually means you’re engaging in some sort of physical activity, even if it consists of a stroll. But according to Today, the experts say that there’s more to this than meets the eye: When people take their exercise outdoors, the natural environment could be much more beneficial to their psychological health than say, the gym. But why is that?

It has mental and physical benefits

According to Amos Clifford, founder and director of the Association of Nature and Forest Therapy Guides and Programs, it’s because humans evolved out of the forests, and a part of us will always be tied to it. And, of course, being outside usually means that we’re not bound to technology the way we are when we stay indoors all day. Clifford says, “We see a reset of the nervous system, where people start coming back to a healthier baseline. They’re away from their devices, they’re not in traffic, they’re not watching the 24-hour news cycle… they’re very much in the present moment.” That sounds divine, doesn’t it? No wonder it’s a cure for feelings of stress. Clifford adds that spending time in nature also helps to increase our bodies’ capacity to heal itself.

This might sound crazy, but science actually backs it up. According to David Strayer, professor of psychology at the University of Utah,  spending time in nature changes the way our brains work. This results in reduced stress levels and gives your wellbeing a boost. He also cites the lack of technology as the main reason this works. “It’s a contrast between our modern, plugged-in, frenetic, on-the-go, connected-to-social-media, sleeping-with-your-phone-under-your-pillow modern world,” Strayer says. We can’t disagree.

Where does it come from and what does it entail?

As with all good things, this isn’t a new practice. It’s actually inspired by Shinrin-Yoku, which translates to “forest bathing”, and its origin dates back all the way to the 1980s in Japan.

So, what does forest therapy or forest bathing entail? Well, basically everything you already think it does – walking through the woods, focusing on staying in the present moment, which, let’s be honest, is much easier to do when you can focus on the sound of the wind rustling through the trees and birds chirping from above. It also focuses on using your senses to connect with nature – smell the ground, the flowers, hear the sounds of all the creatures living and going about their daily lives all around you. 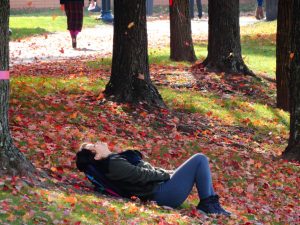 Obviously, no phones are allowed when you go on your forest therapy expedition. And as explained before, this is exactly the reason why this works so well. Clifford says that he’s seen how the effects of forest bathing helped people to become more relaxed and happier. With less stress dominating their minds and bodies, they start to look at life differently. He adds that some even reported finding relief for their chronic pain and insomnia.

Think of it as “resetting” your brain

Strayer backs up these findings, saying that enjoying nature helps us to rest the prefrontal cortex of our brains, which usually becomes fatigued because we constantly demand it to think and solve problems. Once we start to rest this part of our brain, the part that is associated with being mindful and meditative starts to become more active. If you’re out and about taking a walk or going for a jog, you’re getting even more benefits because, as we all know, exercise improves your mood, memory, and even your cognitive function.  Strayer says, “If you can manage to get yourself to a park, place to walk, jog, just enjoy, be in nature and leave the phone behind for 30 minutes, you start to see benefits.” Well, that sounds dandy. How long will it take to see results? Strayer says that you can expect to feel the difference after just three days.

You can do this alone or in a group

If you’re intrigued by the idea of forest therapy, we suggest you try it out – and you don’t have to do it on your own. There are forest therapy groups that take a walk that lasts up to three hours and is accompanied by a guide. This is a really slow walk, so you don’t have to be fit to be able to join in. The guides typically take groups on a route of half a mile or less, and the trails are easy to navigate. 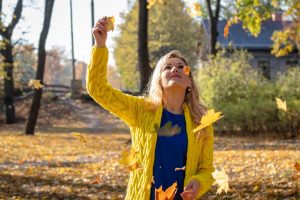 Think of this as a guided moving meditation in nature. The guide will ask you to focus on specific sounds, like that of birds singing, the wind blowing, or a water stream bubbling nearby. You will also be invited to feel certain things – like the heat, or the cool air, or the dirt in your hands. Clifford says that this really helps people to become more present. “[It] helps people get progressively more connected to their senses and to their bodies and to the place they’re in, and to really just slow down and relax. What are you drawn to? What about this is enjoyable?” From what we can gather, all of it.

Ready to try it?

If you’re ready to treat yourself to a forest bath sometime, it’s recommended that you start off with a guide, just to get the hang of the practice. The guided group walks usually cost about $30 per person. It might not be super cheap, but we bet it’s worth spending on yourself and your mental and physical well-being.

Spending some time in nature and just soaking up all the loveliness around you is bound to make you feel like a brand new person. We’re already feeling relaxed just thinking about it. This is definitely one of the trends out there that is worth trying.

Over to you: Have you tried a forest bath before? Would you recommend it? Tell us in the comments.