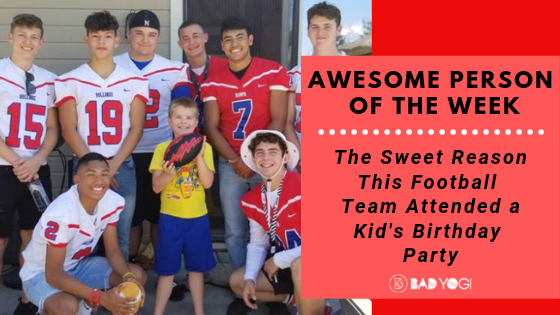 Awesome Person of the Week: The Sweet Reason This Football Team Attended a Kid’s Birthday Party

There’s only one thing Christian Larsen wanted – to have a birthday party for his ninth birthday to which he could invite all of his friends. It seems simple enough, but there was one hurdle – Larsen has autism, and therefore doesn’t have as many friends as his peers. His mother, Lindsay, knew this, but sent out invitations anyway. Only one person RSVP’d.

Lindsay was, of course, disappointed, but she had been expecting it. According to CNN, she attended one of Christian’s end-of-year school picnics and saw first hand how differently his classmates treated him. Some would completely ignore him while others would decline his invitations to come and play with him. While she could understand why kids would not want to be friends with Christian, she was still determined to let her son have the birthday party of his dreams. So she took to Facebook to share the story.

Working together to create something amazing

Blythe Ben-David, a good friend of Lindsay’s, saw the post, and immediately got to work to make sure that Christian would have the birthday party he deserved. She couldn’t be there since she lives in South Texas, which is pretty far from Meridian, Idaho, where the Larsens live, but she made sure to do what she could to make sure that Christian’s ninth birthday party would be an unforgettable one. She got in touch with Dan Holtry, a family friend and the football coach at Nampa High School in Idaho. According to Ben-David, Holtry is one of the kindest and most big-hearted people she knows, and she just knew that he would be able to help out. Holtry, of course, immediately agreed to help, and so an amazing birthday party idea was born.

Going above and beyond

Being a football coach, Holtry had an entire team at his disposal, and when he asked his players whether they would be up to attending Christian’s birthday party, all of them immediately said yes. In an email to CNN, Holtry praised his team’s efforts, saying, “The players jumped at the opportunity. They were ready and willing to celebrate with Christian. Within seconds of a sent text, they were 100 percent in. No hesitation whatsoever,” he wrote.

Making sure every moment was precious

When June 4 finally rolled around, it was time for Christian’s birthday party – and he had no idea that it would be the best one yet. A few of his classmates showed up as well as some children from the neighborhood, along with friends and family. Christian, of course, didn’t know of the surprise guests that were on their way.

When Holtry and his team showed up, they chanted Christian’s name. Christian was very excited by the arrival of the new guests and soon he was playing some games with them. His mother said that the second Holtry and his players arrived, the energy just became incredible. “The energy became electric and it was amazing to see how they all came together. Christian often plays alone, or wanders off, but with the players there helping organize games, he became part of the action. He was playing alongside his peers, as well as the football players. I think it helped the other young children interact with Christian too.”

Holtry and his team stayed until the very end, singing happy birthday to Christian, playing with the kids at the party, and watching as Christian opened his presents. According to his mother, Christian felt very blessed and amazed at how it all turned out. “He talked about it for days. One of the best things about his personality is that he is always looking for the positive. He didn’t question why the players were there, he just loved it. He has said multiple times that it was the best birthday ever!” 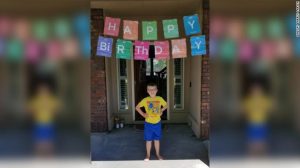 Christain said that it had been the best birthday party ever.
Image courtesy of Lindsay Larsen

This is probably one of the sweetest and most inspiring stories we’ve heard. All these people came together and went out of their way to make a boy’s ninth birthday party an unforgettable experience. For an entire football team to offer up their time to attend a 9-year-old’s birthday party is quite something. It’s sad that Christian had so few friends to begin with – clearly kids need to be better educated on what autism is and how you don’t treat these people any different. Christian, like any 9-year-old, just wants to have fun with his pals.

People need to be more informed about autism

Kudos to Christian’s mother, her friend Ben-David, and Holtry and his team. They gave Christian memories that will last a lifetime, along with the reminder that he’s good enough and worthy enough – even when the rest of the world tries to tell him otherwise.