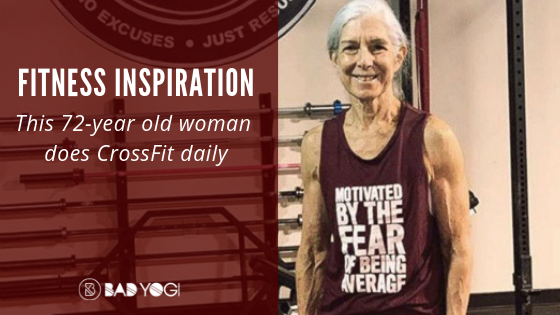 If we were to make a list of things we as humans are very good at, making creative excuses for why we can’t work out must be near the top. We know working out is good for us, both physically and mentally, but sometimes we just need a tad of inspiration to get us going again. Luckily for all of us, there’s a woman called Lauren Bruzzone – she’s slaying her fitness goals, but her story is anything but ordinary.

72 and stronger than ever

For starters, Bruzzone is not what is considered your typical Insta-worthy fitness inspiration – she’s much better. According to Yahoo News, she’s 72 years old and does CrossFit at the gym near her home in Stamford, Connecticut. Bruzzone, who used to be an attorney and adjunct college professor, makes her way to the gym almost every day at no later than 6:00 a.m. to do her daily CrossFit regimen.

Bruzzone made exercise a priority throughout her life

Bruzzone has been active all her life. She was committed to taking dance or step aerobic classes two days a week and practiced yoga regularly, which means that she’s pretty flexible too. She only jumped on the CrossFit wagon five years ago when a friend introduced her to the exercise and encouraged her to try it. Bruzzone told Good Morning America that she would never have thought she’d be doing CrossFit 15 years ago, saying that her friend really had to talk her into trying it. She decided to try it out – if she didn’t like it, she could always stop doing it.

Others are inspired by her commitment to exercise at her age

Five years later, she is an inspiration to everyone at her gym and the rest of the world is starting to take notice too. Mike Corozza, the owner of Carozza Fitness where Bruzzone trains on a daily basis, is one of her biggest fans, saying that she is his fitness inspiration. “She doesn’t give any excuses and she never has. ‘Okay, coach, I’ll try. I’ll do my best.’ Those are the words you usually hear from her,” he says.

The most unusual thing about Bruzzone must be her age – it’s not every day you see someone in their 70’s hitting the gym, let alone do a vigorous CrossFit workout. Corozza says that Bruzzone’s strength is due to her consistency when it comes to exercise and because she doesn’t hesitate to focus on her weaknesses. That’s a life lesson for all of us right there.

CrossFit is just the next adventure

Bruzzone says when she first started her CrossFit journey it was “a little bit more intense” than what she was used to, but that she enjoyed the exercise regardless. Anyone who has seen someone else do CrossFit or have tried it for themselves will know that Bruzzone’s definition of “a little bit more intense” is debatable. CrossFit is intense as hell, so it’s no wonder that videos of 72-year-old Bruzzone doing atomic sit-ups with a weight, flipping tires, lifting weights, and doing burpees over a bar (how does she even do that?) went viral on the internet.

This mornings @crossfit workout: 50 Shoulder to overhead *every min on the minute 5 burpee over bar #noexcusesjustresults #mastersdoitbetter #betterthanyesterday #NEVERGIVEUP

How she stays motivated

Bruzzone says that seeing younger people do heavier weights keeps her motivated. Even though she’s well aware of the fact that she’s no longer 20, she still wants to keep pushing herself to do a little bit better every time. She also says that consistency is key to keeping her on track to crushing her fitness goals. “Every once in a while I take a day off, but I try to be there because when you’re older your body kind of forgets. It’s just easier to be there,” she says.

Her advice to those struggling to commit to their own fitness journey is to never give up. She also encourages people to pace themselves with exercise, adding that she’s happy to take things slow at the gym. “At my age, you don’t want to break anything. It takes too long to fix,” she says. Perhaps that’s something all of us can keep in mind, no matter what our age. Sometimes our ego tends to take over while we’re working out and exercise should be there to celebrate your body, not push it past its limits.

Making exercise a habit will definitely reap benefits, but being mindful is even more important because that means the chances are good that you’ll still be able to hit the gym at 72 too. If you’re still making excuses for why you can’t commit, you know they’re bogus by now. Just jump in, take it slow and keep it consistent. If Bruzzone can do it, so can you, and we’ll forgive you if you skip the burpees. We all know they hate us just as much as we hate them.