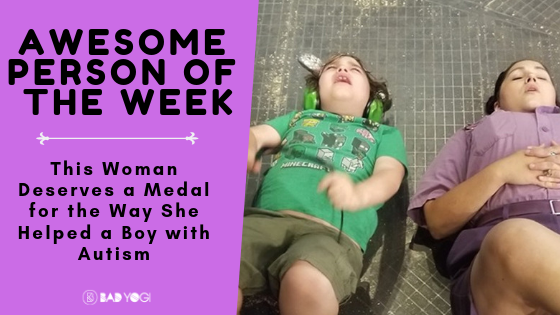 Awesome Person of the Week: This Woman Deserves a Medal for the Way She Helped a Boy with Autism

Any kid would be upset if they’ve been looking forward to visiting a theme park only to find out that the machinery is malfunctioning and they have to turn around and go home. One can only begin to imagine how a kid with autism would react to the abovementioned scenario – and it did indeed happen, but luckily, there was an amazing employee ready to save the day.

Today reports that 9-year-old Ralph Koppelman couldn’t wait to ride The Amazing Adventures of Spider-Man at Universal’s Islands of Adventure theme park in Orlando, Florida. He was as excited as any other kid there, but right before he finally got the chance to get on the rides, he and his family got the disappointing news that the attraction had to be closed due to malfunctions. Ralph, who has autism, was completely devastated when he heard the news.

His parents knew what would come next when everyone was asked to exit the premises. Ralph fell to the ground and started to cry uncontrollably, after which he started to hyperventilate up to the point where he found it hard to breathe. His mother, Lenore, was frantically trying to get him up from the floor so he wouldn’t get trampled on. It was at this moment that one of the ride attendants, Jen Whelchel, came over to them and went to lie down on the floor next to Ralph.

Whelchel spoke to Ralph in a calm and soothing manner while allowing him to cry his heart out. She also helped him to get his breath back under control. Not once did she lose her cool as he screamed and sobbed – she just told him to let it all out while telling the people surrounding them to keep walking and give him space. Welchel then told Ralph that his feelings were completely valid and that it was okay for him to be sad, she understood his feelings, because she would’ve felt the same way. She also told him that he could lie there with her on the floor for as long as he needed to until he felt better. His mother says that that was exactly what Ralph had needed to hear. Within 10 minutes, he had stopped crying and was his old self again.

Sharing the experience with the world

Lenore shared the experience on Facebook, praising Whelchel’s quick thinking and empathy. The post soon went viral with more than 40,000 shares. Lenore told Today Parents that it was amazing how Whelchel managed to calm Ralph down. “She was like a special education teacher. She knew exactly what to do. There is a huge difference between autism awareness and autism acceptance and Jen understands that.”

Sharing the experience on Facebook was probably one of the best things Lenore could’ve done – it has raised a lot of awareness, and many parents who have children with autism reached out to her. Some of them admitted that they are still too scared to take their kids out to crowded places because they’re afraid of how they’ll react. One person wrote, “I am still part of the ‘too scared to take them out in crowded places’ group. I have 2 sons 10 and 5 that are [autistic] also and they are the center of my world. Every time I read another Mom’s positive story it gives me a little more courage. Thank you.” Another person said that it was the best story they had heard in a while.

Lenore admitted that she wasn’t sure whether she should share the story on Facebook at first, but that she’s very glad that she did. She hopes that it will encourage other parks and business to provide their employees with the necessary knowledge to handle situations like Ralph’s. This will help to make the world a more inclusive place for people with autism. 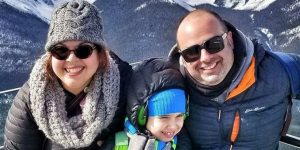 Ralph with his parents.
Image courtesy of Lenore Koppelman

This brings up an important point: Most of us know about autism, but few of us know how to handle people who are having an autistic breakdown. They can’t help it, and when they experience it, they need someone to help them. Having companies train their employees to handle these kinds of situations could really have a positive effect on people with autism as well as those who look after them. Knowing that you are surrounded by employees who know how to handle a situation like Ralph’s could bring a lot of comfort to people.  It might even encourage parents who are still too scared to take their kids out into public places to do so in the future with peace in their hearts.

We can all do our part by educating ourselves about autism

What Whelchel did was amazing – Ralph and his parents were lucky to have her around at the right time and it’s amazing to see that the story has gone viral. Creating awareness about autism is more important than ever. These people deserve to be a part of society as much as anyone else, and we can all do our part to help, whether that’s sharing stories like these or doing some research on autism and how to properly treat and help people with the condition.