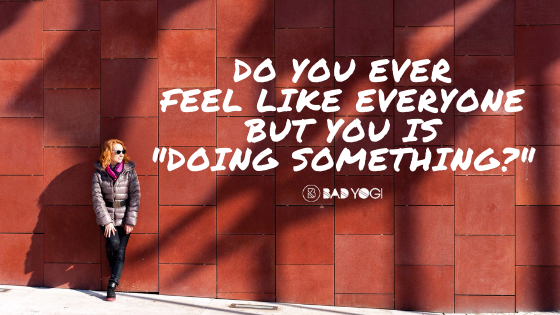 Do You Ever Feel Like Everyone But You Is “Doing Something?”

A customer lazily makes their way up to my till, basket in hand, most likely filled with various items they don’t really need or have any use for. “Hello!” I say, in my most cheerful voice. It’s well practiced after using it thousands of times throughout my usual weekend shift and I’ve become a professional at using it for even the most disrespectful and rude types.

My greeting gets no reply as a scowling woman toting 2 equally mean-faced offspring throws various two Euro t-shirts on the counter, along with paper thin ballet flats, unicorn slippers, and a Donald Duck onesie. I ring up her items in a robotic trance as I try to avoid looking at the clock in the upper right hand corner of my computer screen. I avoid eye contact with the woman across from me as well. Looking customers in the eye always makes me feel small, unworthy, and scrutinized.

This is my existence for 13 hours every weekend, and while this isn’t a lot, it can feel like an eternity at times. My place of work is like a casino; there are no windows or natural light and the concept of time doesn’t exist as hours become mere minutes.

During the week, I take on my real persona; that of a writer. No minimum wage per hour, no ugly, blue uniform, nobody looking down on me as if I can’t possibly be intelligent if I work in customer service; I’m myself Monday through Friday.

But, weekends in this job are hard on my psyche. I have an irrational fear that I’ll be working there for the next 40 years, still performing tasks a monkey could do in its sleep. It’s a job most of my co-workers take on temporarily while they’re at university, which means people come and go pretty frequently. I’m dying to be one of those who “moves on” into the great unknown, leaving behind my name tag and taking my dignity with me.

I feel embarrassed when I go to parties or dinners with my husband’s friends who ask me how my customer service work is going rather than asking about my writing career, as if what I’m working towards isn’t my real job.

Feeling like you’re behind everyone else your age is something almost all of us worry about, and can leave you in a panic, or just downright resentful at times. Who hasn’t felt an unnatural hatred for an ultra-rich and successful twenty-two year old? It’s not just the idea that other people are more successful, but it’s the fear of being left behind.

It’s common to feel like everyone else around you is “doing something” while you’re binge watching Downton Abbey for the eighth time. Because, really, who is posting pictures of their failures on Instagram? Who is going to admit to the fact that they stayed in their sweatpants all day while eating a box of Trix cereal and watching dog videos on Youtube?

Feeling inadequate and behind everyone else is one of the most universal human experiences. Everyone else around you is getting promoted, buying a house, getting married, making babies, and traveling the world; at least that is your perception.

I’ve come to realize that my perception of the world is based only on how I feel. Feeling like you don’t measure up and worrying that other people see you as a failure is based entirely on one’s own insecurities.

We are all on different paths in life; trying to walk someone else’s will only lead you in the wrong direction.