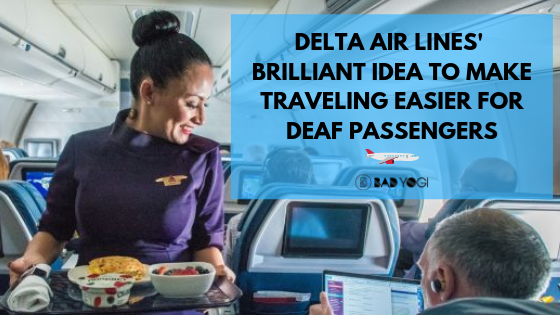 If you’re looking for an airline that’s committed to making traveling easier for all its customers, Delta Air Lines is probably the one. They are going to implement a uniform change, but not the sort you might think.

Today reports that starting this fall, Delta’s flight attendants will have a uniform label that will identify whether they know sign language. How cool is that? The label will also specify which sign languages the attendants know, from American English to any of the other 300 languages across the world. This means that most people who travel via the airline will be able to communicate with the staff, even if they are deaf or hard of hearing. This is indeed a great leap forward. 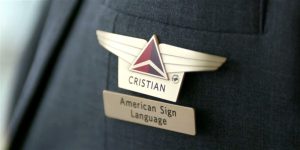 New labels will help people who are deaf to identify personnel who are able to help them.
Image: Delta

This isn’t an entirely new development. Delta has had personnel available to assist the deaf or hard of hearing for a while now. This personnel is present during boarding, deplaning, and flight connections. The new label that will be added to uniforms will simply serve as a tool to make these personnel more visible to those who need them.

Trying to be more inclusive

Ed Bastian, Delta’s CEO, announced this new addition in a video on his LinkedIn page, saying, “It’s a small step on our journey, but a powerful change as we seek to make the world a smaller, more inclusive place.” We couldn’t agree more.

In a press release, the airline said that it implemented the change based on feedback it had received directly from its customers, as well as those from Delta’s Advisory Board on Disability and the ABLE Disability Business Resource Group for employees. Airline spokeswoman Olivia Mayes said that the new implementation is “all a part of our plan to help make the travel journey easier for our customers.”

Delta is known for its great customer service

Delta had already made waves on social media before thanks to their unique customer service. In July this year, one of its attendants wrote an introduction and safety instructions for a sixteen-year-old passenger who was deaf and traveling entirely by herself. She took a picture of the note the flight attendant had given her, and her mother later took to Twitter to share it, praising the airline and its flight attendants.

My daughter who is Deaf took a flight by herself ! The attendant handed her this note on the plane ! Delta makes it amazing! @Delta pic.twitter.com/KQGVBq9uVC

Delta seems like one of those airlines that geniunely wants to help its customers have the best possible experience. Passengers with disabilities are even provided with a list of travel tips. The airline also has its own app, called Fly Delta. This shows customers all the airports where they can take advantage of visual paying systems or hearing loops.

Look out for the new labels this fall

The new labels will start to appear on Delta’s flight attendants’ uniforms this fall. Not only can we all agree that it’s a great addition, but it’s also making Delta the first American airline that offers this option. They’re the coolest right now, for sure.

Sometimes we forget how important it is to make sure that people with disabilities can navigate the world around them, especially when it comes to traveling. It’s a stressful thing for many people, and even more so for those who know that they’ll face extra challenges because of their disability. Delta is setting a stellar example and we hope that other airlines will soon follow suit.