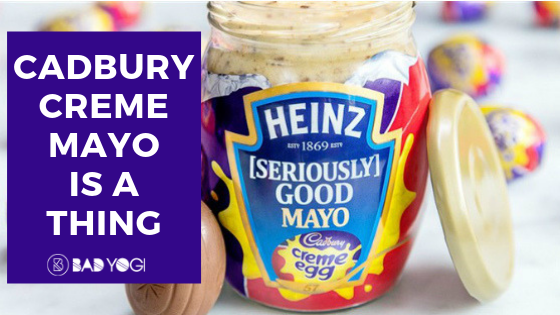 We all love our mayo. It goes with a lot of things – if something is too dry, add mayo. Need to add that savory taste? Hand me the mayo. Mayo is awesome, there’s no denying that, but the world was more than a little bit shocked when Cadbury announced that it’s collaborating with Heinz to create Cadbury Creme Egg-flavored mayo.

You can have your mayo and chocolate and eat it

Le gasp. What are they doing? Mayo is great, and chocolate too. But together? We have to admit, we doubt whether this could actually taste good and most importantly, what the heck do you eat it with? The mayo comes just in time for Easter, but we’re not quite sure how you’re supposed to be enjoying it. Are you supposed to add it to your food as usual and see how it tastes? Or should you take a trusty spoon and eat it plain while watching Netflix like you do Nutella? We honestly don’t know.

We weren’t kidding, Heinz Creme Egg Mayo is a thing! Who wants to try it?🙌 OF COURSE YOU DO! Come and see us at Ely’s Yard, Truman Brewery in London from 11th-13th April for free samples of this crazy combo. Only until stocks last! pic.twitter.com/3ZVehv0LJb

According to Today, Americans need not get too upset about the latest development – the Cadbury Creme Mayo is currently only available in the UK. This collaboration comes shortly after Cadbury changed its iconic Easter bunny to an English Bulldog. Clearly, they’re ready to try some new things and take some risks. The new mayo combo is dubbed as “[Seriously] Good Mayo” on the label and we’re honestly wondering whether it’s as seriously good as they say. For now, we’ll have to rely on the opinion of UK citizens since we can’t taste it for ourselves.

After Heinz announced the new mayo, Twitter exploded with questions and complaints and it seems that most people aren’t feeling very happy about the new collaboration. One user said that Heinz had lost the plot.

Someone needs to have a word with your taste testers. They’ve lost the plot! 🤮🤮🤮🤮🤮🤮🤮

Some people were very, very unhappy.

I am curled up in the fetal position waiting for you to take this back.

If Satan was a condiment. This is it.

Then there were those who thought it might be worth a try – but only after you’ve had a few drinks.

Others were adamant that some things should never be tampered with, and that includes mayo and chocolate.

Cadbury and Heinz aren’t bothered by the negative criticism

Many on Twitter thought that it might be a late April Fools joke, but it seems that the new mayo is indeed the real deal and Cadbury and Heinz are very unbothered by all the negative criticism.

Along with the announcement of the new mayo, Cadbury and Heinz said that the new spread was created “in a moment of taste bud tingling brilliance.” We honestly can’t say whether it’s all that brilliant since we can’t get it over here in the US. They also gave some tips for how you can enjoy it – it is meant to dollop on waffles or crumpets in true UK style. Okay, we still don’t know how we’d enjoy it the American way. Is this something you could possibly put on a bagel without being sentenced to death? That is if it’s any good at all.

Okay, how the heck does this taste?

The brand was very vague about how exactly the new concoction tastes. The only descriptive word the general population could get out of them was “scrumptious”. Heinz brand manager Martina Davis added that the new combination is unlike anything anyone has ever tasted before, saying it’s “a true taste sensation! If everyone loves it as much as we do, then who knows, we might have to roll it out nationwide one day.”

We can’t decide whether the possibility of it being distributed nationwide is a good or a bad thing. On the one hand, we’re pretty curious how it tastes, and on the other hand, we’re really skeptical whether it could be any good at all. Then again, it might become one of those weird concoctions that everyone grows to love. As with all things, you can’t judge it before you tried it.

Bad Yogis in the UK who are reading this, have you tried it? Do you recommend it? Are we lucky that we don’t have it or are we missing out? Please tell us in the comments!