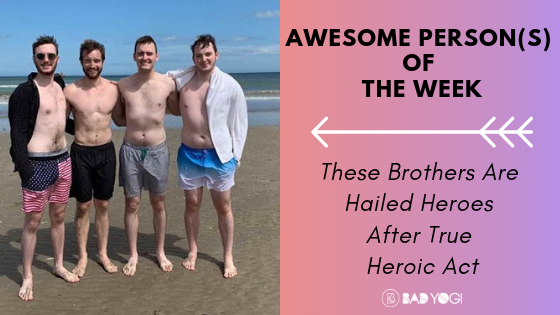 Awesome Person(s) of the Week: These Brothers Are Hailed Heroes After True Heroic Act

It’s summer, and with heat waves seeming to hit the whole Northern Hemisphere from every angle, people are enjoying themselves by the poolside or at the beach. That’s exactly what four brothers were doing at Portmarnock Beach in Dublin when potential disaster struck.

Saving a life while honoring another

According to Today, Eoghan Butler, 18, his twin brother Declan Butler, 18, Walter Butler, 21, and their brother-in-law Alex Thomson, 24, was visiting Ireland to honor their late grandfather, but they could never have expected to save another life while doing so.

Shortly after the brothers arrived at the beach, they noticed that a young girl was drifting out to sea on a pink flamingo raft. The girl’s father noticed, and started yelling for help, but there were no lifeguards around. The brothers didn’t think twice, they jumped into the water and started swimming to the girl’s rescue. Walter Butler recalls how he and his brothers just went into the water without thinking, they just knew they had to help save the girl: “My instinct was ‘swim,’ it was ‘get to the girl.’ By the time we started thinking we were already swimming.”

Working together as a team

Luck was on the girl’s side – Walter was a rescue swimmer with the Coast Guard from 2017 to 2018, and he knew how to handle the situation. Once he and his brothers were in the water and he started to think things through, he told Alex to swim back to shore in case the girl would need resuscitation.

For some, the situation might’ve seemed really dire, but after 25 minutes of swimming, the brothers reached the girl, who had drifted about a mile from the shore. Her father, who tried to help, had to be brought back to land by one of Walter’s brothers because he got too tired. The remaining brothers brought the girl back to land safe and unharmed. For them, the entire event was more than just a rescue mission – it felt right that they got to save a life while honoring their grandfather’s. 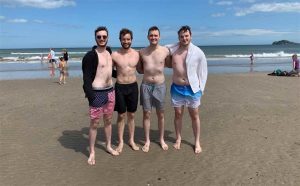 Walter also explained that the date of the rescue, July 22, was actually quite odd, because that’s the exact date that his grandfather had learned that his own brother had drowned 64 years ago. Life is funny that way, eh?

The little girl’s father was, of course, incredibly thankful. The next day, the girl, along with the rest of her family, came to visit the men that saved her life to thank them with cards and a box of chocolate.

For the brothers, the event served as a means to help ease the pain over their grandfather’s passing. Walter called it a “big moment”, adding that it was a fitting way to honor the end of his grandfather’s life.

Quick thinking and teamwork are incredibly valuable in situations like the one the brothers found themselves in. If it hadn’t been for them, the little girl might not have made it out of the ocean alive. They are truly heroes. Nothing can beat the feeling of literally saving someone’s life, and how fitting that they got to do so while honoring the life of someone who had passed on.