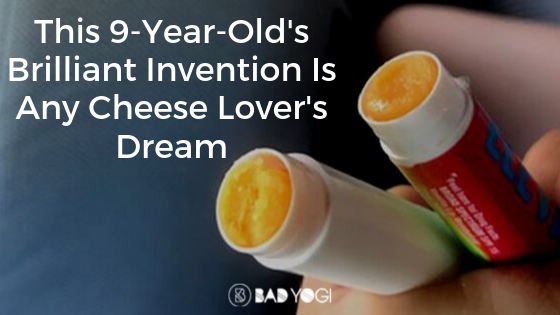 Calling all cheese lovers: There’s a hack you need to know about that will allow you to enjoy your favorite snack wherever you go, and it was “invented” by a 9-year-old.

If, in true Bad Yogi fashion, you’ve always dreamed of having your favorite cheese by your side at all times (because let’s be honest, cheese and a bit of wine make everything feel fine), there now is a way you can do that without looking weird. According to Today, a 9-Year-old girl from St. Louis, Missouri, made sure of that. A cheese lover herself, she managed to put her favorite cheese in an old, cleaned lip balm tube. This meant that she could carry her cheese in her pocket, and have a little bite throughout class whenever she needed it without being noticed. Nothing short of brilliant, right?

The girl’s name, which has not been made public, made the news with her invention after her mother, Valerie Hahn, tweeted about it. The tweet went viral with over 8,000 retweets and 67,000 likes.

My 9-year-old daughter has taken an old lip balm tube and filled it with cheese so she can eat it in class. pic.twitter.com/YEAqZx2wnr

Hahn says that her daughter told her she got the idea from YouTube – it wasn’t all her own. Apparently, there are a lot of channels out there that provide students with endless ideas on how to sneak snacks into class. Hahn’s daughter got the idea from a video that used a glue stick tube to hide cheese, so she just created something more subtle. Let’s be honest, when you start nibbling on your glue stick in the office, people are going to think you lost your marbles. Lip balm is something you use on your lips, which makes nibbling on it much easier. It seems like Hahns’ daughter is indeed a genius.

The young inventor tried stuffing different cheeses in the tube and eventually settled for sharp cheddar. But how the heck did she get it in there? Hahn says it’s pretty simple: “You have to slice the cheese and use the balm tube as kind of a cookie cutter to cut discs of cheese. Then you put the cheese in the tube.” Of course, you have to make sure that the tube is cleaned properly before starting this procedure, because cheese with a hint of bubblegum or strawberry is enough to make anyone gag. Hahn says her daughter simply cleaned the tubes thoroughly with soap.

The invention is loved by teachers and classmates alike

According to Hahn, her daughter has turned into a bit of an overnight celebrity in her class. Her classmates love her invention and so does her teacher. Yup, even her teacher thought that it’s cool. “The teacher thought it was hilarious,” Hahn said. “I wrote her a note to share the story with her as it was going viral yesterday and saw her teacher after school at pickup. She said teachers were passing around the tweets and story links and dying laughing over it.”

The internet loves it too

In the meantime, Hahn’s daughter is receiving a ton of praise from cheese lovers all over the world.

Further confirmation that the future is female.

I’ve always heard necessity breeds invention, but this is next level!

Your daughter is a genius.

Here’s to the dreamers… pic.twitter.com/QEgvyGQuxd

Even the principal couldn’t be mad

The cheese tubes couldn’t have come at a better time – Hahn says that it’s the school’s standardized testing week, so everyone is going through a stressful time. Having the cheese tubes around seems to have brightened up everyone’s week. News of the cheese tubes reached the principal too, and the inventor even got a shoutout in the school’s Thursday newsletter. “The principal gave her a shoutout in the Thursday newsletter, so that’s some big-time publicity there!” Hahn said.

Her daughter is loving her five seconds of fame. She initially showed her invention to her friends during a snack break at a Girl Scout meeting. Her reaction to her friends’ excitement was a cool, “Call me Cheese Stick Girl”. Well, that sounds like a perfect brand name, don’t you think? We don’t know about you, but we’d buy it. You can take it anywhere – from boring board meetings, to your afternoon run, and even to your next yoga class. We all deserve a bit of “lip balm” after sweating it out in plank for a while.

What do you think of this invention? Would you try this at home? Let us know in the comments!