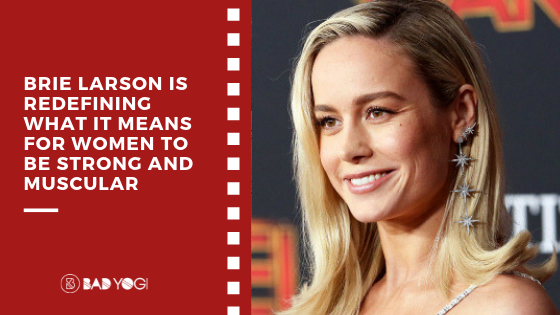 International Women’s Day was pretty eventful, even more so for Marvel fans. To put the spotlight on female power, Marvel released its first women-led superhero film “Captain Marvel” on March 8. Starring Oscar-winning actress Brie Larson as Captain Marvel, the film was expected to showcase female power like never before. Looking at Larson’s approach to her role, it is no surprise that the film is doing pretty well so far.

Brie Larson is a fitness queen

Taking on the role of Captain Marvel is no small feat, but Larson was ready for the challenge. Portraying the role of one of the mightiest superheroes in the Marvel Cinematic Universe requires you to be fit. Super fit. The Independent reports that Larson took it in her stride and for nine months she followed a tough training schedule for the film. The thing is, she actually enjoyed it. She is no stranger to hard work. Having won an Oscar and starring in films such as “21 Jump Street”, “Trainwreck”, and “Room”, Larson has been making the rounds in the industry.

It’s not about being seen as “fit”

Playing the role of pilot-turned-warrior Carol Danvers in “Captain Marvel” has taught Larson a few valuable lessons about herself and fitness. She explains that audiences might not be able to tell how strong and fit she is in the film, but going on the journey to work on her strength and stamina had a positive effect on her performance and mindset. That totally makes sense – we all know that a good dose of exercise does wonders for the mind and soul. Apparently the same counts for playing the role of a superhero.

Larson told InStyle magazine that she can actually lift 225 pounds, adding that even though this is a personal accomplishment for her, the movie isn’t going to look any different because of it. Her newfound strength doesn’t really matter to anyone else, but it does matter to her and that’s what is important. “Breaking that boundary of what it means for a woman to be muscular and strong and own your body and use it as a tool, that felt meaningful,” she said. She added that putting her physicality to the test for the role of Captain Marvel gave her a new “sense of ownership” and she wants to try and hold on to that feeling for the rest of her life. She is determined to prove naysayers wrong, explaining that people sometimes underestimate her abilities. “I do believe in my abilities, and I do value myself, and I do know that I’m strong, and I do know that I can do a lot of things that people don’t think I can do,” she said.

Even Brie Larson sometimes doubt herself

Larson admits that she didn’t originally think it was possible for her to train so hard for nine months, but she did it. Looking back, she says that the “why” behind it all was to be able to discuss what it’s like to feel strong, to discuss what it’s like being a woman and a self-identified female. “I want to start those conversations and highlight that I went from not feeling like I was capable of that to really being able to embody this in a new way,” she added.

On her bad-ass character in “Captain Marvel”

According to the Independent, Larson describes her character in the film as “remarkable”. Carol Danvers was a strong and impressive woman before she became a superhero and according to Larson, that is what makes her so unique. She had amazing qualities while she was a simple human being and those qualities simply manifested themselves in her superpowers. 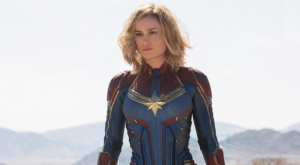 Larson confesses that many people have asked her how she deals with the pressure of starring in such a huge film, but that she doesn’t really feel any pressure. She explains that feeling pressure won’t help her or the story. She just really loved her character and focused on doing the best job she possibly could. If you had seen the film already, you’ll know that she did indeed do a stunning job.

Larson is a real-life superhero too

Larson also went on her own real-life superhero expedition this past weekend. She made a surprise appearance at the AMC cinema in Clifton Commons, New Jersey during the screening of “Captain Marvel” and served popcorn and drinks to fans. She even looked the part, dressed in a “Captain Marvel” tracksuit. She told fans that she heard her face was on the cups and popcorn and she just had to see it for herself. She also used the opportunity to thank them for coming out to watch the movie. Afterward, she took some pictures with fans. We wish we were there.

#CaptainMarvel herself, @brielarson, popped in to theaters on Saturday night to surprise fans on opening weekend! #HigherFurtherFaster pic.twitter.com/TP7Nt8KkiE

In the meantime, it had been revealed that behind “Avengers: Infinity War”, “Captain Marvel” has the largest global opening for any superhero movie and the sixth best global box office premiere ever. Larson’s hard work was definitely worth it.

Something all of us can learn from Larson’ journey during this film is her approach to fitness and how she didn’t really do it for the film, but for herself. Sometimes we can all get a little caught up in the hype from the outside world. Larson has more reason than anyone to want to be “seen” being fit and strong and yet it didn’t matter to her that few will notice it. She did it for herself, not so that it will be noticed by millions of people all over the world who watch her on the big screen.