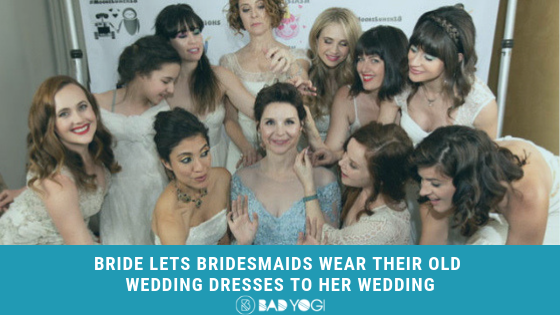 In the spirit of Valentine’s Day and what many like to call the month of love, it is great when one stumbles upon love stories (and weddings) that are somewhat out of the ordinary.

If there’s ever been an unconventional wedding, it must be actress Audrey Moore’s. You might recognize her name from shows like “Better Call Saul” and “Godless” and being a creative person, she made sure she had a wedding that embodied it.

Marrying writer Jesse Lumen last year on December 30, she knew that he would be on board for a wedding that was anything but traditional. Moore explained to HuffPost that she and Lumen don’t take things too seriously and their main goal for their wedding was to celebrate friends, family, and of course – love. They just wanted to have a wedding that they wanted to go to.

BBC reported that Moore’s approach was one that would probably be any other bride’s nightmare – she asked all her friends to wear their own wedding dresses to her wedding. Most of her friends had already gotten married, and those who hadn’t were encouraged to wear their mothers’ wedding dress or simply get a costume. Moore got the idea when a lot of her friends told her that they were sad that they only got to wear their wedding gown once. In a moment of enlightenment, Moore decided that it would be a brilliant idea to give her friends a chance to wear their dresses again at her wedding. “When people spend so much money on a dress it’s great if they wear it again and feel magical as many times as they like,” she said. 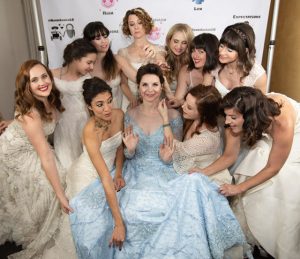 Audrey Moore at her wedding with her best friends, all dressed in their own wedding gowns.
Image: Victoria Kait and Circumpunct Studios

Moore said that many of her friends were skeptical of the idea at first, not wanting to upstage her at her own wedding, but having been to most of their weddings, she had a pretty good idea what they would look like and also knew that most of them would be in white. Her own dress was blue, looking a lot like the Disney Princess Elsa’s, so she stood out regardless. She even told HuffPost that she dared her friends to upstage her, because it didn’t really matter – she just wanted everyone to celebrate how magical they are. Lumen posted a photo of the wedding on Reddit, and it soon went viral, with thousands of people embracing the concept.

Having friends who mostly work in the film and acting industry, Moore and Lumen didn’t want their wedding to be a financial burden to their guests. The ladies were sorted out – they were wearing their old wedding dresses, but there had to be something fun for the men too. Since most of their guests work in the entertainment industry, Moore and Lumen knew they had to have costumes stashed away somewhere, so all the guys were encouraged to dress up in their favorite costumes or wear whatever they wanted if costumes weren’t the way they wanted to go. 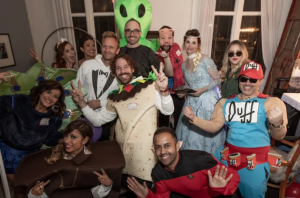 The guys wore whatever they wanted or dressed up in fun costumes.
Image: Victoria Kait and Circumpunct Studios

While her dress was being made, Moore noticed that it closely resembled that of Elsa’s in “Frozen”, and at the wedding’s reception, she added some extra accessories to make the look more real, fitting in perfectly with the rest of the guests who were wearing costumes. 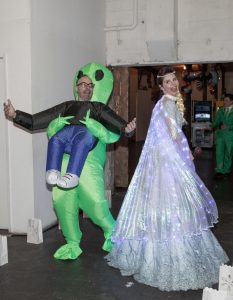 Moore and Lumen at their wedding reception.
Image: Victoria Kait and Circumpunct Studios

White Hoodie Tuxedos was a go

The only question you might still be asking right now is what Lumen and his groomsmen were wearing. They, of course, also went the non-traditional way and it’s pretty cool. Moore said that the first time she met Lumen, he was wearing a white hoodie and that’s the piece of clothing he looks most handsome in. Thus it came as no surprise when Lumen and his groomsmen decided to wear white tuxedo hoodies. 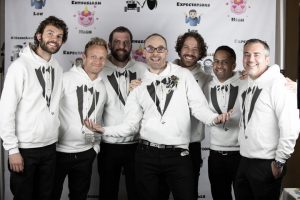 Lumen and his groomsmen all wore hoodie tuxedos instead of the usual formal wear.
Image: Victoria Kait and Circumpunct Studios

Moore’s husband walked her down the aisle

The dress code wasn’t the only thing that was unconventional about the wedding – Moore also walked down the aisle on the “Game of Thrones” theme song and since she had no living family left to accompany her, Lumen was the one who did. Yes, her husband walked her down the aisle. This might be the first time such a thing has ever happened. 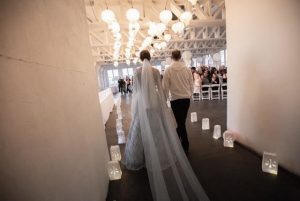 It was the couple’s dream wedding

Looking back at the wedding, Moore remembers it as “wonderful”, saying that the wedding was truly an extension of who she and Lumen are as a couple and that she believes that is exactly what a wedding should be. 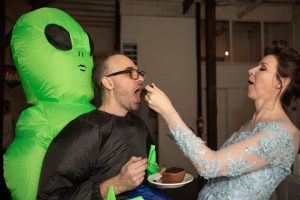 Lumen and Moore enjoying some of the wedding cake at the reception.
Image: Victoria Kait and Circumpunct Studios

The wedding and its theme might have been completely out of the ordinary, but in a world where so many things have become a cliché – even love, Moore and Lumen’s wedding truly stood out. Not only was it completely light and fun, but it was also exactly what they wanted without costing any of the guests a fortune to attend. There’s definitely nothing wrong with a traditional wedding, but Moore and Lumen’s are proof that the non-traditional way can also be fun and classy. 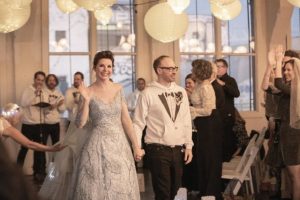