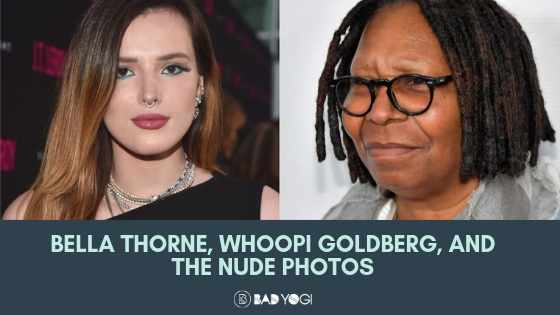 If you were on Twitter or Instagram these past few days, you might have noticed that there was a bit of a disagreement going on between former Disney star Bella Thorne and Whoopi Goldberg. The reason? Well, according to Billboard, Bella Thorne posted some nudes of herself on Twitter after she was hacked and threatened with the pictures. She then decided to release those very pictures herself to take back her power from the hacker. Many applauded Thorne’s actions, but Whoopi Goldberg thought that Thorne could’ve prevented the situation altogether.

Taking back the power

The topic of women expressing their sexuality and showing off their bodies however they want remains a sensitive topic. Celebrities’ social media accounts and cloud get hacked all the time, and it has to be incredibly frustrating to have your privacy invaded like that. Thorne was clearly sick of it. When she released the nude pictures on Twitter over the weekend, she added a caption that read, “I can sleep [better tonight] knowing I took my power back. U can’t control my life, u never will.” Well, good for her – she made the choice to release those pictures of herself to show the hacker that they had no power over her, that she was comfortable enough with her body to show them to the world.

Whoopi Goldberg has a different stance on the matter

According to Glamour, the story really blew up on Monday after it became a talking point on The View, of which Goldberg is a cohost. The topic came up and co-host Sunny Hostin defended Thorne’s actions, saying, “It just saddens me that these kids have to go through this. For someone to extort her or threaten her with posting these pictures, it’s terrible.” Goldberg, however, has never been known to beat around the bush and didn’t hesitate to disagree with Hostin, saying,” If you’re famous, I don’t care how old you are, you don’t take nude pictures of yourself. Once you take that picture, it goes into the cloud, and it’s available to any hacker who wants it. And if you don’t know that in 2019 that this is an issue, I’m sorry. You don’t get to do that.”

BELLA THORNE POSTS NUDE PICS TO THWART HACKER: Actress Bella Thorne said she took her “power back” by sharing nude photos of herself after blackmailers threatened to leak them – the co-hosts discuss if this was the right move. https://t.co/1091s9Fn2d pic.twitter.com/VqFXmggPle

Needless to say, once Thorne heard what Goldberg had said, she wasn’t happy at all. She took to Instagram to tell Whoopi how disappointed she was in her and also posted several stories in which she was clearly very emotional, saying that Goldberg’s comments made her feel disgusting. “Whoopi, now that everyone’s seen my sh*t, I hope you’re so f*cking happy…. I can only imagine all the kids who have their sh*t released and then they commit suicide. You’re so crazy for thinking such terrible things on such an awful situation,” she said in one of the videos. “Shame on you, Whoopi,” she continued. “Shame on you for putting that public opinion out there like that for every young girl to think that they’re disgusting for even taking a photo like that. Shame on you.”

One of Thorne’s fans took to Twitter to put up a video of her Instagram stories in which she was addressing Goldberg.

Bella Thorne responds to what Whoopi Goldberg said about her on #theView, & what she said was messed up 😡 | via Instagram | pic.twitter.com/UYiCHp32xJ

Thorne also posted an image of a note addressed to Whoopi in which she says that she’s always admired her but that she is “displeased and saddened” by her comments and that blaming girls for taking nude pictures in the first place is “honestly sick and disgusting”. She also canceled her upcoming appearance on The View, saying, “I was supposed to be on The View, but honestly I don’t feel like being beaten down by a bunch of older women for my body and my sexuality.” 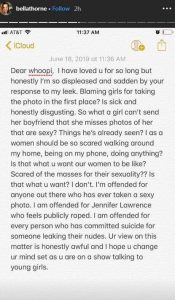 Goldberg’s advice is not that far-fetched

So, who’s really in the wrong here? Probably neither one of them. What Whoopi said makes total sense. When you’re a celebrity, you have to deal with the fact that people will always try to invade your privacy in any way possible. Yes, you want to express your sexuality and show off your body like any other non-famous woman out there, but you need to know that the chances of those pictures getting hacked are always there. If you don’t want to find yourself in Thorne’s situation, you need to think twice before taking them. It’s part of the price you need to pay for being famous. Life isn’t fair, and Goldberg seems to get that.

Thorne, on the other hand, is entitled to her opinion as much as Goldberg, but she probably didn’t need to react the way she had to Goldberg’s comments. She could’ve handled it differently – she could even have ignored it. She did what she did because she refused to let some stranger control her life. That’s great. Goldberg wasn’t attacking Thorne directly – she didn’t call her ugly or a slut, she actually just gave some sound advice. Thorne and every other celebrity out there could take it or leave it. For Thorne to say that Goldberg’s comment made her feel “disgusting” is blowing things out of proportion – Goldberg didn’t say anything that could lead to anyone feeling disgusting. She simply advised famous people to steer clear of nude pictures if they don’t want it splattered all over the internet, which, in fact, is pretty sound advice.

There’s a lesson for all of us here

Perhaps there’s a lesson to be learned here by all celebrities (and us normal people) out there. If you don’t want your nudes on the internet, don’t take them. If you do, know that you’re taking a risk and prepare yourself for the possible consequences. If you don’t mind other people seeing them, that’s all good too. Then take as many as you like. Just remember – if you want other people to respect your body, you first need to respect it yourself – whatever that means to you personally. If there are certain things about your personal life that you don’t want others to see, don’t put yourself in a position where they can. If you don’t want hackers to have power over you, don’t give them the means to gain it – whether that means you don’t take nude pictures at all or take the initiative to post them yourself when push comes to shove.

Remember: You’re responsible for your actions

In the end, we’re responsible for our actions – no one else. The best thing Thorne could’ve done in this situation is to take the criticism with grace. She made her decision, and if she’s happy with it, she shouldn’t let anyone else’s opinion matter, let alone have a breakdown over it on social media and blowing what was said out of proportion. You’re doing yourself a disservice by doing so.

Let your actions do the talking

Now, everyone will remember the backlash Thorne gave Goldberg instead of the great thing she did by taking back her power from a hacker.  When you do something bold like releasing your nudes to prove a point, you should allow that to do the talking and not engage in any sort of back and forth with people who don’t agree. We all have the right to an opinion. Goldberg did in no way shame Thorne’s actions – she simply suggested a solution to the problem. Take it or leave it. It’s as simple as that.

What is your stance on all this? Drop your thoughts in the comments.