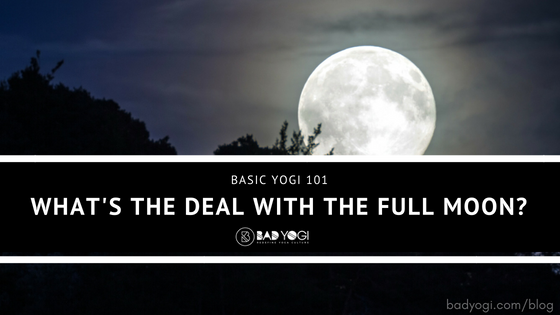 BASIC YOGI 101: WHAT’S THE DEAL WITH THE FULL MOON?

Basic Yogi 101’ is a new section of Bad Yogi Magazine, where our goal is to provide you with information, on the most basic level, about various topics in yoga that might seem a bit more confusing than we think. Have a request? Let us know and we’re happy to break it down for you!

On the last new moon, we wrote about the significance of a new moon, and why yogis around the world get all excited about the lunar cycle. Let’s round out the topic a bit more by talking about tonight’s full moon a bit, shall we?

The full moon is the energetic climax of the month and the moon’s 28-day cycle. Full moons are intended to bring things to a head, or to a close. It’s a time of intense intuition and psychic energy; a time to release things that no longer serve us; a time where we are encouraged to begin to wrap-up goals or intentions set on the last new moon; and, of course, a time to charge your crystals in the full moon light. Basically, the full moon is about adulting and prioritizing things that are important.

Here are a few of the rituals yogis around the world might be participating in on a full moon:

This deserves its own post, and someday, I’ll get a better understanding of why people charge their crystals and what, exactly, that’s all about… but for today, here’s your mini lesson: during the full moon, people will take crystals (including precious jewels like an engagement or wedding ring, and also malas) out to charge under the full moon light. It’s said to cleanse and also charge them with the power of the full moon. The “charging” of these crystals intensifies the characteristics of the particular crystal… one time (only) I set my diamond engagement ring out during a full moon, while at a yoga retreat, and set an intention for it to bring me even move love and happiness into my marriage. ¯\_(ツ)_/¯

A BLOOD MOON IN LEO

Back to astrology again- these things just go hand in hand. With Mercury retrograde and entering Leo yesterday, it’s said that this moon can really affect us, whether we’re a Leo or not.

Leo season is said to be a time where we are confident, positive and more sure of ourselves, but this blood moon and lunar eclipse might just try to dull our shine a bit. When we combine EVERYTHING that is going on right now with Mercury, the full moon, and also being Leo season where we tend to be more outspoken, it can be a tricky combo.

Astrostyle says, “Leo is ruled by the proud and regal Sun, the center of our solar system. During Leo season, we may occasionally, um, forget that the world doesn’t revolve around us. Egos can run amok. Defending our ‘honor’ or ‘principles’ can start to sound a lot like bullying and bigotry.”

In short, the energy from both the blood moon and the Leo season vibes can result in us saying some things we might end up regretting.

SOME FACTS ABOUT THIS PARTICULAR FULL MOON (JULY 27)