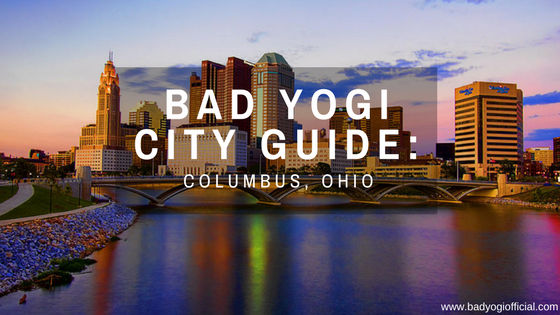 It is really difficult to separate Columbus, OH from the 5 counties that surround it. Collectively the area is known as Central Ohio. It’s this writer’s opinion that Columbus and central Ohio is the unknown gem of the Midwest. Yes, even though we are on the far eastern edge, we are considered part of the Midwest. The area is the most populous in the state. The people are friendly. The pace of life is may not be as laid back as a coastal beach town, but it’s not as intense as LA or NYC. It‘s somewhere in between.

Yoga on High (Columbus): – probably the best-known studio in the area. They offer anything from Hatha to Pre-Natal to Aerial to paddleboard classes. Many of the teachers in the area are graduates of teacher training program

Thank Yoga (Columbus): – I was first introduced to the wonderful teachers from Thank Yoga at a benefit Yoga class they were holding for the Hospice of Central Ohio.

Modo Yoga (Columbus): – A newer studio to the area, but well worth a visit if you’re in town. They also have unusual offering, wedding packages! They have pre-wedding, private wedding party, and wedding day events. As their website says “All to help you start your special day with a calm mind and fit body, for an inspired life”.

Kasa Yoga (Worthington): a quaint studio situated in Old Worthington. It’s owner describes it as a home away from home, offering yoga, reiki, ayurveda, meditation. Although I don’t make it here as often as I would like, I am always welcomed as if I were there every day

Breathe Yoga (Granville): This is the author’s home studio. So I may be a touch biased. Such a friendly and open atmosphere. Offerings at Breathe include a book club, outdoor yoga w/ brunch, Ravi, healthy eating, Glow Yoga and more

Sage Yoga (Newark): Located in the beautiful restored building featuring 31 West music venue and Bootleggers pub, and Moe’s BBQ, this studio and it’s teachers welcome all levels to their Restorative, Chair, Yin, and Vinyasa classes. For an extra treat try their outdoor Yoga at the Dawes Arboretum Japanese Garden. Columbus is well known for is well known for restaurants of all types. The Short North area in Columbus is of special interest. It has open area café’s, fine dining establishments, casual faire, craft beer breweries and bars of all types. The area is very friendly to the LGBTQ+ community. For the morning folk, coffee shops abound. The Short North is also Columbus’ art gallery center. A “gallery Hop” is held 2 nights a week drawing thousands of people to the area.

Out in Granville, right down the street from Breathe Yoga, you’ll find Snap Shots. It’s the best little restaurant in the area. The staff works hard to know every person coming through their door. They host casual dining, specialty sandwiches to order, brick oven pizza’s and a full wine and bar.

Get outside & be active:

Central Ohio has so many options. There are the Columbus Metro Parks. The Ohio State University has a hidden gem called the Ohio Adventure Center (OAC). Although it is primarily for students and faculty of the university, they also are open to the public. You can practice your indoor rock climbing or join a kayaking trip to the Everglades. Come spend a day at the Columbus Zoo, the largest zoo in the United States.

If you’re interested in day trips, east of Columbus you’ll find Dawes Arboretum and the Denison University Biological Reserve. To the north is Alum Creek State Park and Reservoir. Two hours farther you’ll find the Rock and Roll Hall of Fame in Cleveland. An hour south is the Hocking Hills State Park All are great places to hike, picnic, and just spend a day outside to enjoy the natural wonders surrounding you.

An hour and a half to the northeast is Holmes County. There you will find the second largest community of Amish outside of Pennsylvania.

If you’re felling less than active:

The Arts community in Central Ohio rivals any eastern city. The Ohio and Palace theaters are pert of all national Broadway tours. The Columbus Museum of Art is constantly ranked as one of the best in the country.

If you’re into watching sports:

Columbus is the home of the Ohio State Buckeyes and the pro hockey team the Columbus Blue Jackets. Unfortunately, that’s pretty much it. For any other sports, you have to travel elsewhere

There are so many shops and specialty boutiques around. Again the Short North area is a great place to start. For larger nationally known stores there is the Polaris Mall or the Easton Town Center. 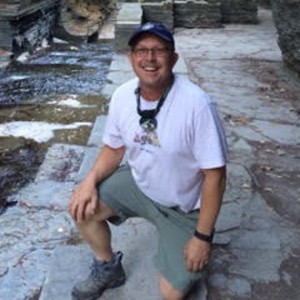