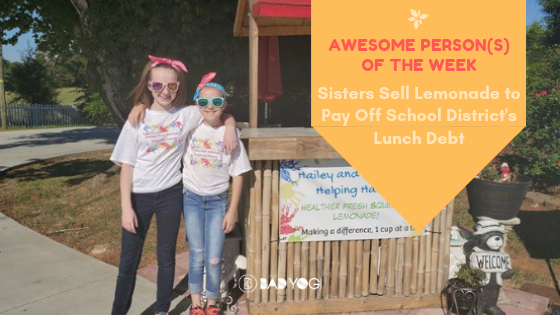 Two young girls from Lexington, North Carolina, are making a difference in their hometown, one cup of lemonade at a time. According to Today, they’ve been using a lemonade stand their mother bought them last year to raise money for good causes, the first of which was the local hospice where their grandfather resided. Now, they are raising funds to help pay off the North Carolina school district’s lunch money debt, which is over $41,000.

Helping others, one cup of lemonade at a time

The two masterminds behind the lemonade stand are sisters Hannah, 11, and Hailey, 13. After raising funds for the hospice, they were looking for new places they could help, so they jumped onto the internet to research children’s homes in their hometown’s neighboring communities to find out which of them needed a helping hand. Shortly after the sisters started their research, their principal told them that there are actually families in their own school’s neighborhood that were struggling to pay for their kids’ lunches at school. 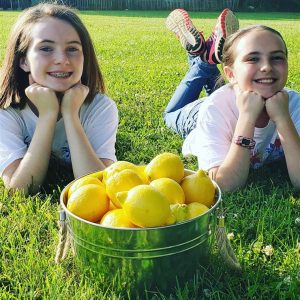 Hannah and Hailey decided to use their lemonade stand for good.
Image courtesy of Erin Hager

The girls’ mother, Erin Hager, said that the school called her and told her that they had a lot of cafeteria debt and that they would appreciate any help they could get. Hager realized that her girls’ lemonade stand was the perfect answer to the school’s problems. They were looking for someone to help, and the school needed help desperately.

Getting to work to make a difference

Hannah and Hailey set up their lemonade stand, called “Hailey and Hanna’s Helping Hands”, on May 18, selling lemonade for $1 a cup. The day after, they took it a step further, selling lunch-and-lemonade combos for $5 a pop. They are true entrepreneurs too – they worked double time to serve a large group of motorcyclists who stopped by their stand, as well as patrons. That first weekend, the girls raised $460, which will all be donated to Southwood Elementary where Hannah goes to school. Their next earnings will go toward paying off Central Middle’s and then the local high school’s debt, after which they will slowly but surely pay off all the debts of the remaining 33 schools in the district. 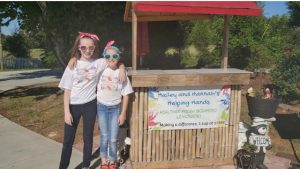 Hailey and Hannah are helping others, one cup of lemonade at a time.
Image courtesy of Erin Hager

Hannah and Hailey also want to use their platform to create more awareness around “lunch shaming”.  They are using their lemonade stand’s Facebook page to do this. “Lunch Shaming” is a national issue in the US – it basically means that children whose parents owe lunch money experience the consequences in front of all of their peers, making it obvious to everyone that their parents are in a difficult financial position.

Hannah and Hailey have never been in a situation of “lunch shaming” and want to prevent others from experiencing it.
Image courtesy of Erin Hager

Certain rules apply to kids who have an outstanding lunch bill, depending on the school district. The repercussions range from serving these kids an off-menu option to only serving them cold meals. For example, a district in Warwick, Rhode Island, would only serve cold cheese sandwiches to kids who couldn’t pay, while other schools would not allow these kids to take part in special activities like field trips or dances. Some schools would even withhold certain privileges, like allowing students to take part in graduation ceremonies.

“Lunch shaming” is in no way fair to the kids who fall victim to it. They can’t help that their parents are struggling financially, so it’s great that Hannah and Hailey are trying to address this issue as well.

Everyone is very proud of Hannah and Hailey

Their mother is very excited about the girl’s endeavors, saying that the possibilities are endless and that the support has been absolutely phenomenal. By Tuesday after Memorial Day, Hannah and Hailey had raised enough money to cover all the debts owed to Hannah’s school. Emily Lipe, superintendent of Davidson County Schools, said that she is incredibly proud of the girls: “We are incredibly proud of these girls for this tremendous show of selflessness, compassion, and willingness to be empathetic toward their peers.”

Take the time to do something for your community

Offering up your time to sell lemonade over weekends to help your school peers and schools all over the district is a true act of selflessness and compassion. Hopefully, more kids will follow Hannah and Hailey’s example, and perhaps a few adults too. We can all try to do whatever we can to help the community we live in, regardless of our age. If everyone did something small to help those who need it in their close community, imagine what an amazing place the world could become.