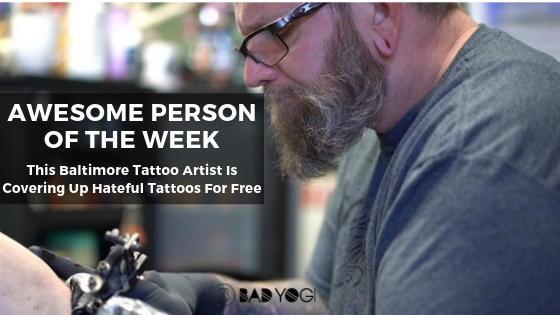 Awesome Person of the Week: This Baltimore Tattoo Artist Is Covering Up Hateful Tattoos For Free

Those of us who have tattoos know that getting inked is not cheap, but a tattoo artist in Baltimore has shown his community that he doesn’t only do it for the money – he does it for the art and the meaning behind it.

Yahoo Finance reports that David Cutlip noticed that there were a lot of people coming to his parlor, South Side Tattoo, to cover up tattoos they got while in prison or while belonging to gangs. They all wanted to turn over a new leaf and the first step was covering up the tattoos that tied them to their past. Working with all these people, Cutlip decided that he wanted to help more people like them and made the decision to start offering his services for free to people who want to cover up racist or gang-related tattoos.

He started off by posting a message on South Side Tattoo’s Facebook page that read, “If you have a racist or gang-related tattoo and need help, we will cover them for free. No questions asked.” The next morning, he woke up to more than 2,000 emails from people who wanted to take him up on his offer. Now, he has set out on a cross-country trip to provide his services to those people.

Redemption Ink is helping people to turn over a new leaf

Cutlip now runs the non-profit organization formerly known as the “Random Acts of Tattoo Project”. The name has now been shortened to “Redemption Ink”. The project is funded by a GoFundMe that was set up for him by total strangers. This allows him to buy all the supplies he needs to cover up the tattoos for free. Cutlip empathizes with people who are looking for a second chance. “People change. They do. Everybody makes mistakes, man. And people deserve a second chance. They’re humans, man. We’re all humans.” 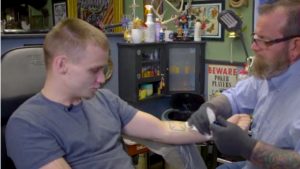 David Cutlip is covering up hateful tattoos for free.
Image courtesy of ABC 10

Recently, Cutlip had to halt his services after his parlor had to close temporarily due to construction. He decided that it was as good a time as any to take his endeavors on the road, thinking that it would be easier for his clients as well. “If you can’t afford a tattoo then you probably can’t afford the gas to drive there, so why not go to where they are and see if I can help them? All I can do is try,” he said.

One of Cutlip’s first clients during his travels was Jeff Turco, who had gotten a tattoo of an Iron Cross (which is commonly perceived as a Nazi symbol) during his time in jail. He regretted it, saying that back then he was impressionable and very hateful and that he’s no longer that person. “It’s not a representation of how I feel today… Once I started getting out and seeing people I started realizing that ain’t nobody ever done nothing wrong to me,” he said. Cutlip had his work cut out for him with Turco’s cover-up. In fact, Turco wasn’t sure Cutlip would manage it, but he did, replacing the cross with an intricate Tibetan skull, which represents a new beginning and a fresh start.

Cutlip’s selfless work soon caught the eye of GoFundMe, and needless to say, they were impressed. So much so that they decided to produce a video of Cutlip in action. They filmed him covering up the tattoo of former Ku Klux Klan member, Shane Johnson. He was born into the gang and spent many years involved in violence before he started to condemn racism. He very badly wanted to erase all of his hateful tattoos before the birth of his son, and Cutlip gladly did it for him.

Cutlip actually wanted to be a musician

Cutlip, who also sports some cool ink, didn’t initially want to be a tattoo artist – he wanted to be a musician. Unfortunately, his gigs didn’t pay enough and he had to start looking for other career options. “Somebody had once mentioned that tattooing was the next best thing to being a rock star. I kind of checked into it, and it really was,” he said. He doesn’t regret the decision one bit, saying that his career is truly fulfilling and that he takes the art very seriously, adding: “My favorite part is getting to know somebody. It very much is an intimate process. You’re letting someone draw on you [permanently].”

Cutlip has covered about 80 tattoos to date, and he’s far from done. Each cover-up takes him about 5 hours, sometimes even longer. He doesn’t mind putting in the time though, saying that the people’s he’s met are good people and that they deserve respect. “…I do believe that you have to earn the respect, but if they’re working hard, then that’s the respect they deserve, because they’re trying. That’s what I say.”

We couldn’t agree more. You might know someone who is trying to turn over a new leaf, you might even be that someone. It’s good to know that there are still people like Cutlip who believe in second chances. After all, sometimes the only push people need is the knowledge that someone actually believes that they can change.