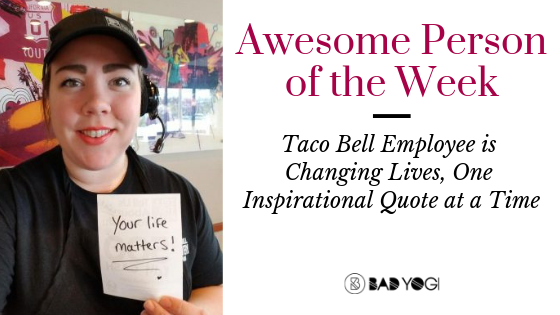 Awesome Person of the Week: Taco Bell Employee is Changing Lives, One Inspirational Quote at a Time

It has been proven over and over again that small acts of kindness can have a massive impact. The awesome person of this week has proved that this statement still rings true. Put your hands together for 27-year-old Kelly Stewart, ambassador of positivity.

Kelly Stewart is changing the world one quote at a time

Yahoo Lifestyle reported that Stewart, who only started working at Taco Bell in the fall last year, has already made an amazing impact on the customers.

Stewart decided to take her new job seriously and since she was working with people all day, she decided that she could just as well do her bit to brighten up their day. Her idea is simple, but amazing – she started writing down her favorite quotes and putting them in customers’ takeout. 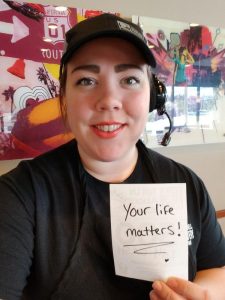 Customers are loving her initiative

Heather O’Donnell, who was one of the lucky customers to get an inspirational quote in her takeout, was delighted when she found it. “I got this message that said ‘when you reach the end of your rope tie a knot around it and hang on— Franklin D. Roosevelt,'” she said and added that knowing someone had taken some time out of their day to write down a quote to put in her order made her smile and also reminded her that there are still some good people in the world.

Many other customers had found Stewart’s quotes in their takeout and loving the initiative, they started sharing it on social media, spreading the positivity. One customer praised Stewart’s efforts, saying that they are sure the kind quotes meant more than the food to some. Another said, “This must be a really special individual….corporate needs to know about this employee so they can show their appreciation.”

Stewart, of course, hadn’t expected people to react to it the way they had but is thrilled that people are loving the messages. She told Syracuse.com that she enjoys working with people and helping them to make every day a better one makes her happy. She added that she also wants to set a good example for her six-year-old son. “Sometimes life can be tough, and I like looking up quotes and writing them out for people,” she said.

Give that girl a medal

Since the story hit social media and some news outlets, many people are hoping that Stewart will receive a nod from Taco Bell corporate and we hope so too! Taking the time to write down a quote to brighten up someone else’s day is definitely worth celebrating.

Small acts of kindness always have a big impact

Stewart proves to us once again that you don’t have to be someone majorly important or have a high profile job to make a difference in other people’s lives. She might just be one of many employees at Taco Bell, but she’s anything but ordinary – she’s brightening up lives, one takeout at a time.