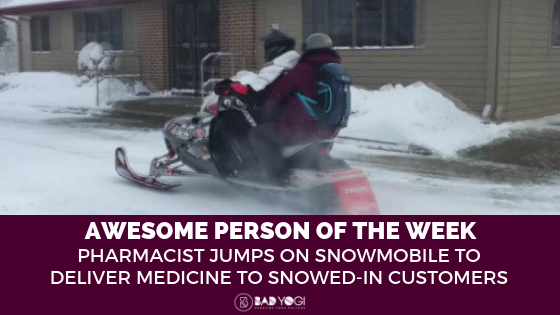 Awesome Person of the Week: Pharmacist Jumps on Snowmobile to Deliver Medicine to Snowed-In Customers

There is no denying that there is a lot of negativity in the world, and we tend to notice that before anything else. It’s time to change that – let’s start looking at the good that is happening amidst all the bad and celebrate it! That is what the Awesome Person of the Week column will be all about – celebrating those who are doing their bit to help make the world a better place, even if that means just being awesome at the small things.

We’re all aware of the polar vortex that made its way over parts of America last week, sending temperatures dropping to record lows and causing many people to be snowed-in. Being trapped in your own home means that you can’t go out to get some hot cocoa for the cold, but it also means that if you urgently need some medicine or ran out of your chronic medication, you’re in a bit of a tight spot. 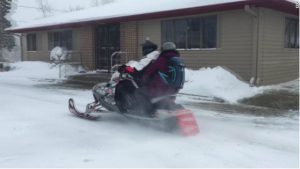 Cusack and her son used their snowmobile to deliver medication to patients
Image: CNN

Never fear when Andrea Cusack is near

The citizens of Lake Odessa, a small town between Grand Rapids and Lansing in Michigan, was lucky enough to have a disguised superhero in their midst during these trying times. Andrea Cusack, who is the town’s local pharmacist, made a plan to make sure that the citizens will still be able to get the medication they need despite the cold and snow.

What did she do to help?

CNN reported that Cusack braved the bitter cold and snow last Tuesday to ensure that customers who needed medication could still get it. With the help of her 15-year-old son, they started up their snowmobile so they could make special deliveries. Cusack told WILX that it is important that patients who suffer from chronic conditions such as blood pressure and diabetes need to take their medication continuously – and she was ensuring that they could.

On Wednesday, Cusack called some of her regular customers to check if they would be able to come pick up their monthly prescriptions. When they replied that they were snowed in, she was ready to come to their rescue. “I had simply asked, ‘Is your driveway plowed?’ and they said, ‘No.’ So I said, ‘Oh, so I might have to bring the snowmobile?’ and they said, ‘We would recommend that,'”. Cusack and her son bundled up in their warmest clothes shortly after the call and set out to make the delivery.

People on social media loved what she was doing

Cusack’s husband posted a picture on Facebook of her and their son on the snowmobile, ready to make deliveries.

The post received a lot of positive comments with people extending their thanks towards Cusack and all she was doing for the community. Even people as far as Louisiana reached out to express their thanks, saying that she was doing a “glorious thing”.

Cusack was overwhelmed by the positive response, saying that she truly cares about people and just wanted to help them. As for the rest of us who are simply looking for a ray of light in what can be a very dark world, Cusack definitely shone very brightly – providing us with the hope that there are indeed still some amazing people out there looking out for those in need.